Taiwan's largest company aims to move up the value chain; will it succeed? 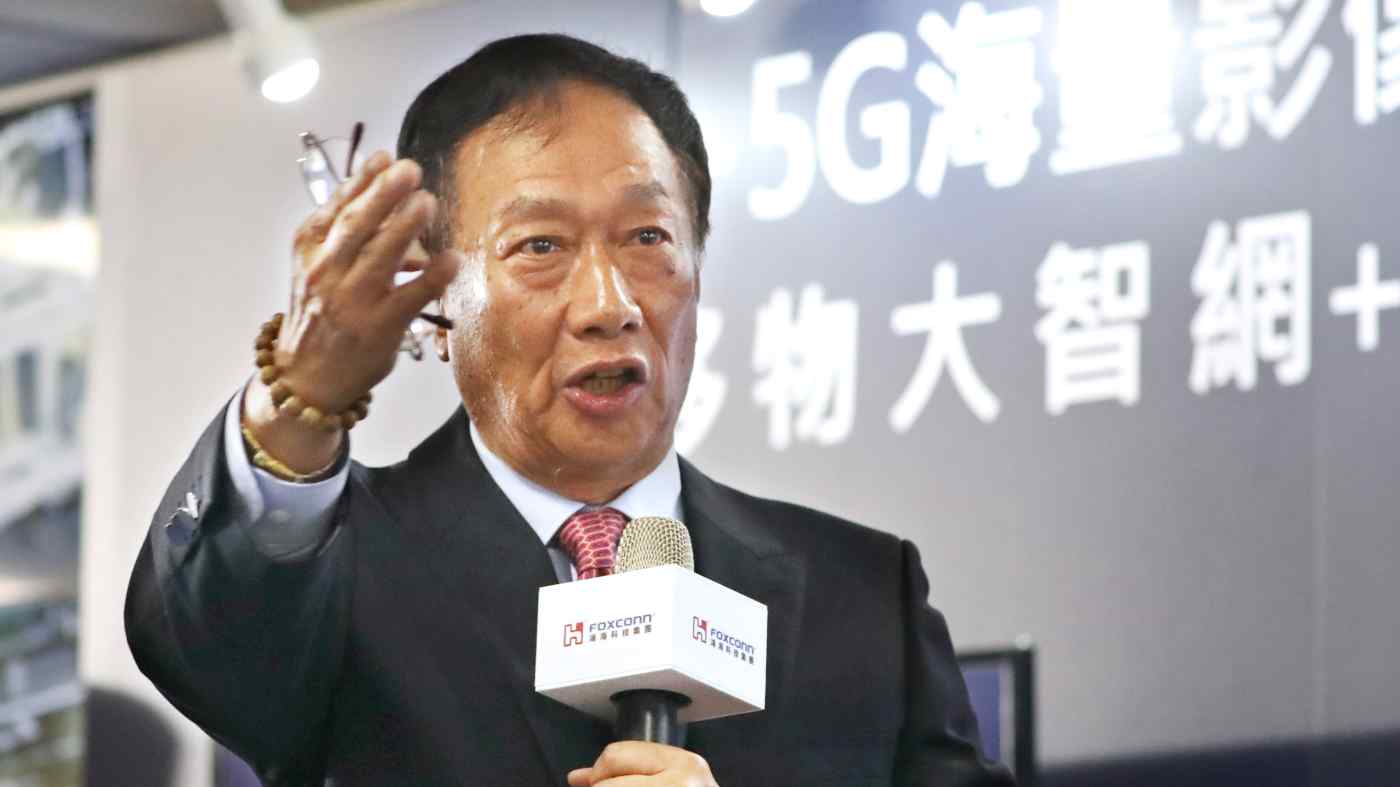 TAIPEI Terry Gou, founder and chairman of Hon Hai Precision Industry, seemed caught off guard and unprepared to talk outside his hotel in Osaka in early June when approached by a Nikkei Asian Review reporter.

But Gou soon loosened up, taking the opportunity over a 30-minute stroll to elaborate on the ambition of his company, better known as Foxconn Technology Group, to acquire the memory-chip unit of embattled Japanese industrial conglomerate Toshiba. "Apple and Amazon will be injecting funds into the deal," he said.

The episode highlights how Gou's ability to think on his feet and make snap decisions in response to an ever-changing business environment has made Foxconn what it is today. It also points to his deep ties with Apple, which treats the company as a near equal despite Foxconn's role as a contract assembler for the American consumer electronics trendsetter.

Apple's iconic handset was first introduced on June 29, 2007. Since then, Foxconn has become a household name for tech industry watchers. But Foxconn is no longer content merely to assemble products for others. It now wants to manufacture its own high-margin components to compensate for slim profits in its core assembly business. 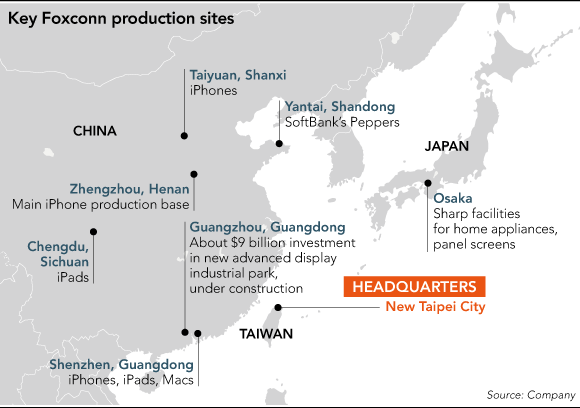 Gou is also seeking to expand his empire by developing brand-name products through acquisitions and internal projects. Sharp is helping Foxconn to achieve that goal, thanks to its popular home appliances and TVs. Nokia of Finland, which once dominated the global mobile phone market, now has an indirect licensing deal with Foxconn via a third party.

Andy Rubin, creator of Google's Android operating system for smartphones, has publicized the financial and production support Foxconn is providing for his upcoming Essential Phone. The Taiwanese company has also created a new brand for TVs and smartphones, known as InFocus, although it has gained little recognition outside its home market.

WE BUILT THIS CITY Foxconn, the world's largest contract electronics maker by revenue, employs about 700,000 people in China, down from a peak of 1 million, as it automates in response to rising wages.

The gadget assembler makes most of the iPhones at Zhengzhou, in Henan Province, which has been dubbed "iPhone City." The Zhengzhou plant, with its 90 production lines and 350,000 workers, can churn out 500,000 iPhones a day, according to Macquarie, an Australian investment bank.

Foxconn assembles about 70% of the 210 million iPhones sold each year, according to Yuanta Investment Consulting in Taipei. Its smaller Taiwanese rivals, Pegatron and Wistron, put together the rest. Foxconn has gradually shifted iPhone production from southeastern China north to Zhengzhou following a string of worker suicides at its Shenzhen plant in 2010.

Labor rights groups accused Foxconn of running production lines in a harsh, military style and forcing employees to work unreasonably long hours. Since then, the company has raised wages and offered counseling to employees. Apple has also capped the number of hours Foxconn assembly-line workers can put in each week.

Foxconn's presence in Shenzhen has boosted the local economy and young Chinese do not appear to be deterred from joining the company, judging from the long lines recently seen at a Foxconn recruiting center.

Since the beginning of the year, Foxconn shares have risen more than 40% to close at 118.5 New Taiwan dollars on July 11. The company's market value of about NT$2 trillion is larger than that of Sony or Nintendo.

The surge in the share price reflects anticipation about the upcoming premium iPhone handset, which will have an organic light-emitting diode display. Foxconn is expected to dominate assembly orders for the OLED iPhones.

In addition to iPhones, Foxconn makes iPads, Kindle e-readers for Amazon.com, game consoles for Sony and Nintendo, the humanoid robot Pepper for SoftBank Group, and servers for HP.

ACQUISITION DRIVE But while Foxconn has become Apple's main partner, it is grappling with razor-thin margins. To boost its bottom line, Foxconn is working to acquire technologies for key components.

Core processor chips and panels are the two most expensive components in a smartphone, while memory-chips are another source of profits. That is why Gou now wants to gain control of Toshiba's memory chip business, although Japanese officials are trying to block the bid, fearing sensitive technology could be leaked to China. A crowd lines up outside a Foxconn recruitment center in Shenzhen in early March. (photo by Debby Wu)

Gou realizes that continuing to rely on the assembly business will keep Foxconn's profit margins slim, as global smartphone sales are slowing. Foxconn wants to develop its own branded products.

Among the several brands it now controls, Sharp is probably the most important to Foxconn, said Vincent Chen, president of Yuanta. But he added that if it tries to grow Sharp, it could represent "a conflict of interest for Foxconn since it also makes gadgets for others. Currently, Sharp is limited to selling TVs and home appliances, two markets where most Foxconn customers do not operate," Chen said.

In addition, the TV business is tough. "It's a bit challenging for Foxconn to make profits from selling televisions only, especially when its current strategy is to offer discounts to boost shipments," said Eric Chiou, an analyst at WitsView, although TV sales could increase Foxconn's revenues. Sharp is planning to ship some 8.5 million TVs in 2017, nearly doubling last year's 4.7 million units, mainly due to strong demand in China, he added.

TRUMP FRIENDLY While relatively low labor costs in China have made the iPhone affordable for middle-class consumers worldwide and contributed to its immense success, Gou is considering establishing two panel production facilities in the U.S.

The plans are related to U.S. President Donald Trump's call for major exporters to the U.S. to set up factories in America to create jobs and avoid possible protectionist measures. In late April, Gou met Trump at the White House to discuss investment plans, possibly in Republican strongholds and swing states.

"We will provide tens of thousands of jobs," Gou told reporters in June. "It is possible [Foxconn and Sharp together] will invest more than $10 billion, not all at once, but probably over a five-year span."

The 66-year-old Gou, who is referred to within the company as "BB" for Big Boss, is still working hard to lead Foxconn's key initiatives, particularly its U.S. expansion.

He rarely stays in the same place for more than three days, traveling constantly and conducting hourslong meetings. Yet he never shows any sign of fatigue. He is also known for his keen memory and eye for detail. And that's the problem: Gou rules Foxconn like a strongman. No one in the company is as visionary and few can operate at his pace and energy level.

BIG SHOES TO FILL His 40-year-old son, Jeffrey, works for the group, but is overshadowed by his father's extraordinary achievements. His daughter, Shirley, does not appear to be interested in the family business. Gou has another three children by his second wife, but the oldest is only 8 years old. Gou has no heir apparent and has never spoken publicly about a succession plan.

Equally unclear is Foxconn's ownership structure. Gou and his longtime aide, Huang Chiu-lian, who is his first wife's aunt and Foxconn's de facto chief financial officer, have created numerous holding companies for investment and ownership purposes, like many other Asian companies.

Gou controls the Hon Hai board, even though the latest annual report shows he only owns a 12.25% stake in the company. It is unclear whether Gou holds additional shares via personal investment vehicles.

The business model that Gou has created may be a challenge for his successor to manage. Foxconn's gross profit margin is only 7%, while major electronics players like Sony and Nintendo have margins of around 40%. On the other hand, Foxconn had a net profit of close to $5 billion last year, which is about five to seven times larger than those of Sony or Nintendo.

The company's dependence on Apple for revenue has steadily increased since 2013. Last year, Apple accounted for 54% of Foxconn's revenue of NT$4.35 trillion ($142 billion), which was down 2% from 2015 due to lukewarm sales of the iPhone 7, according the company's annual report.

"Foxconn still cannot do without Apple in the future. Apple orders have become too big to lose for Foxconn," Yuanta's Chen said.