With a 49.9% stake, the Chinese automaker secures production base in Southeast Asia

The deal also reflects the growing political warmth between China and Malaysia, as Beijing seeks to expand its regional influence through trade and military ties.

The two sides announced Wednesday that they had reached a binding preliminary agreement that will give Geely a 49.9% stake in Proton. DRB-Hicom will continue to hold the majority of the shares. The deal also includes a 51% sale to Geely of U.K. sports car manufacturer Lotus. That piece of the transaction is valued at 100 million pounds ($130 million).

The partners will sign a final agreement in July and reveal the total value of the deal at that time. Apart from Lotus, the agreement will include a cash injection from Geely, and a platform to produce sport utility vehicles.

DRB did not reveal the identity of the other international bidders, one of which is believed to be France's PSA Group.

The sale of the minority stake underscores the Malaysia's determination to maintain Proton's "national car status," although Geely will have a significant influence over the carmaker's direction, including representation on its management board.

"We understand that Proton is very much loved by Malaysians," said Daniel Donghui Li, Geely's vice president, at a news conference on Wednesday, adding that the Proton badge will be retained.

Malaysia and Southeast Asia are "big potential markets," Li said. Geely plans to increase its annual production to 3 million vehicles by 2020, of which half a million will be made in Malaysia, he said. In 2016, Geely, known in China for its affordable sport utility vehicles, sold more than 760,000 cars.

By securing what it calls a "strategic partner" for Proton, the Malaysian government has pledged to foster the company's growth and look after the welfare of its more than 10,000 employees, many of whom are supporters of the ruling party, the United Malays National Organization.

"As a national car, the government will be here to watch and support the future of Proton in any way we can," said Johari Abdul Ghani, a vice finance minister. The government will also give Proton a 1.1 billion ringgit ($256.2 million) research grant upon the completion of the deal. DRB-Hicom was tasked by the government in April last year with finding a foreign partner capable of turning around loss-making Proton, whose domestic market share has fallen from over 70% in 1993 to 12.5% last year. Among the other conditions for receiving a government loan of 1.5 billion ringgit, Proton is required to start exporting.

Established in 1983 by former Prime Minister Mahathir Mohamad, Proton, with technological assistance from Japan, was meant to drive Malaysia's industrialization, moving the country away from its heavy reliance on agriculture. The indigenous autos were a source of pride to Malaysians, offering them relatively affordable transportation -- helped by hefty tariffs on imported cars. But without the technology to produce its own models, and hampered by perceptions of poor quality, customers came to see Proton mostly as a low-cost brand. 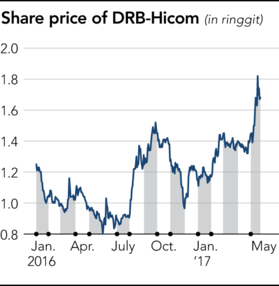 Proton currently operates two underutilized plants with a total capacity of 350,000 cars annually. It will shut the Shah Alam plant under its turnaround plan, and consolidate all production at its Tanjung Malim factory, about two hours' drive from Kuala Lumpur.

The tie-up will give Geely, based in the eastern Chinese city of Hangzhou, the ability to produce right-hand drive vehicles and access to a 3.2 million-vehicle market in Southeast Asia. Geely also owns Swedish luxury car maker Volvo Cars. The Chinese automaker may also manufacture Volvo and other cars under its own brand in Malaysia for sale in the Southeast Asian market.

Geely sold about more than 760,000 cars in 2016, giving it slightly less than 3% of the Chinese market. Although its share remains small, the company is growing fast. Its unit sales jumped about 50% from a year earlier, thanks mainly to its popular low-price SUVs, which go for less than 100,000 yuan ($14,500). Those cars have many fans among young people living outside large cities.

The company's next target is overseas, where it has a lot of room for growth. Exports represent only about 1% of Geely's total sales, at about 10,000 vehicles. The centerpiece in its overseas strategy is Volvo, which it acquired in 2010.

Zhejiang Geely hopes Volvo, which is set to start making cars in India later this year, will drive its overseas expansion with its strong brand recognition. The Chinese company, which remains little known in the global market, has had trouble establishing a name for itself abroad on its own.

Lotus, a sports car-making Proton subsidiary in which Geely will own a majority stake, is expected to give further leverage to Chinese company by adding a new dimension to its product lineup and creating synergies among the three companies. The Geely brand is centered on low-cost SUVs, Volvo offers luxury passenger cars, while Lotus specializes in sports cars. Geely is expected focus on younger drivers with the Lotus brand.

Geely would not have been able to lay its hands on Malaysia's prized national asset in the absence of warmer ties between Beijing and Kuala Lumpur. Malaysian Prime Minister Najib Razak is a strong backer of China's Belt and Road Initiative, calling it a "visionary" plan to boost investment in countries along an ancient trade route.

Najib recently led a delegation of businesspeople to China, signing deals on infrastructure and other projects worth $7.22 billion involving such big Malaysian companies as Sime Darby, MMC Corp and AirAsia, and their Chinese partners.

The agreements followed a mission in November 2016 that saw more than $33 billion in deals, including the purchase of four Chinese-made patrol ships by Malaysia. Najib said these partnerships showed the confidence Chinese investors have in Malaysia.

But Mahathir, who has become a stern critic of Najib in recent years, opposes the sale of Proton to foreigners. "Once Proton is sold to foreigners it will cease to be a national car," Mahathir wrote on his blog in February. "It will just be producing foreign cars in Malaysia."