Although her billionaire father, Cecil Chao, owns the company which she helps to run, being heiress to a property fortune has been no easy ride for the 37-year-old Chao.

In 2005, her father fired her for not showing enough commitment to the business. Then seven years later, having only recently rehired her, Cecil humiliated his daughter by publicly offering a bounty of $65 million to any man who could succeed in wooing her into marriage, an offer that made global headlines. He then doubled the amount 16 months later. Gigi responded with an open letter politely telling him to back off.

Times have changed. Not only does Cecil Chao accept Gigi's sexuality, but the 80-year-old Hong Kong tycoon has selected his daughter ahead of his two sons to succeed him as chairman of Hong Kong-listed real estate developer Cheuk Nang (Holdings). Gigi, who lives openly with her same-sex partner, is juggling her growing corporate responsibilities as Cheuk Nang's executive vice chairman with philanthropic activities and an increasingly high profile role as a leading spokesperson for Asia's lesbian, gay, bisexual and transgender community.

In her business role, Chao helps her father oversee residential real estate projects in China's booming technology hubs of Shenzhen and Hangzhou, the gambling mecca of Macau as well as in Hong Kong and Malaysia. But it is her gay rights activism that has attracted more attention.

In October, the Financial Times in partnership with OUTstanding, a professional network of gay and gay-friendly senior business leaders, ranked her number one in its 2016 list of 100 leading LGBT executives, ahead of those from Google, Facebook and Bank of America. Previous winners of the award have included Antonio Simoes, the chief executive of HSBC Bank, and Inga Beale, who heads Lloyd's of London, the world's largest insurance market. In her acceptance speech for the award, Chao pledged to be "a catalyst for change and voice for the people who want to be heard."

Chao is helping bring changes to a region that lags behind Europe and North America in terms of protection of gay rights and where LGBT role models are rare, especially in business.

Chao, who studied architecture at the University of Manchester, cites supposedly cosmopolitan Hong Kong as an example. According to Chao, 71% of gay people in the territory hide their sexual orientation at work. "It's tragic that people have to live a double life," she told the Nikkei Asian Review at her headquarters that looks over Victoria Harbor. "I have a lot of close friends who find it prohibitively difficult to come out."

That is not the case for Chao. A glamorous figure who in 2013 posed for the cover of Tatler magazine in a daringly low-cut outfit, Chao makes no attempt to disguise her relationship with Sean Eav, the businesswoman she married in a church ceremony in Paris in 2012. "I do think it is important for me to be honest about my sexuality," she said. "I call things as they are."

As committed Christians, Chao and Eav are often seen together attending glittering society functions, worshipping at St John's Anglican Cathedral or leading forays into the city's most deprived neighborhoods on behalf of the Faith in Love Foundation, a charity Chao formed in 2008 to help the poor in a city that has one of the world's widest wealth gaps.

But Chao said the couple does not enjoy equal rights under Hong Kong law, which does not recognize same sex marriages. "We are married in the eyes of God, but not in the eyes of Hong Kong," she said. Because she cannot declare Eav as her spouse on legal documents or even her tax return, it is tantamount to "living a lie," she added.

Chao believes Hong Kong's attitude to gays is even worse than in mainland China. "China is in fact a very open minded society in some ways. But Hong Kong, despite being seemingly cosmopolitan, is still a very conservative place. In the West in the past five years, LGBT acceptance has really taken off and has assumed almost the moral high ground. In Hong Kong, there is still huge resistance."

Mark Peaker, a British-born former banker who now runs Hong Kong's 3812 art gallery, said Chao is helping to change that mindset. "She is sending a very clear message to business and community leaders in Hong Kong," Peaker noted. "Through her business connections, charity work and outreach into the community she is saying that to be gay is to be extremely normal. You can be a taxi driver, a CEO, a pilot, a doctor, you can be anything. With her privileged background, she could quite easily sit around looking beautiful, but she works hard to try to achieve something."

Chao's background may have been privileged, but it was also highly unconventional. Her entrepreneurial father is a self-confessed womanizer who never married but had three children by three different women.

Gigi, the eldest, is the daughter of an actress and singer, Kelly Yao, who came from a poor family. When Gigi was born, her mother still lived with relatives in a tiny subdivided public housing unit in the teeming industrial area of Kwun Tong.

Chao's parents never lived together and today she still vividly recalls being shuttled between Cecil's 1,500-sq. meter waterside mansion, Happy Lodge, where she frolicked with her father in a large pool, and Yao's flat, where seven people were squeezed into 25 sq. meters and four children shared a bunk bed. That experience, she said, helps explain her fixation with Hong Kong's wealth gap and her efforts to help girls from deprived backgrounds gain job opportunities and university educations.

Her religious convictions also reflect her childhood. Her mother is a born-again Christian and an aunt used to take her to Sunday school. In later years, her faith took her to Malawi, where she worked with the Christian charity group, World Vision.

When Chao was six, she moved with her mother to the U.S., where they lived for three years, before Chao's father sent her to boarding school and university in England.

Cecil Chao, who was not available for comment, continues to live an unconventional life. "He's still enjoying being a bachelor and befriending a plethora of girls," Chao said. He is not embarrassed to flaunt his wealth, owning a fleet of Rolls-Royces.

Gigi, meanwhile, lives with Eav and two Yorkshire terriers in relatively modest accommodations, a 110-sq. meter apartment in densely populated Causeway Bay. But like her father, Chao is a passionate aviator and flies a Robinson 44 helicopter around Hong Kong. On the ground, she drives a Tesla electric car -- in part, she says, because she has met and admires company founder Elon Musk. 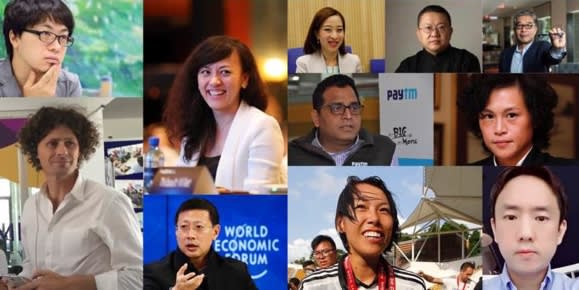