JAKARTA Every night, millions of Indonesians turn on their TVs to watch popular soap operas and music talent shows. At the pinnacle of this lucrative industry is Hary Tanoesoedibjo, a media mogul who has developed ties with U.S. President Donald Trump. But in recent weeks, a potential shakeup in the industry has been causing jitters among investors. MNC's stock price on the Indonesia Stock Exchange has declined 9% so far this year, closing at 1,590 rupiah per share on Feb. 24. Shares of its biggest competitor, Surya Citra Media, have gained 13% over the same period. 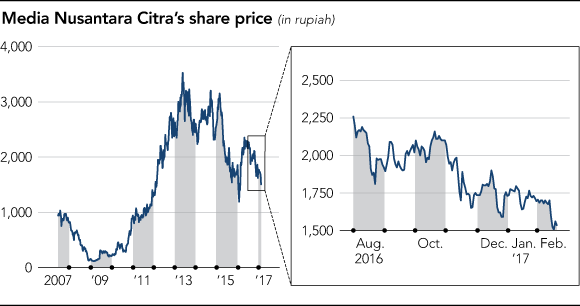 In January, Surya Citra surprised industry observers by announcing the acquisition of an 80% stake in Sinemart Indonesia, an independent production house that specializes in Indonesian soap operas known as sinetron. Established in 2003, Sinemart had been producing exclusively for RCTI, MNC's flagship channel, for more than a decade. Shows like "Anak Jalanan" ("Street Kids") -- a tale of motorcycle gangs that fight for each other's girlfriends -- dominated RCTI's prime time slots.

On Feb. 20, SCTV, one of Surya Citra's two free-to-air TV stations, premiered its first batch of Sinemart-produced sinetron series. The seven-hour blast of non-stop soap operas featured many actors and actresses that previously starred in the popular RCTI dramas. The stars also took part in a marketing campaign on social media with the hashtag #sayadiSCTV ("I am with SCTV") -- a clear attempt to sway viewers from RCTI. 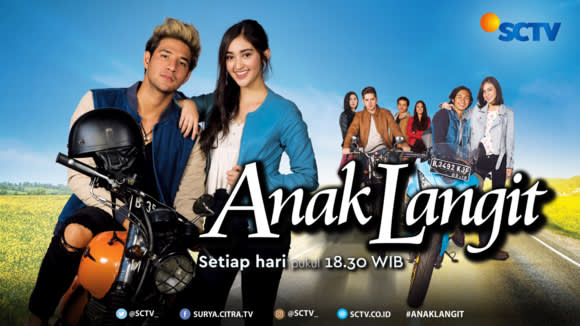 Surya Citra Media is hoping to boost ratings with Indonesian soap operas such as "Anak Langit" ("Children of the Sky"), which debuted on Feb. 20. (Courtesy of Surya Citra Media)

Surya Citra is owned by Eddy Sariaatmadja, who started out selling computers in the 1980s. Like Tanoesoedibjo, he saw an opportunity in television after the fall of the Suharto regime in 1998. Surya Citra acquired SCTV in 2002 and expanded by merging with another network, Indosiar, in 2013.

RATINGS REVAMP Unlike Tanoesoedibjo, who ran for vice-president in 2014 and has expressed interest in running for president in 2019, Sariaatmadja is known for staying away from politics. The acquisition of Sinemart is seen as a way to revamp SCTV's ratings after a dismal performance in 2016, which ended with an audience share that averaged 12% in December. Sinemart "can upgrade the content quality of our TV shows," the company said.

Analysts have pegged Sinemart's value at 500 billion rupiah ($37.5 million), with another 500 billion rupiah to be paid if Sinemart's sinetron boost SCTV's popularity. So far, it looks like a pay day is coming. SCTV's prime time audience share averaged 11.4% in January. But on Feb. 20, it surged to 31.5%, according to Nielsen. "Note that this is just day one," said Henry Wibowo, an analyst at local brokerage Bahana Securities. "Nevertheless, it is safe to say that SCTV hit the jackpot on its first day." 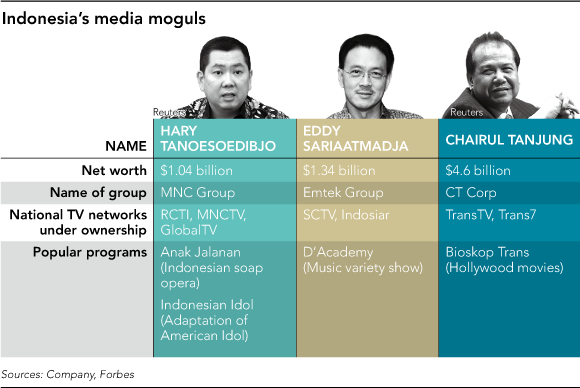 Sinetron can attract the biggest budgets from advertisers because of their broad reach. "It is the only category that can attract maids and drivers as well as the wives of ministers," said Wibowo. Consumer goods giants like Unilever and Hanjaya Mandala Sampoerna, a unit of U.S. tobacco maker Philip Morris, smartphone brands, and well-funded e-commerce companies line up to place ads during commercial breaks or within the programs.

MNC is not resting on its laurels. The company has been beefing up its production arm, MNC Pictures, which recently replaced the Sinemart soap operas. The company has completed a 110,000-sq.-meter studio complex in Jakarta that houses all three of its networks. It comes equipped with 10 studios -- doubling the total number under the group to 20. 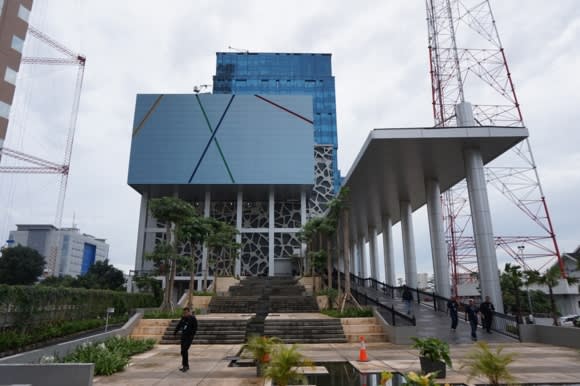 The studios are aimed at boosting MNC's lineup of variety shows -- another popular category -- with an eye on broadening its audience base. "Apa Aja Dicandain" ("Making Fun of Everything"), which debuted in February for GlobalTV, mixes comedy with news and interviews, similar to Saturday late-night shows in the U.S. "The concept is to make things easier to understand and appeal to a wider audience," said Anissa Tisnadisastra, the show's Indonesian producer. Having production on the same premises will also help the three networks operate more efficiently, by integrating the studio booking process, for example.

CASH COW The stakes are high. Advertising makes up nearly all of MNC's revenue and profits. A slip in ratings could be a major setback not only for the company, but also for Tanoesoedibjo's ambitions for diversifying his conglomerate. Over the years, MNC has served as a cash cow that fueled his expansion into the finance and property sectors.

In September, Tanoesoedibjo stepped down as CEO of MNC, a move that signaled a shift toward developing new businesses. His ambitious agenda includes developing a "six-star" hotel with the family business of U.S. President Trump, a theme park and an F1 racing track. Over the long term, he hopes the group will have three pillars -- media, finance and property. The transition will not be easy. MNC has been recovering after being hit by the weak economy and a decline in the rupiah that triggered foreign exchange losses. In the first nine months of 2016, it reported revenue of 5.26 trillion rupiah, a 5% increase from a year earlier. Net profit more than doubled to 1.44 trillion rupiah, giving the company a net profit margin of 27% -- making it a highly lucrative business that would be hard to replace. Advertising-based media accounted for nearly 70% of the gross profit of Tanoesoedibjo's holding company MNC Investama.

This is partly due to Indonesia's fragmented media industry. The government caps the number of free-to-air TV stations at 11, 10 of which are private, which limits new entries to regional and pay-TV stations. Other forms of media cannot match the reach of TV. At least 60% of households are estimated to have a TV, compared to around a third with internet access, and penetration for print publications is even lower. Media Partners Asia, a media consultancy, estimates that more than 60% of advertising spending goes to free-to-air broadcasters.

Tanoesoedibjo also has been busy promoting his Indonesia Unity Party across the archipelago, with an eye on the 2019 presidential election. Other rivals are pouncing on the opportunity to drag down MNC. MD Entertainment, a production house that has made hit movies, recently struck a deal to produce sinetron exclusively for a network owned by billionaire tycoon Chairul Tanjung. His conglomerate is also expanding aggressively on pay-TV channels, launching the local version of CNN in 2015. Meanwhile, ANTV, controlled by the Bakrie family, has gained popularity by airing Indian and Turkish soap operas.

In addition to monthly ratings, analysts are watching to see whether Tanoesoedibjo can leverage ties with Trump to boost his international profile and bring in new investors. During his trip to the U.S. in January to attend Trump's inauguration, Tanoesoedibjo posted a photo of himself and Walt Disney CEO Robert Iger on his social media accounts. A big-name partner could blow away fears of losing out to rivals -- and begin another chapter in the drama. Without sustaining the growth of MNC, his cash cow and source of power, he may spoil a happy ending.