TOKYO -- Japan's globally operating companies are tightening supervision of the risk management of their overseas subsidiaries as they face unexpected legal and regulatory issues in other countries.

Toymaker Tomy has some lessons to offer concerning risk management in overseas operations. The company paid dearly for not being aware of a minor business rule concerning faxing in the U.S. 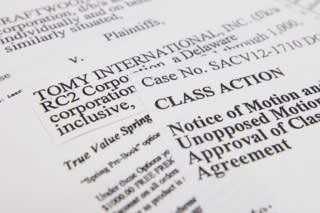 Japanese toymaker Tomy faced a costly class-action lawsuit in the U.S. over a single fax with a regulatory lapse.

Its U.S. unit sent a fax to toy retailers telling them that they would receive a discount if they bought display shelves in bulk through an advance order.

The Junk Fax Prevention Act of 2005 requires that businesses and individuals include an opt-out notice in the cover sheet or the first page of the faxes they send so that the recipients can stop receiving unwanted faxes.

Tomy's U.S. unit was not aware of the rule and sent the faxes without an opt-out notice.

In 2012, a class-action lawsuit was filed against Tomy over this violation.

The offense can be punished with a minimum fine of $500 per violation. The company suddenly faced the possibility of having to pay a huge amount of damages, as in the past it may have sent such faxes about 400,000 times in the U.S.

In August last year, Tomy decided to pay more than $10 million to settle the lawsuit.

Tomy has also been hit by revelations about inappropriate accounting practices at a Japanese subsidiary.

In response to the fax debacle, Tomy has introduced a double-checking system for audits of its U.S. unit.

The toymaker has also designated March 4 as the day for thinking about legal compliance to ensure that all employees are keenly aware of the importance of abiding by the law.

As an approach to dealing with risks their overseas units face, Japanese companies have been putting local employees in key management positions.

But simply hiring local people is not enough to cope with the wide rage of risks involved in overseas operations.

Fujikura, an electric equipment manufacturer, is racing to check the contracts concluded between its Chinese subsidiary and its business partners. The company is examining the document for questionable transactions.

In March last year, a Chinese marketing executive working for Fujikura's Chinese unit was arrested on suspicion of bribing a business partner after an investigation by prosecutors.

To win a contract from an automaker, the executive paid fees to a consulting company in a way that the money found its way into the pocket of a purchasing manager at the carmaker.

Fujikura's headquarters in Tokyo said it was not aware of what the local executive was up to.

In China, the concept of bribery is broader than that in Japan. Giving cash or goods to private-sector companies for business gain can be punished as bribery. There has been a case in which a gift of just three bottles of drinking water and a bottle of cola was considered a form of bribery.

A company, for instance, can violate the law by offering a bounty to an employee at a sales agent who has sold its products, according to a lawyer.

Japanese companies are under growing pressure to enhance their monitoring of the behavior of their overseas subsidiaries from the viewpoint of legal compliance.

Hitachi has traditionally been promoting independent management of its overseas units led by local executives. But the electric equipment giant has changed its policy concerning the area of international tax administration.

Hitachi has embarked on establishing a system for integrated management of the taxation risks for its nearly 1,000 consolidated subsidiaries.

Hitachi will spend about a year inspecting the information for any problems with tax management for their business transactions involving a wide range of products, from household electric appliances to turbines for power generation.

In response to changes in international taxation rules, Hitachi is making the efforts to reduce the risk of being forced to pay punitive taxes in foreign countries where it is operating.

"Parent companies should realize that they need to serve as the global compliance headquarters for the entire group and make sure that its management policy will be fully understood by all members of the group through constant dialogue," said Shin Tanaka, president of FleishmanHillard in Japan, a consulting company well-versed in corporate risk management issues.

Japanese companies rushed to expand their overseas operations during the recent years when the yen was extremely strong. But they didn't pay sufficient attention to the importance of sorting out all legal and other regulatory issues concerning their relations with overseas subsidiaries.

They need to understand that just leaving their units to deal with such matters entails huge potential risks.