If you live in Jakarta, you can do all these things with one smartphone app.

Go-Jek started off as a motorcycle taxi service (known locally as ojek) aimed at making it easier to navigate the Indonesian capital's notorious traffic. It has since morphed into an all-in-one platform with more than a dozen functions. The app has become an essential tool for digital-savvy millennials living in Indonesia's cities.

Less than two years after launching its smartphone app, Go-Jek has racked up nearly 30 million downloads, which translates to about one in three smartphone users in the country. In July, Go-Jek told Tech in Asia, an events and media company, that it handled 20 million total bookings in June alone, or about eight per second.

Customer orders are fulfilled by some 250,000 registered drivers -- more than the number of taxi drivers in the country -- with the help of 35,000 food merchants, thousands of masseurs, home cleaners, makeup assistants and auto mechanics. The app's most popular feature remains Go-Ride, the motorbike taxi service. Type in your destination, select the payment option, hit "order" and you soon get a phone call from a driver asking for your exact location and the color of your clothes.

Drivers usually arrive within a few minutes, wearing the company's trademark green helmet and jacket. Those worried about hygiene can ask for a mask and shower cap before strapping on a helmet and hopping on the back. After you arrive, you can rate the driver with one to five stars and even give a tip.

Ojek drivers have been around for decades because motorbikes, which can squeeze through Jakarta's clogged streets, are often the fastest way to get around.

But because the industry was unregulated, many people were reluctant to use them, put off by having to haggle over fares with drivers and walk around in the scorching sun to find one. Drivers, for their part, often wasted time waiting for customers and were often seen napping on their motorbikes.

All in the timing

Go-Jek Indonesia founder and CEO Nadiem Makarim, who sketched out his ideas for the company in 2011 while studying at Harvard Business School, was a frequent ojek user himself when he worked as a consultant in Jakarta. He started Go-Jek as a call-center operation, relying on word of mouth to popularize the service. 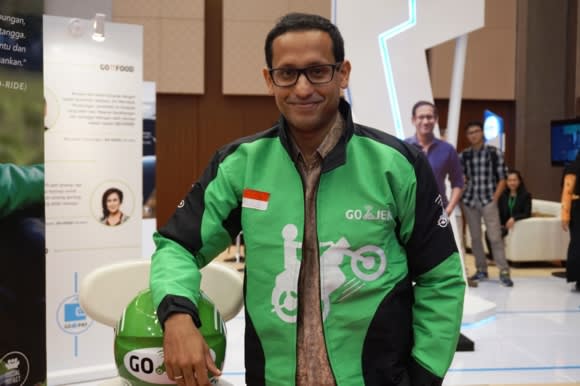 "I quickly realized that ojeks were a highly undervalued asset," he told the Nikkei Asian Review in June 2015. "There was a huge market inefficiency ... whereby they could do so much more but there wasn't a level of trust and there was no supporting technology." His solution was an app connecting users and drivers through mobile phones.

Go-Jek succeeded, Makarim said, also because it was "the right product at the right time."

In the years that followed, the spread of smartphones brought millions of Indonesian millennials online for the first time. That caught the eye of venture capitalists who, seeing the soaring valuation of Uber in the U.S. and its competitors, believed the ride-hailing market in Indonesia was ripe for the taking.

It was only in 2014, after he got funding from NSI Ventures, the venture-capital arm of Southeast Asia-focused private equity company Northstar Group, that Makarim became a full-time CEO.

By the time Go-Jek launched its smartphone app in January 2015, overseas tech companies such as Uber and Grab already had car-based ride-hailing services in Indonesia. But Makarim was the first to unlock the true potential of ojek drivers.

Their ability to navigate traffic, low labor costs and the light regulation they face made them ideal for unblocking all kinds of logistic bottlenecks for consumers and businesses.

Diversifying into retail and e-commerce was not a part of Makarim's original plan. "We kind of stumbled onto it," he said. But he was quick to adapt, based on his experience launching a local operation for German tech company Rocket Internet, which is known for rapidly cloning successful business models.

The company was expanding so rapidly that it began running into back-end problems. Some drivers gamed the system -- using two phones to send fake orders from one to the other. But rather than slow down, Go-Jek snapped up two software companies in India to broaden its pool of engineers.

To stay ahead of Uber and Grab, which had doubled down on Indonesia by launching their own motorbike hailing services, Go-Jek had to move quickly. In August 2016, the company announced that it had raised $550 million, the largest amount ever for an Indonesian startup, from investors including U.S. private equity companies KKR and Warburg Pincus. "[We] look forward to continuing to attract world-class talent to one of the world's most dynamic tech companies, " Terence Lee, a director at KKR Asia, said in a press release.

Go-Jek is now working on getting around another obstacle: payment. It revamped its in-app payment service, Go-Pay, in April, and more recently enabled users without a bank account to top up their balance by handing cash to drivers.

In a country where 99% of transactions are in cash, "do we wait until everyone walks through a bank branch?" Makarim asked an audience at a conference in August. "We need to move the next 100 million Indonesians into the world of transactions."

Some compare Go-Jek with WeChat, a wildly popular Chinese app that serves as a gateway for booking taxis, ordering food and managing money for its 800 million-plus monthly active users. Makarim shrugs off the comparison. "We own all the verticals. WeChat works with third parties," he told reporters in August. "There is no other Go-Jek in the world.