SILICON VALLEY -- Hewlett-Packard is making a high-stakes re-entry into the sizzling global market for smart mobile devices with a pair of "phablets" to be rolled out in India in February. 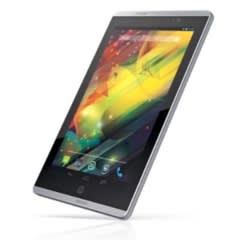 HP will launch this "phablet," or tablet-smartphone hybrid, in India in February.

Its comeback strategy centers around two tablet-smartphone hybrids -- the HP Slate6, with a 6-inch screen, and the Slate7, with a 7-inch screen. They are branded as the VoiceTab, which is meant to convey their role as tablets that double as phones.

The devices' specifications are modest compared with those of cutting-edge smartphones sold in industrial countries. For example, they are not ready for LTE, or Long-Term Evolution, a standard for high-speed wireless communication; they only support third generation wireless services. The pared-down specs reflect HP's efforts to keep costs lower in India, where the most popular smartphones are those priced around 10,000 rupees ($176).

Despite its troubled history in the mobile device market, HP has decided to give it another try. The rapidly growing global smartphone market is too attractive to ignore, and the company wants a sizable chunk of it. In 2013, more than 1 billion smartphones were sold worldwide, nearly three times more than personal computer sales.

However, HP is still reeling from its failed attempts to enter the smartphone market with the $1.2 billion acquisition in 2010 of Palm, the one-time king of personal digital assistants.

Then HP CEO Mark Hurd intended to use webOS, a Linux-based mobile operating system developed by Palm, to boost the company's presence in the smartphone market, but he resigned suddenly in August 2010 soon after the acquisition was formally completed.

Leo Apotheker, a former co-CEO of Germany's SAP and who succeeded Hurd as HP's chief, adopted a streamlining strategy to focus the company's operations on products for industrial use. As part of this drive, he decided to discontinue the webOS device business and work toward divesting the PC division. But Apotheker was forced to step down after less than a year to take responsibility for the firm's poor earnings.

Current HP CEO Meg Whitman, who took over in September 2011, promised as far back as September 2012 that the company would re-enter the smartphone market. At the time, she said HP will "have to ultimately offer a smartphone, because in many countries in the world that is your first computing device."

But after four years of being out of the game, HP has a lot of catching up to do.