Hailing an Uber in Japan means hailing a taxi

Service provider trying to convince the nation's regulators to ease up A taxi parked in front of Tokyo station. Japan has been slow to embrace the likes of Uber.
KOSUKE SHIMIZU, Nikkei staff writerDecember 3, 2017 14:04 JST | Japan
CopyCopied

TOKYO -- Uber Technologies is at a turning point in Japan. Hobbled by regulations and backlash from cabbies, the ride-sharing app provider is operating as a "taxi hailing" service while continuing talks with regulators.

At a news conference on Nov. 27, Brooks Entwistle, Uber's chief business officer for the Asia Pacific region, said the company will prioritize partnerships with taxi operators in Japan. 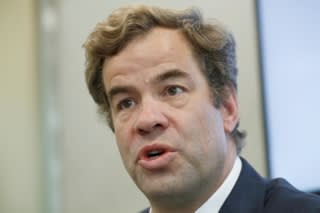 Uber has not given up its hopes of running a ride-sharing service in Japan. But Entwistle said some markets are slow-moving and that the company is focusing on talking with Japanese regulators.

At home, the American company has been under fire over a customer data breach and the founder being accused of sexual harassment. In Japan, Masami Takahashi, president of Uber's Tokyo-based unit, recently reported to step down. Entwistle told the press gathering that he is looking for a replacement as well as for candidates to fill other posts.

Uber has been expanding its business. But given a number of obstacles -- including the founder's resignation and overseas governments being averse to ride-sharing -- the company thought teaming up with taxi companies would be a better way to grow in Japan.

Across Asia, Uber has been joining hands with taxi fleets. Yet its situation in Japan is unique. Though the Japanese government has begun discussing the lifting of a ban on ride-sharing, no concrete plans have been made. The transport ministry, meanwhile, remains cautious, citing safety concerns.

So Uber has no choice but to team up with taxis.

The logo of Uber is seen on a screen.   © Reuters

In Singapore, the company successfully lobbied for deregulation, which led to a program allowing individual drivers to carry passengers for a charge, among other changes.

Japanese taxi companies are also seeking to cooperate with Uber. But "the fees [for a tie-up] are too high for small and midsize operators," a representative of a major taxi operator said. Thus, Uber taxis and "hires" -- as chauffeured vehicles are called in Japan -- are concentrated in Tokyo and not spreading to other parts of the country.

By contrast, Airbnb is succeeding in cracking the Japanese market. The home-sharing service provider entered Japan in 2014 -- the same year Uber started hire service in Tokyo. Today, Airbnb's website lists 56,000 rooms in Japan that are used by some 5 million guests every year. Airbnb in 2016 had a 920 billion yen ($8.25 billion) economic effect on Japan, up 80% from a year earlier, according to the company.

In Japan, selling short-term stays in private rooms without a hotel license is illegal. The same is true for individual drivers getting paid to ferry riders around without a taxi license. Airbnb was able to successfully prompt discussions on relaxing regulations partly due to the expected shortage of hotels in 2020, when Tokyo hosts the Olympics.

But the need for rides in Japan is not as strong as the demand for places to stay the night. In a nutshell, this explains why Uber finds itself on a different road in Japan than its San Francisco neighbor.