TOKYO -- Japan is seeing a surge in visitors from predominately Muslim countries in Southeast Asia, for business as well as tourism. The trend is widening a niche in the Japanese culinary market: food prepared in accordance with Islamic law. 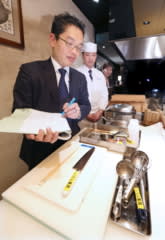 Arriving at Ukihashi before opening time, Hassan headed for the kitchen. He asked some questions: Is there a separate washing place for plates and utensils reserved for halal dishes? Is the restaurant's soy sauce alcohol-free? He also watched how the staff prepared meals, and peeked in the refrigerator to make sure all ingredients for halal cooking were separate from other foods. It took more than an hour to complete the evaluation.

The entire process of gaining certification takes about a month and costs several tens of thousands of yen.

Hassan explained that the certification his company offers is something called "local halal," which takes local conditions into consideration. He said it would be very difficult to fully comply with Islamic law in Japan, which has only a small Muslim population. Different groups also have different standards for what is acceptable. But even this local certification can make a big difference for the growing number of Muslims setting foot on Japan's shores.

Estimates made in 2012 by the Japan Halal Association showed that 185,000 Muslims lived in Japan, while 280,000 Muslims visited the country.

In 2013, Japan National Tourism Organization data shows the number of visitors from Malaysia soared 35.6% on the year to 176,500, while the figure for Indonesians rose 34.8% to 136,800. Both countries have Muslim majorities. Japan's overall tally of foreign arrivals surpassed 10 million for the first time.

Early last month, a group of 16 foreign visitors dined on Japanese fare at a restaurant called Hanasaka Jisan in Tokyo's Shibuya district. Half of the guests were Muslim. Dishes included tempura, tamagoyaki (fried egg) and shabu-shabu (sliced beef dipped into boiling water); all were halal-certified.

The group was in Japan to learn about petroleum-related technology. The dinner party was arranged by the Japanese host company. The Muslim guests clearly appreciated the opportunity to sample local cuisine.

"Since I arrived in Japan, I have eaten only foods I know for sure are halal, such as vegetables and fruits," said an engineer from Qatar. "I'm glad I have had the chance to enjoy halal-certified Japanese foods."

The host company had learned from past experiences with Muslim guests. Simply avoiding pork and alcohol -- both banned by Islamic law -- is not enough. "We explained to them that the dishes we were serving did not contain (those ingredients), but without halal certification, many would not touch the food," a company official recalled.

The Hanasaka Jisan restaurant, which is part of a chain, appears to have made a smart move by going halal. The Shibuya location now serves an average of 100 halal dishes a month, up 20% on the year, according to a restaurant representative. 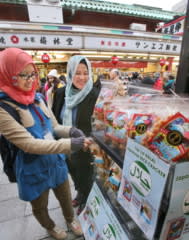 Japan Aselal Shoji, another company in Tokyo, has found its own way to help companies cater to their Muslim visitors.

Last year, Japan Aselal Shoji started delivering halal bento, a box lunch, in the capital. The food is prepared by halal-certified restaurants; the boxes go for 1,000 yen ($9.85) each. The menu includes beef on rice, made with Japanese meat; nasi goreng, or Indonesian fried rice; and various Malaysian dishes.

The company said it receives about 500 orders a month from major companies and government agencies.

"Opportunities to do business with Islamic countries have increased," said Hiroki Chiba, Japan Aselal Shoji's president. "But many companies here are having a hard time, since there aren't many restaurants that serve halal food."

The brisk inspection requests at Malaysia Halal suggest that could soon change.