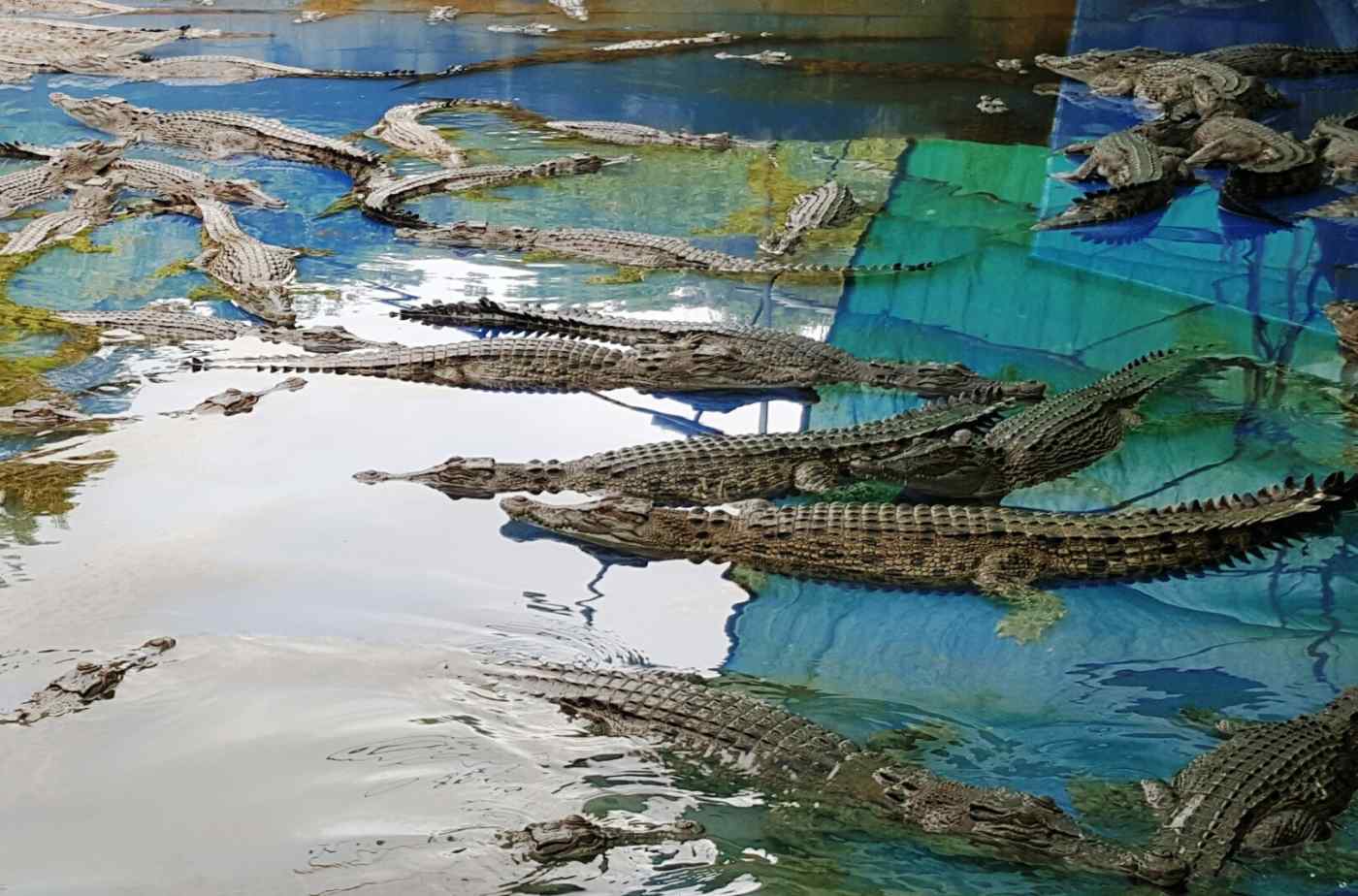 CAIRNS, Australia -- A crocodile's long journey from prehistoric killing machine to a $50,000 luxury handbag often begins in a tranquil lagoon about 40km north of Cairns in Australia's tropical north.

Here, in a combination tourist attraction and crocodile farm, 10 male and 17 female specimens of the estuarine crocodylus porosus, more commonly known as the Australian saltwater crocodile, glide silently through the lagoon's still waters. They are the nucleus breeding stock for a crocodile hatching and raising business than produces up to 1,000 skins a year - skins of matchless quality and desirability that are in hot demand from global fashion houses.

Australian crocodiles are cranky creatures to wrangle. "They come out of the egg ready to bite," declares Angela Freeman, who with her husband Peter owns and operates Hartley's Crocodile Adventures at Wangetti on the Captain Cook Highway. But the upside is that the skin of the Australian porosus is "the best of the best," in her view. "It has a magnificent scale pattern," she says. 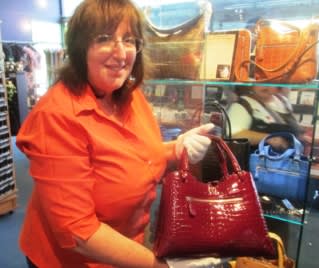 Hartley's Crocodile Adventures owner Angela Freeman shows one of the crocodile skin handbags for sale at her farm. (Photo by Geoff Hiscock)

Provided they are flawless, with no nicks, stretch marks, black spots or bite marks, two skins will go into the making of something like the stratospherically-priced Birkin crocodile handbag produced by the French luxury goods maker Hermes. Because of their perceived status and scarcity -- a customer might have to wait two or three years to buy a new one -- even a used Birkin is in high demand, along with its Louis Vuitton and Chanel equivalents.

A 35cm Birkin porosus crocodile handbag made in 2008 in the color Braise (a red variant), and finished with 18-karat white gold encrusted with 10 carats of diamonds, sold for a record $298,000 in the United States in April this year through the private resale site Prive Porter. The record at auction was set in June 2015 in Hong Kong when a 35cm fuchsia pink 2014 Birkin went under the hammer at Christie's for 1.72 million Hong Kong dollars, or about $222,000.

"I can understand the price," Freeman said. "A crocodile skin handbag is a product that will live beyond the life of its owner. For the discerning buyer, it is an investment, or something that can be passed down through the generations."

She says that classic handbag styles from the 1930s to 1950s are just as fashionable today as they were 80 years ago. "It's just the same as a collectable Chanel or Louis Vuitton outfit. An antique accessory like a crocodile handbag will always be desirable. A bag can last 100 years if it has good fittings and is well maintained."

From hatchling to handbag is about a three-year process, with many a slip along the way as the crocodiles mature to about two meters long, the optimum size for a usable skin. Part of the production problem, according to Freeman, is that the big Australian "salties," as they are known locally, have a bad attitude compared to their global cousins in Africa, India and America. "In Africa, crocodiles can be handled -- they are a lot more tolerant. But these ... they are cranky, snappy, aggro creatures," she said as we sat on a wooden deck that extended over the lagoon. In the water below, the crocodiles were stirring. "They can hear my voice," she noted, "so they think there's some food around."

From the age of about two years onward, Australian crocodiles are so intolerant of rivals that they often need to be raised separately, Freeman added. "Their way of communicating is to bash heads to say 'get out of my way.' After that, they just bite." 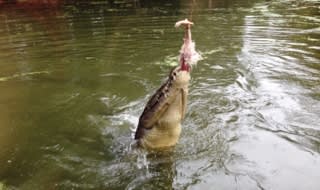 An estuarine crocodile lunges for a chicken in the lagoon at Hartley's crocodile farm. (Photo by Geoff Hiscock)

And what a bite it is. A mature breeding-stock male crocodile, perhaps 4 meters long and weighing 300 kg, exerts massive pressure when its jaws snap shut, crushing the skull, body or limbs of any hapless animal that happens to get in its way. Because of its perceived threat to humans and livestock, the Australian saltwater crocodile was hunted almost to extinction until 1974, when the federal government ordered a complete ban on killing in the wild of the saltwater crocodile and the smaller freshwater version. Now, there are an estimated 200,000 wild crocodiles across Australia's northern tropics.

Despite their aggression, Freeman said she likes crocodiles and is happy to put money back into conservation efforts. "We are doing an environmentally sustainable form of agriculture here, in the right environment. If you look at cattle, they use a lot of water and they are responsible for a lot of erosion through overgrazing in the past."

The Freemans have been running Hartley's for about 30 years in its various iterations, including funding a massive upgrade and relocation in 2002 from its original site 500 meters north at Hartley's Creek. Theirs is one of about 14 crocodile farms in Australia. Many of those farms have been acquired in recent years by fashion houses such as Hermes and LVMH (Louis Vuitton), keen to control their supply chains as they battle for a share of the lucrative global luxury goods market. The sector, which is worth billions of dollars, encompasses leathergoods as well as items such as Tiffany diamonds, Rolex watches, Chanel fragrances and Dior dresses. 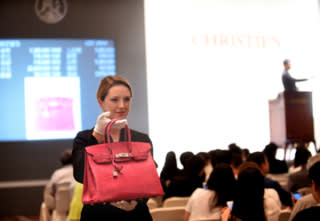 Hermes, LVMH and Kering (which owns brands such as Gucci and Balenciaga) all declined to discuss their Australian operations with the Nikkei Asian Review.

"The major players want vertical integration. I totally get that -- I'm a manufacturer myself," Freeman said. "They know what they need, so in Australia they made a decision to take over various farms."

Freeman noted that her company would remain independent (she has a Japanese partner with a minor share), balancing its operations between tourism and farming. The business serves the high-end European market and occasionally Japan, as well as keeping some skins for Freeman's own handbag making operation.

There are between 3,500 and 4,000 crocodiles at Hartley's at any one time, spread across breeding, transition and tourism stock. "We are happy at this level," Freeman said. "We don't need a large number of animals because we focus on quality. We produce and process what we raise, which is 900 to 1,000 a year."

Egg laying takes place from late October through to December, with an incubation period of about 90 days. After hatching, the baby crocodiles go into tubs in a heated sealed shed, in egg clutches of 30 to 45.

"From then on, it's a hatchling by hatchling scenario," explained Freeman. "I liken it to wagyu beef, where there is a lot of attention to individual animals in their care and feeding." In the tubs, they get a special food mix that includes lean kangaroo meat and chicken, with no hormones, no chemicals and no antibiotics. 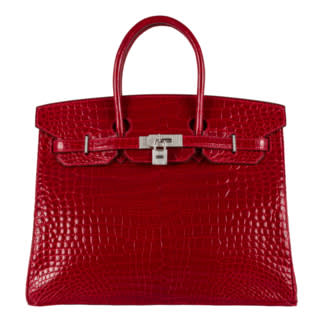 The crocodiles will spend 12 months in the tubs until they are about 60 cm long, then move into larger tubs for another year or so. There might be 30 together in a larger tub, depending on the clutch. "Too few and they might feel insecure, or one will dominate, so it requires careful calculation on our part," Freeman explained.

For the "finishing" stage of three to six months before the two-meter crocodiles are killed and skinned, Hartley's is working on individual tubs that allow careful management. The aim is to have animals with smooth bellies that are nick free, with no bites or blemishes. The lean crocodile meat goes to gourmet butchers. The skins are salted to draw out moisture and stored in a coolroom to await grading over a light table by a skilled grader from Europe or Japan, before being shipped overseas for the four-month tanning process. A single blemish might see the value of a skin marked down 25% from the top price of about 950 to 1,000 Australian dollars ($680-720).

According to Freeman, the best tanning is done in France, Italy, Spain, Japan, Singapore and the U.S., with China and South Korea on the next rung below. After tanning, it might take skilled artisans in a fashion house another two years to create the finished product. Artisans train for 10 years on various leathers before they are allowed to work on crocodile skins, which helps explain the enormous prices some of these bags command.

As for that all important Birkin name, it comes from the British singer-actor Jane Birkin, who sketched out her ideal handbag needs while on a flight in 1981 seated next to the Hermes then-chief executive Jean-Louis Dumas. He created a black leather bag for her a few years later. There was a commotion mid-last year when animal rights organization People for the Ethical Treatment of Animals, or PETA, alleged Hermes was buying crocodile skins that had been "cruelly slaughtered," prompting Birkin to briefly withdraw use of her name. But on Sept. 11, 2015, Hermes issued a statement that Birkin was "satisfied with the measures" that the company had taken over the treatment of crocodiles at its partner farms. The Birkin bag lives on.