One of Fujifilm's advantages is that it produces its own software, while other medical equipment makers often outsource the work. (Source photos by Tomoki Mera and courtesy of Fujifilm)
YUKINORI HANADA, Nikkei staff writerJanuary 3, 2021 05:07 JST | Japan
CopyCopied

TOKYO -- Japan's Fujifilm is poised to deliver a near record profit in the pandemic year ending this March. To understand why, take a trip to Denmark.

In the town of Hillerod, near Copenhagen, a Fujifilm subsidiary is upgrading its factory at a cost of 100 billion yen ($968 million) to develop and manufacture pharmaceuticals.

The project, being managed by engineers from Japan, is one part of Fujifilm's acquisition-fueled drive to become the top Japanese medical devices maker.

The group's medical business -- which enjoyed the spotlight last year for its production of flu treatment Avigan and as part of the supply chain for a U.S.-developed coronavirus vaccine candidate -- has become a powerhouse for earnings, offsetting declines in sales of office equipment and cameras.

Paving Fujifilm's inroads into pharmaceuticals is its emphasis on precision engineering, a legacy of the days when the company prided itself on making photographic film to capture life events like marriages and graduations.

One new area where it has projected this technological background is antibody drugs. While antibodies generated by the human immune system offer natural protection from bacteria and viruses, antibody drugs are lab-made immunizers.

Designed to specifically target cancer cells and other causal agents, the drugs are said to cause fewer adverse effects than conventional small molecule drugs. But antibody drugs are manufactured by cultivating cells, making production difficult and costly. 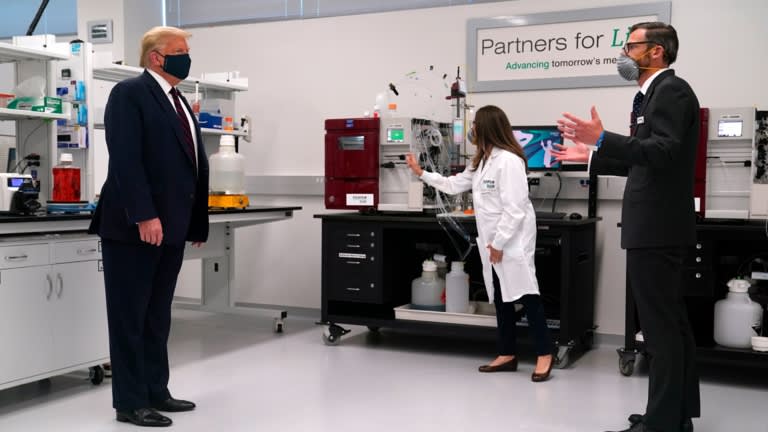 In 2011, Fujifilm acquired a contract development and manufacturing organization, or CDMO, for biological pharmaceuticals from U.S. drugmaker Merck after determining that its film-making technology could apply to the production of pharmaceuticals.

Fujifilm then sent engineers to Merck plants in the U.S. and Britain to oversee production. They began a drastic overhaul. When the temperature in a culture tank dropped, for example, they worked with employees to solve the underlying problem instead of simply raising the temperature -- the usual quick fix.

Production gradually began to stabilize, with the success rate now topping 95%, up from 70% at the time of acquisition. "The rate is higher than those of our rivals," said Takatoshi Ishikawa, a Fujifilm director.

Fujifilm bought the plant in Denmark from American biotech company Biogen for 94 billion yen in August 2019. The plant will double its culturing capacity when the facility upgrades are completed. "We are receiving many inquiries from pharmaceutical companies, and the expanded capacity is starting to be filled with orders," Ishikawa said.

The strengths of the bio-CDMO operation have become evident as the pandemic rages on. Fujifilm has agreed to handle production on behalf of a drug development project co-sponsored by the Bill & Melinda Gates Foundation, which was formed by Microsoft founder Bill Gates and his wife Melinda. Under the agreement, Fujifilm plans to produce ingredients for U.S. pharmaceutical Eli Lilly's COVID-19 treatment starting in April.

Fujifilm is estimated to have spent nearly 300 billion yen on acquiring bio-CDMO acquisitions and related capital investments. In the year ending March 2021, the segment is expected to bring in 100 billion yen in sales and capture a global market share of over 10%. This would make it second only to market leader Lonza of Switzerland.

Fujifilm had set a sales target of 100 billion yen for its bio-CDMO business for fiscal 2021, but is likely to exceed it a year ahead of time.

The company has a long history in medical products, starting with X-ray film production in 1936, two years after the company was founded. It developed an endoscope based on its optical technology in 1971 and diversified into X-ray equipment and image information systems for medical use.

In the decade from 2000, Fujifilm was hit hard by shrinking demand for photographic film, which peaked near the turn of the century due to the widespread use of digital cameras. This forced the company to de-emphasize its film business in favor of medical- and liquid crystal-related equipment, business machines and other operations.

For medical equipment, Fujifilm launched an aggressive merger and acquisition strategy under the leadership of Chairman Shigetaka Komori, who stressed that "we can help people because there remain many unsolved problems" in the medical field.

Fujifilm jumped into the pharmaceutical market in 2008 after acquiring a 66% stake in Toyama Chemical for 137 billion yen. It then bought Japan Tissue Engineering in 2014 and Cellular Dynamics International, an American startup for production of induced pluripotent stem cells, or iPS cells, in 2015 as it looked to enter the market for regenerative medicine.

The company also reinforced its test agents and other drugs through the 155 billion yen purchase of Wako Pure Chemical Industries from Takeda Pharmaceutical in 2017.

Production for many of the company's medical products is based on its film production technologies, which include chemical synthesis and nanotechnology for using collagens that contain light-sensitive and color-making particles.

In addition, the company has gained know-how in machine and system design through decades spent making cameras, and holds a similar trove of image analysis technology.

Chemical synthesis is used to develop new drugs and test agents, while collagen technology serves to make scaffolding for breeding cells for regenerative medicine. Nanotechnology is effective in developing liposomes, or minute capsules that wrap drugs and carry them into targeted tissues.

Another Fujifilm advantage is that it produces its own software, while other medical equipment makers often outsource this work. "We are in an advantageous position because we handle both equipment and information technology," said Teiichi Goto, a Fujifilm director.

"The companies we have acquired are all growing," said Komori. In addition to reviewing companies recommended for acquisitions by financial institutions, Fujifilm looks for takeover targets on its own.

When the coronavirus pandemic emerged last spring, Komori told Fujifilm employees that "it's time to harvest the fruits of the our business shift."

The anti-influenza drug Avigan from Fujifilm Toyama Chemical was hailed as a potential treatment for COVID-19, but is still awaiting government approval. Preparing for a production increase, the parent company has gathered 20 to 30 workers from group companies to secure materials and facilities for raising output. Group companies have been so busy dealing with external orders that they had to turn down some requests from the parent, prompting Sukeno to step in and ask for more cooperation.

Fujifilm has developed a reagent for pathological complete tests and has also increased the production of mobile X-ray equipment and antiseptics. The company also plans to apply early next year for government approval for its system to support the diagnosis of coronavirus-induced pneumonia through AI-based analysis of computed tomographic images. 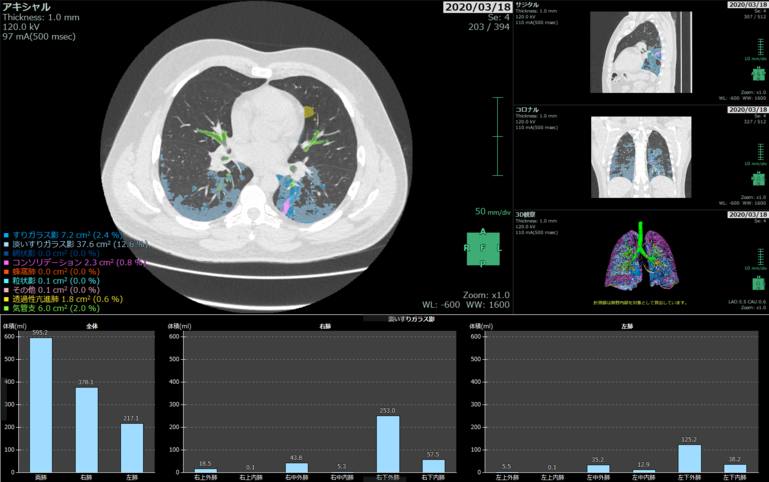 Fujifilm is developing a system that quantifies the pneumonia caused by the new coronavirus using scanned images. (Photo courtesy of Fujifilm)

The profit projection is impressive, considering that Canon, Ricoh and other rival precision instrument makers are watching profits fall due to dwindling sales of office equipment and cameras.

Fujifilm plans to purchase Hitachi's diagnostic-imaging equipment business, which makes computed tomographic and magnetic resonance imaging machines, for 179 billion yen. The acquisition has been eagerly awaited after the company lost to Canon in a bid to acquire Toshiba Medical Systems in 2016.

After government approval of the deal, sales in Fujifilm's medical-related business are projected to reach 700 billion yen, enabling the company to take over the top spot as Japan's biggest medical equipment maker from current market leader Terumo.

"The acquisition will expand our lineup of products, allowing us to offer new value if we link it with IT and AI," Goto said.

For repairing knee cartilage, three-dimensional images will be created from MRI scans, paving the way for the treatment using regenerative medicine. The entire process can be performed through an "in-house relay."

Despite its advances, Fujifilm will still not be the biggest medical equipment maker in terms of profit. Although medical equipment and bio-CDMO operations generate high profit margins, the company foresees an operating profit ratio of 8.3% to sales in the medical-related business in fiscal 2020, lower than Terumo's 15% and Olympus' 18.6%.

Hitachi's diagnostic-imaging equipment business is not a high earner. It will be up to Fujifilm to combine its existing technologies with Hitachi's to generate bigger profits.