Hearts, minds and stomachs up for grabs in Japan's casual dining market A growing number of convenience stores in Japan offer eat-in areas like this one at a FamilyMart.
March 28, 2017 16:45 JST | Japan
CopyCopied

TOKYO - Convenience stores and fast-food restaurants in Japan are locked in a fierce battle for the stomachs of casual eaters.

Demand for quick, casual and cheap meals outside the home is growing as the number of single- and dual-income families as well as elderly consumers is on the rise. In response, convenience store chains have been increasing the number of outlets with eat-in areas, forcing fast-food providers to rethink their dining spaces.

The trend is opening up a new front in the war in the country's casual dining market. Seven-Eleven is increasing the number of stores with eat-in spaces like this one in Tokyo.

Seven-Eleven Japan, the country's largest convenience store chain, has decided to increase the number of stores with eat-in space to over 4,000 out of its existing 19,000 outlets nationwide.

The company plans to open some 1,700 new stores in the year through February 2018. Almost all outlets with sufficient floor space will be equipped with eat-in facilities.

Seven-Eleven stores offering such spaces will likely surpass 5,000 by the end of February 2018.

"As the variety of inexpensive, tasty prepared foods has increased, I often eat at a convenience store these days," a 20-year-old male university student said in the afternoon one recent day. He was eating two reheated food dishes and a cup of ramen at a Seven-Eleven store's eat-in corner in Tokyo.

But demand for prepared food products and ready-made meals like onigiri rice balls and bento box packed lunches has been firm.

While the restaurant market did not grow in the decade to 2014, remaining at a value of 24.3 trillion yen ($220 billion), the market for cooked food products expanded to 9.26 trillion yen in 2014, up over 20% from 2005, according to the Japan Ready-made Meal Association.

Lawson, another leading convenience store franchise, has already installed eat-in spaces in some 4,000 of its 13,000 stores across the nation. The number of outlets with an eat-in corner is expected to rise to 5,000 in the year to ending February 2018.

FamilyMart, another major player with a nationwide network of about 18,000 stores, operates some 6,000 outlets offering eat-in services. The chain plans add even more such stores.

Fast-food franchises are responding to this expansion strategy by refurbishing restaurants to boost the customer's experience.

Fast-food restaurants operated by major chains plan to renovate one-third of their 6,000 stores in the next several years to keep customers coming back. They will improve the quality of such facilities as seats and bathrooms. Some stores will be drastically remodeled to resemble a cafe or bar. 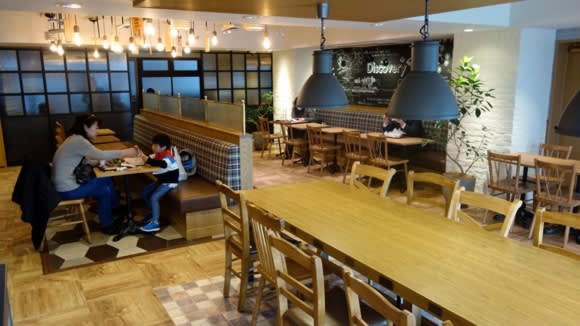 Fast-food restaurants are improving the quality of such facilities as seats and bathrooms like this new KFC in Tokyo.

Fast-food proprietors fear losing customers to convenience stores, which offer a wider variety of food and drinks, unless they offer better facilities and equipment for greater customer comfort and satisfaction.

KFC plans a rapid and massive drive to refit 600 stores, half of its existing outlets in the nation, in the four years starting in fiscal 2017. That is 150 stores per year -- three times more than the past average.

Mos Food Services, a hamburger chain, will refurbish some 100 stores in the year that starts in April.

The battle over casual diners will also be affected by government policy. Debate is ongoing about the next planned consumption tax hike, which is scheduled to be raised to 10% in October 2019.

Restaurant operators are concerned about losing even more customers to convenience stores if the proposal is adopted.