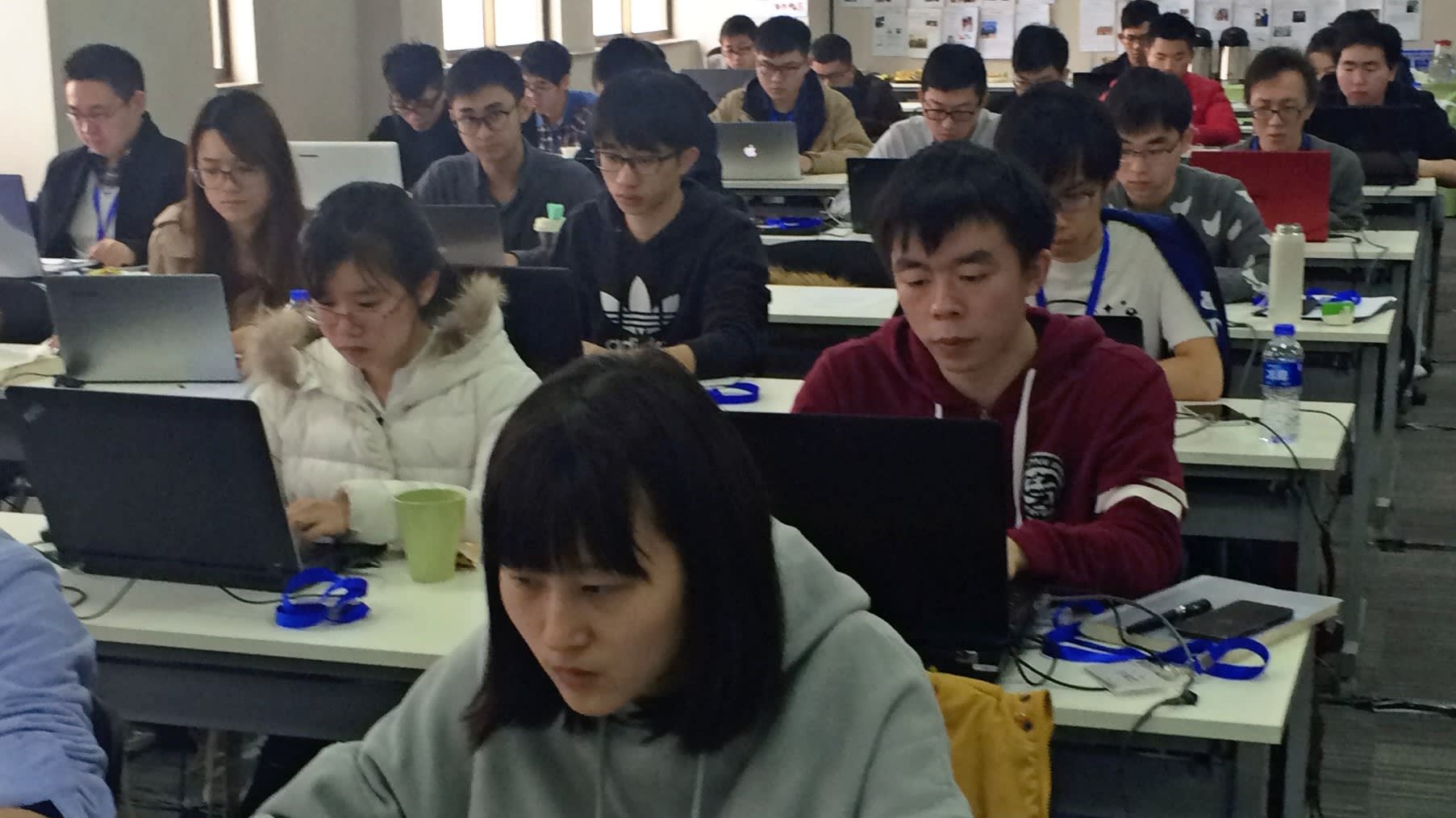 China teaches students programming from an early age in an effort to get a leg up on technology studies. (Photo by Yasuhiro Morizono)
Business

SHANGHAI/TOKYO -- The room was silent aside from the sound of fingertips tapping on keyboards. Some 50 graduate students from the top of their classes at Peking University, Tsinghua University and other schools were single-mindedly typing away as they participated in a selection process for hiring new graduates held here in March. Each of them was vying for a position at Works Applications, a Tokyo-based artificial intelligence software developer.

The subject: Create the bookstore chain of the future. The task: Build a software system to run the business. The deadline: Five days.

One participant was developing a system that analyzes a store's inventory and automatically ships books that need restocking.

The student incorporated several of the latest programming languages to write the code. When an instructor applauded the student's effort, saying, "That's solid programming, and it takes into account the customer's perspective," the student smiled in delight.

Works Applications is hiring Chinese graduates to compensate for Japan's shortage of cutting-edge information technology engineers, especially those going into the AI field. According to the Ministry of Economy, Trade and Industry, Japan is already short 15,000 engineers. That number will expand to 48,000 by 2020, the ministry said.

A Works Applications' official who is responsible for recruiting said the Chinese students create programs at a remarkable speed. Their talents also attract the attention of China's IT giants including Alibaba Group Holding and Baidu as well as U.S. companies.

The number of AI-related patent applications in China is approaching that of the U.S. The Chinese government's push to teach children not only math, physics and chemistry but also programming from an early age is bearing fruit.

However, some critics note that many Chinese academic papers related to AI follow in the footsteps of other researchers. Others have said researchers lack the ability to think practically from the market's perspective.

Wei Hui, a professor of cognitive science and AI at Fudan University, expressed a sense of crisis, stressing the need to broaden students' perspectives.

Whether entirely practical or not, there is a need for such training, and Japan has embarked on this path, too.

This month Shiga University opened a Data Science department. It is designed to foster AI talent, and courses range from science, including statistics and programming, to arts, such as economics, ethics and social psychology.

"There is a need for education that cuts across the boundaries of the arts and sciences," said Akimichi Takemura, a professor of mathematical statistics at the university, who heads the faculty.

This spring, 110 students specializing in either the arts or sciences enrolled in the department.

The university will join hands with entities such as a non-life insurance company to hold a lecture on analysis using actual data.

In the city of Osaka in March, a speech contest for junior and senior high school students was held under the theme of "jobs of the future."

One of the presentations that gathered the most attention came from a third-year junior high school student at Kinran Senri Junior & Senior High School in Osaka Prefecture who spoke about the upcoming need for experts on AI laws.

She noted that we must formulate laws governing crimes and accidents committed by AI and nurture experts who will decipher them. Constitutional law will be reviewed, and citizen judges will take part in trying AI.

"Because lawsuits filed over car accidents are a big issue in the U.S., I believe that we cannot deal with such accidents [caused by machines] under the current legal system," she said.

The next generation will coexist with AI the way we live with such things as the internet and smartphones. Whether humans control AI, or it controls us, depends on our ability to chart the future.