HIROSHIMA, Japan -- The historic visit to Hiroshima by then U.S. President Barack Obama in May last year generated a fresh wave of international interest in the city, which was devastated by the atomic bombing 72 years ago.

Seeking to capitalize on the renewed spotlight, the city has launched a "peace tourism" campaign to attract attention to sites related to the nuclear devastation other than the symbolic Atomic Bomb Dome.

While the number of foreign tourists to the city has increased sharply since Obama's high-profile trip, many of them only visit the dome, the skeletal ruins of an industrial promotion hall that stood close to ground zero, and a few other sites. Hiroshima's peace tourism program is designed to encourage visitors to travel around the city to learn more about the bombing at related facilities and places that are less widely known.

Peace Memorial Park, where the dome and the Hiroshima Peace Memorial Museum are located, is thronged every day with camera-carrying foreign tourists.

A 26-year-old Italian woman who was visiting Hiroshima in late July said Obama's pilgrimage to the city had also been reported in her country, arousing renewed public interest in the tragedy. She also said she had learned afresh about the cruelties of war.

A 55-year-old Israeli man paid a visit to the city after a business trip to Osaka in order to see evidence of the horror of nuclear weapons with his own eyes.

Many of them expanded their trips to Osaka and Kyoto to travel as far as Hiroshima. Obama's visit has clearly contributed to the rise in Hiroshima's popularity as a tourist destination.

But foreign tourists have shown a tendency to visit only a limited number of A-bomb related sites. Other than the Peace Memorial Park, Hiroshima Castle and the Memorial Cathedral for World Peace are about the only sites that attract large numbers of foreign tourists, according to a survey by the municipal government in 2015. Of the foreigners who visited the park, 43% also went to the castle, while 39% traveled to the cathedral.

Less than 10% of the visitors to the park went to see other memorials and remains, such as ruins of school buildings destroyed by the bombing. 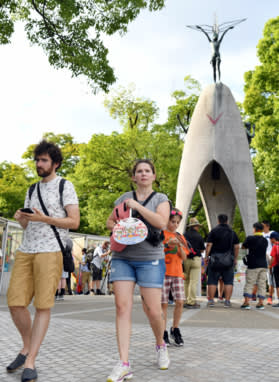 At Fukuromachi Elementary School Peace Museum, which preserves part of a ruined school building located some 460 meters from the hypocenter, an array of valuable materials are displayed, including a wall on which A-bomb survivors wrote various messages. But the museum does not attract many foreign tourists.

"I'd like to see the museum visited by more foreign tourists who have time to spend here," said Koji Fujibayasi, a museum staffer.

This fiscal year, the Hiroshima municipal government has launched a peace tourism program to promote visits to more A-bomb related sites. The program is aimed at encouraging tourists to spend more time at places that offer opportunities to learn about the ravages caused by the bomb and the city's recovery from the devastation so that they can "share our desire for peace."

The term "dark tourism" is often used to describe tourism focused on sites associated with wars, disasters and other tragedies.

But the city uses the term "peace tourism" for its new program to stress that it is more about peace than about destruction.

The municipal government set up in June an advisory council to promote the initiative involving A-bomb survivors, known as hibakusha, and peace groups.

The council is discussing possible measures to promote the program, including establishing a recommended tour route and a system to provide information about destinations based on smartphones and exchanges with citizens, including hibakusha.

The panel is learning from Boston's "Freedom Trail" walking tour program, which features a red stripe on roads stretching for 4km through the city that guides participants to 16 sites related to the American War of Independence. The proposals by the panel will be implemented next fiscal year.

Hiroshima's A-bomb sites tour program could raise some sensitive issues because these ruins and memorials are also places for consoling the souls of victims and praying for their repose.

When the city illuminated the A-bomb dome in December to commemorate the 20th anniversary of its UNESCO World Heritage registration, the move was criticized by some bomb survivors as "inappropriate" and "insensitive."

Hiroshi Harada, former director of the Hiroshima Peace Memorial Museum, who heads the council, said Obama's visit created a great opportunity for the city to send out peace messages to the world. "We will work to find an effective way for the city to communicate the importance of peace from its unique position as a city that suffered nuclear devastation."

According to the municipal government's survey of some 2,200 foreigners who visited Hiroshima in 2015, the foreign visitors came from as many as 88 countries and regions, about 40% from Europe.

Americans were the largest group, accounting for 16%, followed by Australians at 15%, Italians at 8% and Britons at 6%.

The numbers of Chinese and South Korean visitors were small, representing only 1% and 0.2% of the total.