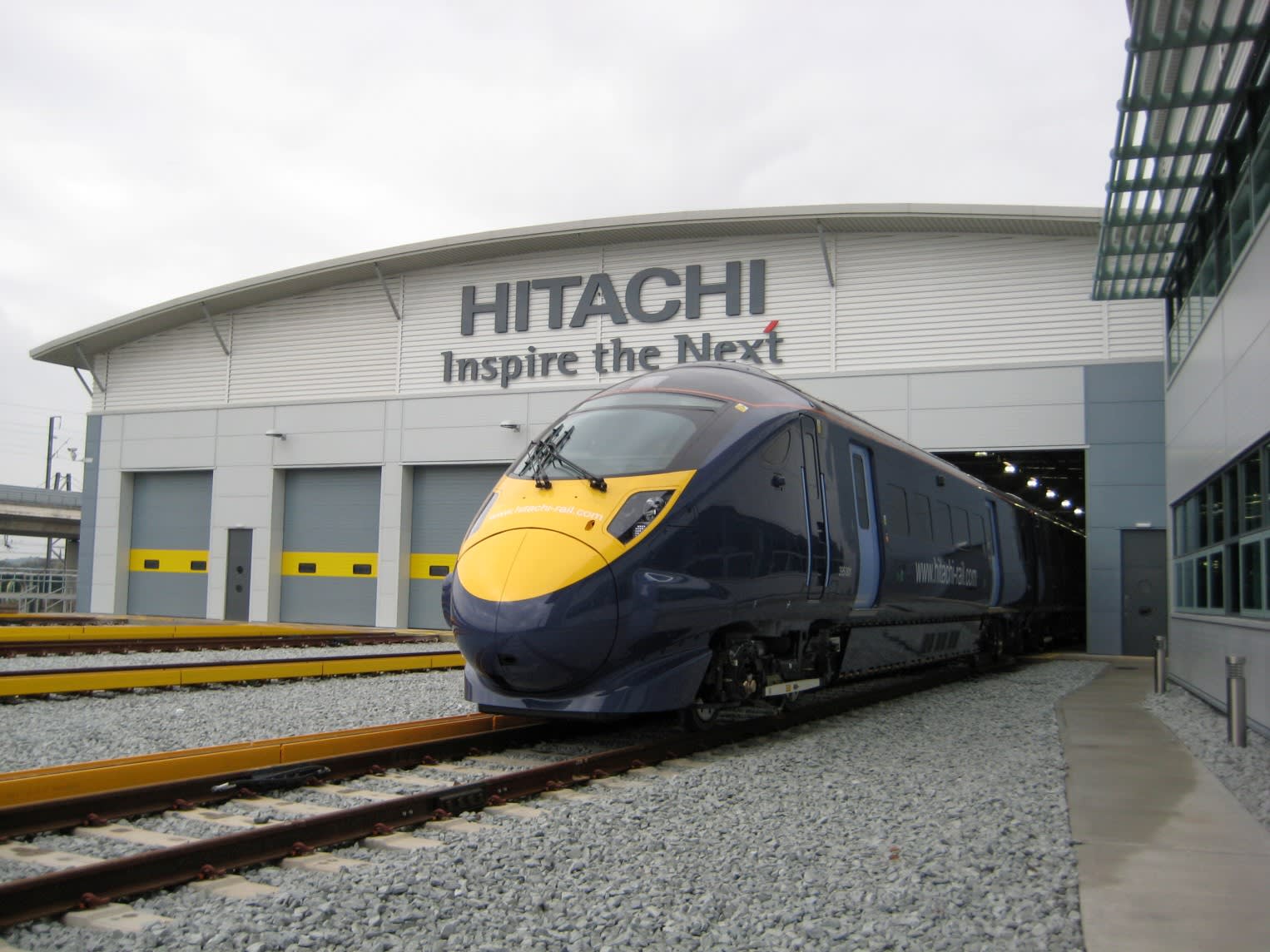 TOKYO/FRANKFURT --  Hitachi has set up the strategic headquarters for its overseas railway car operations in London with an eye toward building up a solid presence in the European rolling stock market.

The company's sales drive in Europe, which the Japanese electric machinery giant hopes will provide a springboard for global growth, is being spearheaded by Hitachi President Toshiaki Higashihara. On the morning of May 2, Higashihara stood next to Prime Minister Shinzo Abe at St. Pancras railway station, a central London railway terminus. Alstom's TGV, left, and Siemens' ICE at the Gare de l'Est in Paris.

Abe rode a Hitachi-built rail car that was used to carry people from central London to stations near venues of the 2012 Summer Olympics. The same model is used as the British Rail Class 395 for high-speed commuter services between London and the U.K. end of the Channel Tunnel, through Kent.

Hitachi won the contract to supply Class 395 trains in bidding that pitted the company against European powerhouses like Alstom of France and Siemens of Germany. Hitachi regards the Class 395 as the main bridgehead of its global railway car operations.

"Our track records of on-time deliveries, which are taken for granted (in Japan), were a key factor (behind the successful bid)," a senior Hitachi executive said.

The high reliability of Hitachi's rail cars, which can run even during heavy snowfall, has also boosted the company's reputation in Europe, helping it bag the contract to supply 866 rail carriages for the British government's Intercity Express Program (IEP) to replace aging high-speed trains for 5.7 billion pounds ($9.61 billion).

Alistair Dormer, executive chairman and CEO of Hitachi Rail Europe, was made global CEO to supervise the company's railway-related businesses from the newly created headquarters in London.

In Japan, railway car suppliers design and manufacture units specifically to meet each customer's needs, but this is not how the rest of the world works.

"In overseas markets, railway operators select cars as if they were choosing a book from a bookshelf," said Shinya Mitsudomi, global chief strategy officer.

Hitachi has developed a concept design for the AT-200, a train intended for commuter services and capable of a maximum speed of 160kph, and is staging a sales drive for the new model in the U.K. and Germany.

The company is also developing a design for high-speed train cars based on IEP carriages.

The main challenge to ramping up Hitachi's share in the European market is the Big Three in the world's rolling stock market: Alstom, Siemens and Bombardier of Canada, whose railway unit is based in Berlin.

These three juggernauts each boast railway-related sales of around $7.75 billion.

The ongoing acquisition battle between Siemens and General Electric of the U.S. over Alstom's energy business may give Hitachi cause for concern. To win over Alstom, Siemens has proposed integrating its railway operations with those of the French company.

A combination of the railway car units of the two companies would be a behemoth with annual sales of 1.7 trillion yen, more than 10 times greater than Hitachi's.

The proposal has the backing of some policymakers within the French government.

Another potential threat to Hitachi is the ongoing negotiations for an economic partnership agreement between Japan and the European Union. One of the EU's key demands is better access to the Japanese market for railway cars. The European side has complained that Japan keeps its door closed to foreign makers, while Europe's market is open, as indicated by Hitachi's successful bid to supply cars to the British rail.

Some European companies are pushing for the exclusion from the EU market of makers from countries whose government procurements are not open to European competitors.

Alstom is leading the campaign for this proposal, with Alstom CEO Patrick Kron arguing that Japan's distinctive safety requirements are hampering foreign access to its market.

Alstom is desperate to boost its competitive position in Europe after suffering costly setbacks recently, including its failure to win in the contract to supply cars for Eurostar, a high-speed railway service connecting London with Paris and Brussels through the Channel Tunnel.

Meanwhile, competition is intensifying in the global market for rail cars, which the Association of the European Rail Industry estimates will be worth 170 billion euros ($234 billion) in 2015-2017 average.

Hitachi sees Europe, which accounts for 30% of the global market, as the key to an effective global expansion strategy.