Home-sharing operators in Japan tighten ship ahead of new law TOKYO – Two home-sharing giants made moves on Monday to meet a new law coming into effect on June 15 that simplifies the registration process for hosts to rent out their properties in Japan.

U.S.-based home-sharing and holiday rental website, HomeAway, a unit of Expedia travel group, announced that it would start renting out traditional Japanese properties in rural areas and said it would keep listings of unregistered properties until June 15. Its rival and the biggest in the industry, Airbnb, however, withdrew advertisements for properties that had not yet been registered, cutting its offerings by 80%.

Japan's home-sharing market had fallen into a legal gray zone as lawmakers had failed to catch up with the rapid growth of the industry. Many homeowners had obtained neither a required permit under the hotel law nor certification in a special economic zone. The new law is intended to lower the hurdle by requiring hosts to simply register their properties for rent for up to 180 days per year with local authorities.

HomeAway sees the move as an opportunity to differentiate its business by renting out properties in the countryside.

“We are willing to spread the attraction of Japanese rural areas to foreign tourists by providing unique experience at traditional houses,” HomeAway Country Manager Natsuko Kimura said. The company is collaborating with Japan Kominka Association and Rakuten LIFULL STAY.

Kominka means “traditional house” in Japanese and there are roughly 1.3 million in the country. These are vetted and approved by JKA, a group of 14,000 surveyors that check the safety of these houses, some of which were built more than 50 years ago.

Rakuten operates the rental services, including cleaning and handling enquiries, for which owners or investors pay an operating cost. These three organizations are expected to develop 30 houses by the end of the year.

HomeAway, which now displays approximately 10,000 properties in Japan, has been expanding its vacation rental services since 2005, mainly focusing on family accommodation, unlikely its biggest rival Airbnb which tends to list city apartments.

In contrast to the HomeAway's strategy, Airbnb took a rather defensive step ahead of the enforcement of the new law. It stopped displaying accommodation from hosts in Japan that hadn't registered their operations, reducing its offerings to just 13,800 properties, or 80% less than in the spring. 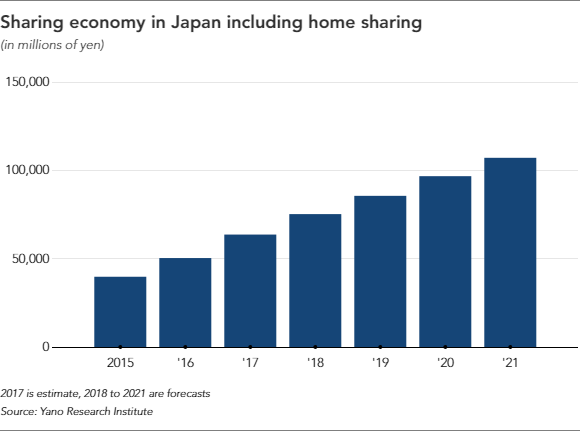 Airbnb established a Japanese subsidiary in 2014 and has been rapidly growing since. Its operations elsewhere in the world have also come under scrutiny as the lack of legal framework for home-sharing services could leave owners, investors and holiday makers without recourse should anything go wrong.

Japan Tourism Agency said that home-sharing registration began in March, but as of May 11, only 724 hosts had completed the process.

Some critics said that the 180 day limit under the new law is too restrictive and makes it hard for owners or investors to turn a profit. Regulations of local governments, beside the ones of central government, that limit the areas and period of operation could also be stumbling blocks.

However, Takeshi Fuse, senior vice president of head of planning & research divisionat the Kansai branch of the Development Bank of Japan, said that the new law was necessary for the development of home-sharing services in Japan. In the bank's research in 2016, 12% of foreign visitors have used such a service, while 27% were willing to try it. “The growth of the home-sharing market will continue as long as there is a gap between these numbers,” he said.