TOKYO -- Honda Motor tops the list of 20 Japanese companies with the largest planned increase in research and development investments for fiscal 2017, a Nikkei survey showed.

It is the first time in two years that the automaker has held the top spot.

The automaker expects total costs to grow by 64.7 billion yen ($587 million) from the previous fiscal year to a record 750 billion yen. Most of the investments are earmarked for development of state-of-the-art technologies such as autonomous driving and electric vehicles.

It will also funnel some of the investments into new car development.

Artificial intelligence and other areas in which the automotive industry has hitherto lacked know-how are becoming increasingly important. Honda is scrambling to put the new technologies into practical use through tie-ups with other companies. 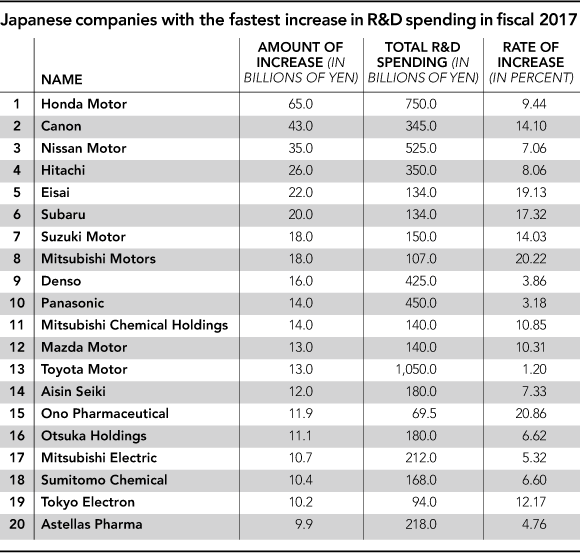 Nikkei polled R&D executives from 539 major companies across Japan via questionnaire. Valid responses were received from 307, or 57% of the total.

The survey looked at R&D investments planned by 268 companies for fiscal 2017 and found the combined investments projected to rise 5.7% over fiscal 2016 to 12.0444 trillion yen.

Canon, with the second-largest planned increase, forecasts an investment of 345 billion yen, up 42.6 billion yen.

Responding to slumping demand for its multifunction machines, cameras and other existing businesses, the company is stepping up research and development investments in medical, network cameras, industrial equipment and commercial printing.

Auto-related companies generally ranked high in the survey. Third-place Nissan Motor sees an increase of 34.6 billion yen to 525 billion yen -- its second-largest R&D investments after the fiscal 2015 figure of 531.9 billion yen. The automaker will grapple with development of AI-related technologies and high-capacity batteries used for autonomous driving.

Other top performers in the automotive industry were Subaru, which ranked sixth, followed by Suzuki Motor and Mitsubishi Motors. Denso ranked ninth.

Subaru President Yasuyuki Yoshinaga said that the increase in R&D investments is necessary to "survive in the automotive industry where technological revolution is advancing."

Hitachi, Panasonic and other information technology-related companies are aggressively investing in the internet of things and other technologies.

Many companies related to food, medicine, and biotechnology -- such as Eisai, Ono Pharmaceutical, and Otsuka Holdings -- are ramping up investments amid stiff global competition for new drugs development.

The survey also rated expectations of which new technologies would create business opportunities. AI ranked highest at an average of 4.5 out of 5, followed by robots and drones.