Honda puts its most advanced factory in Thailand 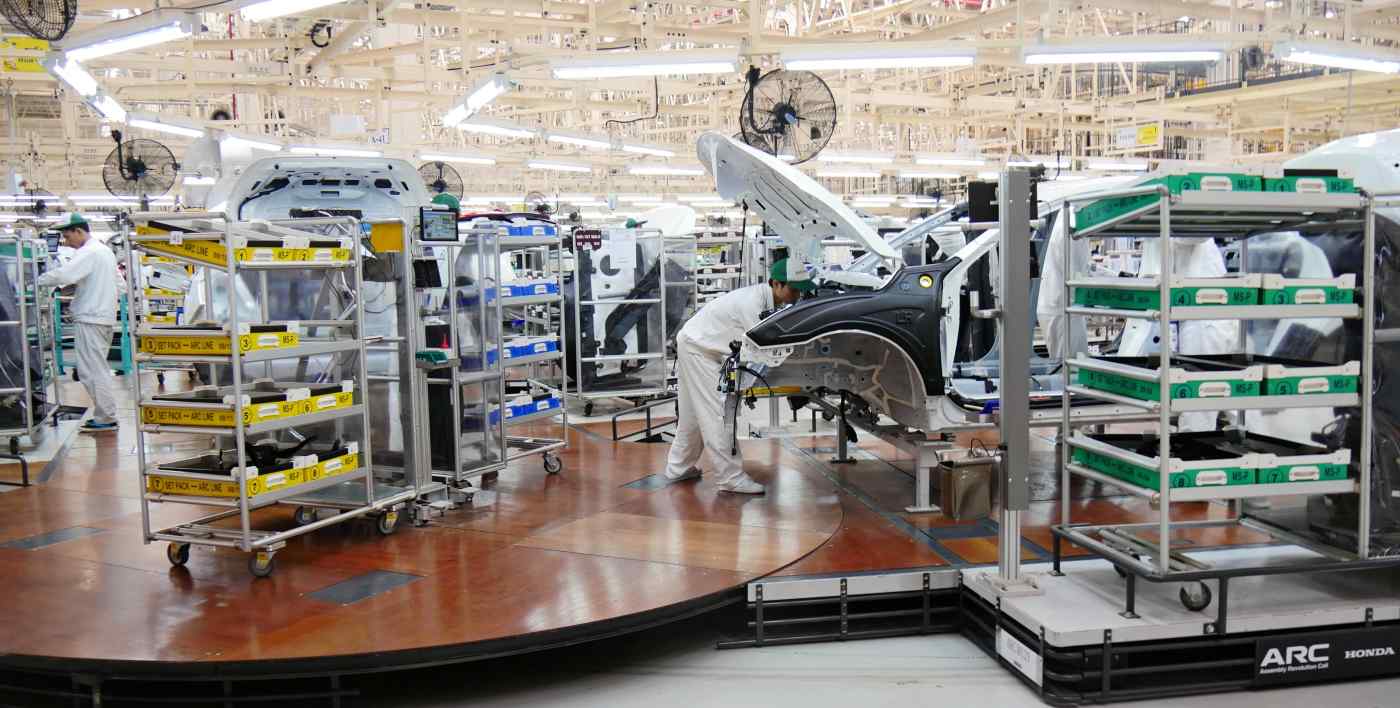 At Honda's most advanced factory, in Prachin Buri Province, central Thailand, teams of four workers put together cars in unison, rather than each worker attaching his or her assigned part one after the other.
HIROSHI KOTANI and TAMAKI KYOZUKA, Nikkei staff writersMay 19, 2016 13:00 JST | ASEAN
CopyCopied

BANGKOK -- Honda Motor has launched a new plant in central Thailand that is equipped with the world's first moving cell assembly line, dubbed the Assembly Revolution Cell Line. It is a hybrid of a conventional line production system and a cell-based manufacturing system that has proven as revolutionary as its name suggests. In it, each worker is responsible for multiple tasks.

As a half-finished Civic sedan comes along the conveyor, a team of four assemblers steps onto the moving floor along with carts containing auto parts. In about 500 seconds, each of the four installs 10 to 20 parts.

In conventional line production, each worker has a few dozen seconds to attach a single part to a vehicle, which moves along from worker to worker.

Next to the moving ARC Line is an auto parts supply area. Parts collectors walk through the area and quickly pick up parts from the shelves according to computer-generated instructions. Each cart only contains the necessary parts for each worker's next assembly session. This keeps workers from attaching the wrong parts or leaving something out. Since all the parts are already prepared, the team spends little time looking for what each member needs.

The system not only prevents mistakes but also helps make workers more versatile as they are involved in a variety of tasks.

Honda introduced the ARC Line system in three sections of the plant -- lines for attaching wire harnesses, interior parts and exterior parts. Each ARC Line is integrated into a section of each production line where the flow turns around, giving the teams a short way to get back to the starting point.

"With the launch of the new plant equipped with the cutting-edge production technology, Thailand will become ever more important [for the company]," Honda President Takahiro Hachigo said earlier this month at the opening ceremony. The new system has reduced workers' movement inside the plant and increased efficiency by 10%. In a 500-second cycle, assemblers can complete work that used to take some 550 seconds.

The ARC Line system may spread to other Honda plants around the world. With the system, Honda hopes to nurture skilled workers with a broad understanding of assembly work who can give feedback to developers. So the system is not a tool merely to increase efficiency but to boost the automaker's technical base.

The ARC Line is not the only innovation at the plant. Honda has also introduced a floating conveyor for a 200-meter section between welding and coating.

The conveyor has resin floats attached underneath and runs on the water used to cool jigs in the preceding welding section. By recycling the pump-generated water current in the welding section, the electricity cost has been cut by 96%, a Honda engineer said.

In 2013, Honda opened the Yorii Automobile Plant in Saitama Prefecture, north of Tokyo. At the time, it was the company's most advanced plant. The Thai factory, however, is even more cutting-edge, a sign that the automaker's manufacturing process continues to evolve across borders.