HONG KONG -- Hong Kong Disneyland sank into the red for a second consecutive year as a plunge in mainland Chinese visitors and stiffer competition ate into earnings at the world's smallest Disney theme park.

The net loss at the theme park widened to 171 million Hong Kong dollars ($22 million) for the fiscal year ended last September, following a HK$148 million loss the previous year. The park has only made a profit in three of the 11 years since it began operations -- between 2012 and 2014 during a tourism boom in Hong Kong.

Revenue also fell 6% on the year to reach HK$4.8 million in fiscal 2016, owing to fewer mainland visitors. Park attendance was 6.1 million, down 10% from a year earlier.

"It's still a challenging environment," said Managing Director Samuel Lau Wing-kee on Monday, citing unfavorable factors such as regional competition and a local currency that is pegged to the stronger U.S. dollar. "But we've seen a slow turnaround in our attendance since summer."

While locals made up 39% of the park attendance, international visitors accounted for a quarter -- the second-highest level for the park -- as it saw double-digit growth in visitors from markets such as South Korea, the Philippines, Thailand and Taiwan. Japanese tourist arrivals were up 37% year-on-year during the period.

However, the percentage of mainland tourists was down to 36%, the lowest level since 2009, following the launch of the larger Shanghai Disneyland in June. The latter attracted a daily average of 30,000 visitors, or 5.6 million guests in the first six months of operation -- nearly equivalent to the full-year park attendance of its Hong Kong counterpart.

Lau dismissed claims that Shanghai Disneyland had drawn mainland tourists away. "China is a big enough market to be able to accommodate both parks," he said, adding that the U.S. is home to two Disney parks. "The future is still bright here."

Latest promotional efforts include selling tickets bundled with transportation to attract tourists from the southern Chinese province of Guangdong. During the Chinese New Year holiday in late January, the park reported a 13% increase in attendance from a year ago.

About a third the size of the Shanghai theme park, Hong Kong Disneyland is also slated for a long-overdue expansion. In late April, it will open its third hotel, Disney Explorers Lodge, amid concerns that the resort's occupancy rate, currently at about 80%, will be dragged lower at a time of a tourism downturn in Hong Kong.

Lau said the park's hotels had benefited from a "tremendous increase" in employee reward programs provided by corporate clients. "Another hotel will allow us to do more," he said, adding that the park saw a 70% surge in hotel room nights -- an indicator of occupancy -- as a result of its convention and corporate business.

In November, Walt Disney announced that new attractions will be launched in the Hong Kong park between 2018 and 2023. These include a refurbished Sleeping Beauty castle, new rides featuring Marvel superheroes and a theme area based on the Disney movie "Frozen." 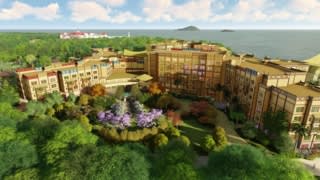 A graphic rendering of Hong Kong Disneyland's third hotel, the Explorers Lodge, which is slated to open in late April.(Provided by the company)

According to plans, the Hong Kong government, which has a 53% stake in the park, will invest $750 million into the project and Walt Disney will pay for the rest.

Nonetheless, the project is subject to uncertainty as the legislature in Hong Kong has been divided on whether Disney should be expanding when it has been making hefty financial losses. Lawmakers also questioned whether Disney should continue to charge management fees and royalties of about 10% on ticket sales and 5% on merchandise and food.

Commenting on the resistance in the city's legislature, Lau said he was "hopeful" that all stakeholders would continue to "invest in the future" of the park. "This is a major tourism infrastructure for Hong Kong and for the region as to how we remain competitive in terms of attracting more visitors," he said.