HONG KONG -- If there was ever a film industry that has been transformed by the mighty Chinese box office, it is here, in what was once called the Hollywood of the East.

Bruce Lee, Jackie Chan and director Wong Kar-wai all launched their dazzling international careers in Hong Kong, the former British colony, which churned out hundreds of movies a year in the 1980s. In the late 1990s, however, demand was hit by rampant piracy and the Asian financial crisis, which crushed consumer spending in South Korea and Southeast Asian countries where Hong Kong's slapstick comedies and death-defying action movies were popular. That's when the industry started looking to the fledgling market across the border.

"The Chinese box office only really took off in the last five years and it was negligible 10 years ago," said Rosa Li, a Hong Kong-based film consultant. 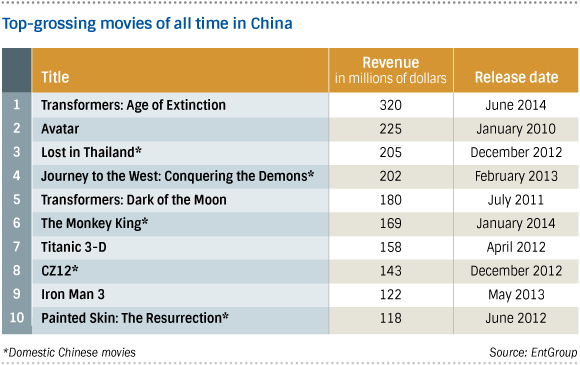 Last year, Chinese cinemas yielded $3.6 billion in revenue, roughly 17 times the figure for Hong Kong's local box-office receipts. Its importance led the chairman of Hong Kong's Film Development Fund to say recently that there would be no such thing as "Hong Kong films" soon and urged local filmmakers to avoid works that cannot sell on the mainland.

An estimated 20-25% of Hong Kong's film professionals are living in Beijing full time. Many more are either residing in other mainland cities or frequently commute there from Hong Kong. These people are the experts when it comes to navigating this labyrinthine and tightly controlled film market, which has become the second-largest in the world after the U.S., especially when it comes to dealing with the country's notoriously conservative censors.

A number of agencies in the communist country are involved in judging what's right for the local audience. There's the mighty State Administration of Press, Publication, Radio, Film and Television, which limits the number of foreign films shown each year to 34 and only if they are deemed innocuous enough. And there are state-owned and private companies which coproduce films with Hong Kong and a growing number of foreign filmmakers. The most powerful of these, such as the China Film Group, have the power to gauge the suitability of content proposed by outside directors and script writers.

Films that are politically sensitive, films that explore the underbelly of Chinese society, and films that are sexually explicit, violent or have to do with the supernatural are all at risk of being banned or having large chunks left on the cutting room floor, said Herman Yau, a well-known director who is writing a doctorate thesis on film censorship in Hong Kong.

"Last year, I submitted a story about Japanese spies in China in the 1930s. It was definitely not anti-China. Still, the potential coproduction partner came back saying I wouldn't be able to show it on the mainland because Sino-Japanese relations were bad and the government didn't want anyone to stir things up, even if it's a film that is sympathetic to China," he said.

The challenge of the mainland market is that the boundaries are constantly shifting and seemingly unrelated developments can lead to surprising decisions by the censors.

One example Yau cited was a joint mainland-Hong Kong production called "Painted Skin." Ghosts are generally banned from mainland Chinese cinemas because the Communist Party frowns upon superstitious beliefs. The horror film was probably waved through because the Ningxia autonomous region of the Hui people was a major investor, according to Yau. "Things were flaring up in Tibet at the time and I heard that the authorities didn't want to do anything that would be seen as provocative by the minorities," he said.

Chinese censors are also becoming more relaxed about violence and nudity. "I produced a film last year called 'Control' and there was quite a lot of blood in it. Surprisingly, it was approved for mainland distribution without any change to the script at all," Li said.

But the state is still determined to control ideological discourse on the mainland and that extends far beyond the official film censors. A culture of biting your tongue means that mainland Chinese filmmakers are playing a relatively small part in the industry, according to Bey Logan, a Hong Kong-based film producer who is currently working on the sequel to "Crouching Tiger, Hidden Dragon" with the China Film Group and Hollywood's The Weinstein Company.

"I think self-censorship is more common than 'real' censorship. It is also more insidious. If you are afraid of speaking your mind, you cannot be a valid filmmaker. Mainland Chinese filmmakers generally lack chutzpah. That's why a disproportionately high number of Hong Kong people are employed in mainland Chinese film production," Logan said.

In fact, the combination of Hong Kong talent and deep-pocketed mainland investors has proven to be a winning formula. Last year, the best-selling film in mainland China was "Journey to the West: Conquering the Demons," directed by Hong Kong comedian Stephen Chow and funded by the Huayi Brothers Media, one of China's largest private film companies. The modern take on a familiar Chinese fairy tale sold $202 million worth of tickets on the mainland, far more than the $122 million yielded by "Iron Man 3," the most popular foreign film in 2013. Of the 30 top Chinese language films shown last year, 14 were made by Hong Kong directors.

Two-thirds of Hong Kong films today are coproduced with a mainland Chinese partner. This category of films doesn't come under the foreign film quota and also tends to get better distribution deals. But coproductions need to be deemed culturally relevant to mainland China and a common complaint in Hong Kong is that far fewer films are being made for the Hong Kong audience.

Cassandra Chan is a Hong Kong filmmaker originally from Singapore and she mourns the end of the "golden age" of Hong Kong's film industry. It's not necessarily to do with mainland China, she said. "I grew up watching films by Tsui Hark and John Woo. I was so excited when I moved here. But I have become a bit disillusioned. Hong Kong films are still great at action and visuals. But they lack good storytelling. The government hasn't done a great job nurturing young talent," she said.

Not everyone in Hong Kong is making films for mainland distribution. A surprise 2011 hit, "3D Sex and Zen," was banned by Beijing's state administration but its maker, China 3D Digital Entertainment, still managed to make around $6 million in global sales.

Around half of that was in Hong Kong, where the regular cinema-going population is only around 250,000 and many of those are not old enough to see the world's first 3-D sex film.

The former advertising executive has a pragmatic view on Chinese censorship. He points out that China 3D films are not all banned on the mainland, even though the founder of the company has regularly spoken out on Chinese politics.

"If you are determined to make a reactionary film that's bound to upset Beijing, then you are childish," he said. "Let's face it. Nobody would want to see such a film anyway. We don't worry about censorship much. We just worry about what the market wants."

Logan thinks that change will come from within mainland China. "Young people are reading things online, and watching every film that has ever been made on pirated DVDs. They will come up and take the reins one day," he said.

In the meantime, Yau tells fellow filmmakers not to give up. "History is cunning. You never know what's going to happen next, so just keep on trying!"