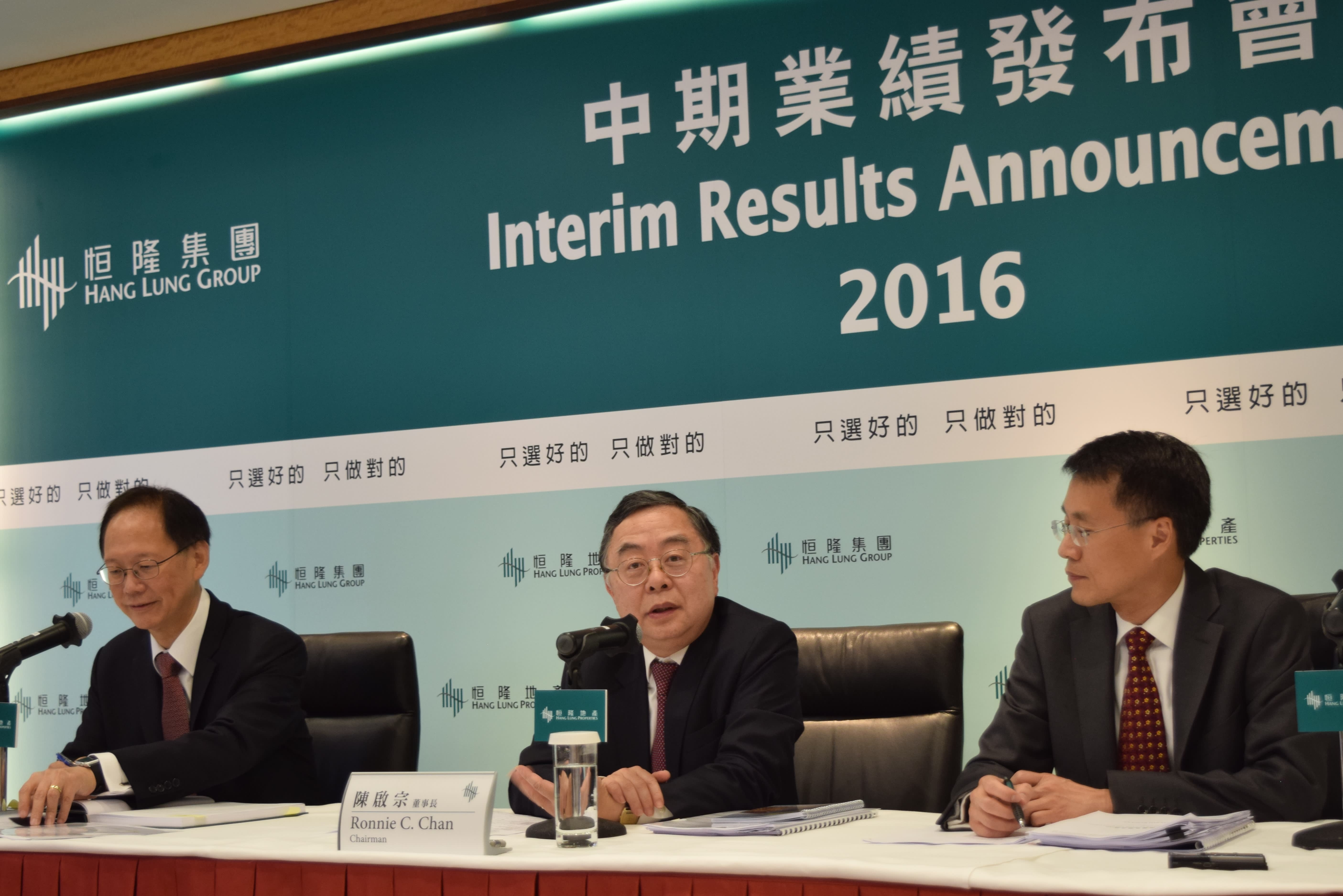 Hang Lung, the first major Hong Kong developer to announce its earnings, on Thursday reported net profit up 3% to 2.94 billion Hong Kong dollars ($379 million) for the six months ended June. Underlying profits -- an indicator typically used by analysts to eliminate the impact of property revaluation -- surged 29% on the year to HK$3.17 billion.

Revenue jumped 37% to HK$6.31 billion driven by higher property sales, which nearly tripled to HK$2.4 billion as the developer aggressively shed inventory in Hong Kong. In the first six months, some 230 residential units from two projects were sold, significantly up from full-year sales of 63 apartments last year.

"We are striving to have some growth in Hong Kong, which I think is doable but mainland China is more challenging," said chairman Ronnie Chan Chi-chung. But the group was bullish on China in the long-run, particularly second-tier cities, he added.

"China is still one of the rare places around the world where you still get 5% to 7% growth, so my view is don't focus on the short-term woes of China," he told reporters.

Rental income from mainland China fell 4%, hit by the slowing economy. Excluding the impact of Chinese yuan depreciation, its mainland portfolio -- comprising offices and eight shopping malls in cities such as Shanghai, Shenyang and Tianjin -- generated moderate rental growth of 2%.

In contrast, rental revenue rose 7% in Hong Kong, despite a slump in wealthy Chinese tourists visiting the city. To weather the retail downturn, the group upgraded its malls in Causeway Bay, a prime shopping district, to bring in mass-market multinational tenants such as sportswear retailer Adidas and fast-fashion chain H&M, nearly doubling its mall rental.

Calling the Hong Kong market still "healthy," Chan noted that the recent pricing adjustment could be taken as a positive sign. "I think we have the chance of entering into a phase of relative stability in residential prices, which is at the end of the day [something] any society, any government, any citizen should be looking forward [to]," he added.

Some analysts say the deferral of U.S. interest rate rises after the U.K.'s late June vote to leave the European Union has led to more positive buying sentiment recently, but others warn of pitfalls.

"Exemplary sales at new launches have seen market sentiment turn more positive over the last two months," said Henry Mok, regional director of capital markets at Jones Lang LaSalle in Hong Kong on Wednesday. "But this is nothing more than a temporary rebound during the course of a downturn, and does not imply the property market is turning a corner."

Hang Lung's stock closed 1.8% higher at HK$17.0 on Thursday. Its shares have fallen 5.2% this year, underperforming the Hang Seng Index's 1.4% loss. The developer announced an interim dividend of HK$0.17 per share, the same as last year.