TOKYO -- Entrepreneurship is flourishing around the globe, and Niklas Zennstrom wants to assist the creators of tomorrow's next big things. 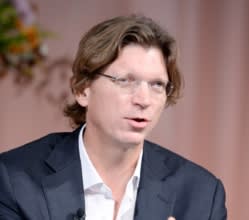 Zennstrom, appearing at the Nikkei Global Management Forum in Tokyo on Tuesday, credited the proliferation of smartphones and the explosion of Internet connectivity with fueling startups outside Silicon Valley. But while there is no shortage of strong-willed entrepreneurs, he said that without "support and [a conducive] ecosystem, they cannot succeed."

Zennstrom co-founded the Skype online telephone service. After the company was sold to eBay in 2005, he went on to establish Atomico, a London-based venture capital firm focusing on technology.

Atomico, Zennstrom said, recently conducted a survey that showed the extent of entrepreneurship's spread. The study looked at 134 companies that were founded in the last 10 years and had reached valuations of $1 billion. Of those, 60% originated outside California's tech hub.

"Ten years ago, people [thought] we were crazy to build a Swedish company," he said.

When Skype was established in 2002, it faced a great deal of reluctance from investors. This was one reason Zennstrom started Atomico. He wanted to prove that not only did Skype thrive outside of Silicon Valley -- such success need not be unusual.

A lot has changed. Stockholm had the second-highest number of $1 billion companies in Atomico's survey, after Silicon Valley. Helsinki's tech sector is also on the rise because, as Zennstrom put it, "success breeds success."

"People are not just making careers [at] Nokia but building their own companies," he said.

Japan, where Prime Minister Shinzo Abe aims to stoke entrepreneurship, has the potential to move in the same direction as the Nordic market, Zennstrom said. While most Japanese students still prefer joining larger employers out of college, he stressed that will change, though it may take time.

"The more great startup companies you have, you start having a shift," Zennstrom said. "Smarter young people are going to join these startups."

Smart News is expanding into international markets, such as the U.S. And while Japanese startups tend to focus on the large domestic market, Zennstrom predicts that like Smart News, more will start branching out globally.