TOKYO -- In deciding to acquire control of Ichibanya, which operates the CoCo Ichibanya chain of curry restaurants, Japan's House Foods Group took a major step toward its ambitious goal of putting Japanese-style curry on the culinary map of the world. 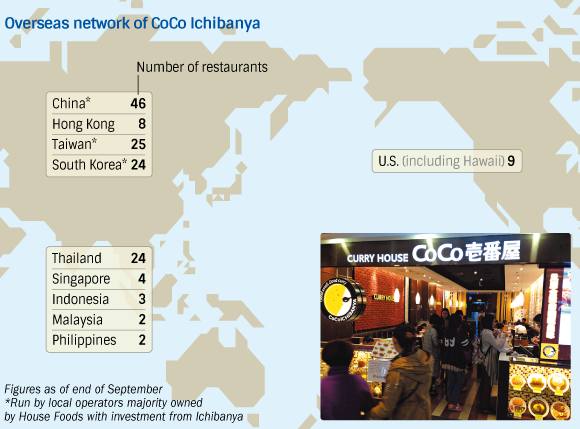 For House Foods, greater popularity of "curry rice" outside of Japan, where it is one of the nation's most beloved dishes, means bigger sales of its curry roux.

Ichibanya is a famous success story in Japan's restaurant industry. It started out as a small cafe and has since grown into the world's largest chain of curry restaurants, with some 1,400 locations around the world.

House Foods will acquire the entire 23.17% stake held by Ichibanya's founders, Tokuji Munetsugu and his wife, Naomi, and a holding company. House Foods plans to raise its stake in the restaurant operator to 51% from the current 19.55% through the acquisition of these and other shares, at a total cost of some 30 billion yen ($243 million).

Speaking at a press conference announcing the deal on Oct. 30, Ichibanya President Toshiya Hamajima said the company's founders had expressed their desire to sell their stake in July.

Hamajima, who started out with the company as a part-timer, has been leading Ichibanya's overseas expansion. His ambitious growth agenda led to a record profit for the year through May 2015.

Since its foundation, Ichibanya has maintained a close business relationship with House Foods, which supplies ingredients to the chain.

In 2002, House Foods became the company's second-largest shareholder, with a stake of about 20%.

Ichibanya apparently believes that becoming a subsidiary of the food giant is the best way to ensure its long-term viability.

The companies also expect to achieve substantial cost savings by streamlining and combining their production and procurement operations.

The benefits from the takeover are expected to be the biggest for their operations abroad, where Japanese-style curry is gradually gaining popularity, especially in other Asian countries.

The partners have been jointly operating CoCo Ichibanya outlets in China since 2004. The chain had 46 locations in Beijing, Shanghai and other major cities, mainly in coastal areas, as of the end of September.

House Foods has been using the chain to popularize Japanese curry in China with an eye to expanding sales of its roux in the vast market. It plans to increase the number of curry restaurants in China to 100 by 2017.

"The restaurants can act as an initial foothold for our manufacturing foray into the market," Urakami said.

Ichibanya has also expanded into other countries, including Thailand, Singapore and Indonesia on its own. There are already 147 CoCo Ichibanya restaurants outside Japan.

House Foods previously set a target of raising the ratio of overseas sales to 15% of its total in the fiscal year through March 2018, up from 10% in fiscal 2014. With the acquisition of Ichibanya, House Foods may raise that target.