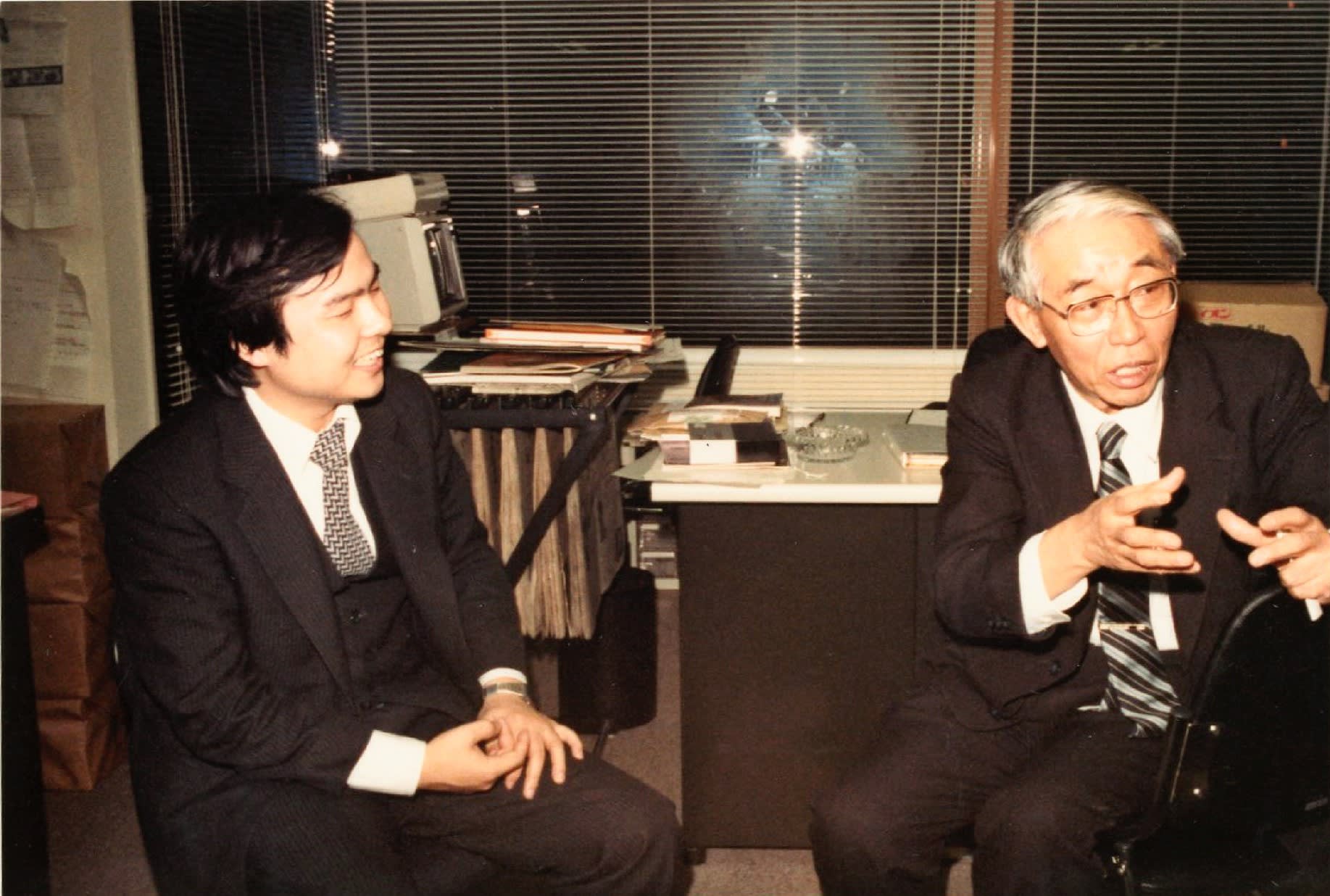 TOKYO -- News footage released May 20 by local media in Saudi Arabia surprised diplomatic insiders and businesspeople in the U.S. and Japan.

The scene is in the royal palace in the capital, Riyadh. In the center of a large hall with white walls and a gorgeously carpeted floor sits Saudi's King Salman and U.S. President Donald Trump. On one side of them are Saudi government officials in traditional dress, and on the other, visitors from the U.S.

Then, SoftBank Group President Masayoshi Son steps out from the U.S. side. He walks to the front of the king, exchanges documents with a Saudi government official and shakes hands with him. Trump looks on with a broad smile, and appears to shout something to Son. The surprising footage is clearly shows how much Son's relationship with Trump has developed.

The footage is from the ceremony to exchange agreement documents for a 10 trillion yen ($93 billion) investment fund Son has persuaded the Saudis to join. What is unusual was that it happened during a summit between the U.S. and Saudi leaders.

They say there is no one in the world Son cannot meet. His personal connection-building began when he met one man.

"I vouch for this young man"

On April 28, 2014, Son and SoftBank executives gathered at the Toyoken restaurant in Tokyo's Motoakasaka district. The event was a birthday party for Tadashi Sasaki, who was turning 100 years old.

Son stood up to say a few words, which included: "If I hadn't met you, Sasaki-sensei, at the time I was a student at Berkeley, none of us SoftBank executives would be here. I get speechless with emotion when I think about it."

He then produced a traditional "shikishi" autograph board, wrote on it and read it aloud: "Everything started when I met 'sensei.' Thank you so much." Tears rolled down his cheeks.

Son met Sasaki in the summer of his 21st year, when he was a student at the University of California, Berkeley. He had temporarily returned to Japan during the summer vacation and tried to sell an electronic translator he had codeveloped with some Berkeley professors. He kept meeting rejections until he met Sasaki, whom Son scheduled to meet last before he returned to the U.S. Sasaki was moved by Son's passionate pitch and agreed to sell it. To this day, Son describes Sasaki, who provided his first chance to start a business, as "my savior, like my Buddha."

In 1981, after he returned from the U.S., Son founded SoftBank, but the company soon fell into financial difficulties. Son asked a bank for an uncollateralized loan of 100 million yen, but the bank balked because the company lacked a track record. When he heard the story from Son, Sasaki quickly called a director of the bank, an old friend.

"I vouch for this young man called Masayoshi Son. I ask you to grant the loan. I can offer my retirement money and my home as collateral if you want," Sasaki said.

That call opened the path to Son's future.

SoftBank again faced a crisis in 1986, five years after its establishment, when about 20 of its executives left to start a copy of the company. They took with them the entire customer list, and SoftBank's sales nosedived. This part of the company's history has rarely been talked about.

Son called those who left him traitors, but Sasaki told him: "Look, Son-kun, you should think about the many kinds of connections there are -- I'm talking about the connections between people. Remember, no connection is stronger than those formed by camaraderie."

"I couldn't share the same ambitions with them," Son once recalled. "The people who left me weren't all that great and I didn't have the magnetism" to attract people.

Connections based on shared ambitions now form the foundation of Son's management philosophy.

The following year saw an incident in which Son put that thinking into practice. There was someone Son just had to meet -- Bill Gates, the founder of Microsoft.

Gates was just two years older, but he was someone who Son deeply admired. When he set up SoftBank, Son believed the driving force in the computer industry was shifting from hardware to software. And this grand shift was brought on by Gates, who introduced the Windows operating system, which eventually turned PCs into household appliances.

In July 1987, Son flew to Seattle to interview Gates for a magazine published by his company -- although he was able to make an appointment only after he arrived. 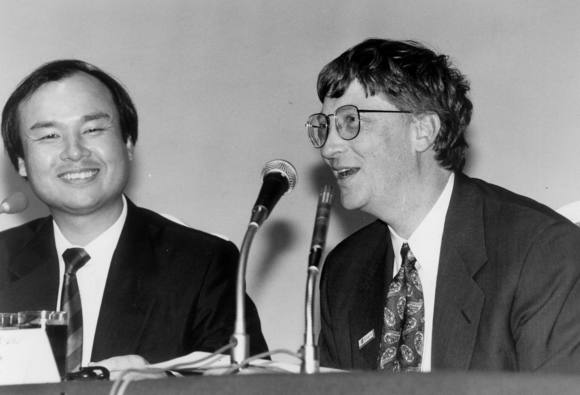 As soon as the interview began, Gates picked up a copy of PC Week magazine, and remarked that every issue of the magazine was worth reading.

Son took Gates' comment to heart. In fact, he listed his company's shares to raise funds, and used the money to acquire the publishing arm of U.S. company Ziff Davis, the publisher of the magazine. This time he asked the president of Ziff Davis for advice on which company Son should invest in, and the answer was a new start-up called Yahoo. That prompted Son to meet Yahoo founder Jerry Yang. The two men hit it off, and Son quickly decided to invest in the company.

This in turn led to relationship with a businessman "discovered" by Yang -- Jack Ma Yun, who would go on to found Chinese online retail giant Alibaba Group Holding. Yang met Ma when Yang, already a prominent businessman in Silicon Valley in the U.S., went on a tour of the Great Wall of China. Ma was brought in by the Chinese government as his guide. Son could feel Ma's unusual talent as soon as they met in late 1999. Legend has it that Son made the decision to invest in Alibaba five minutes after meeting Ma. Son later said he "felt charisma in his eyes." Both Son and Steve Jobs turned to Sasaki for advice.

Interestingly, Steve Jobs, the late co-founder of Apple who maintained friendly relationship with Son, also had respect for Sasaki. After he was ousted from the company he founded in 1985, he visited Sasaki at a Sharp office in Tokyo's Ichigaya district, without an appointment. He appeared with long hair and wearing jeans and explained that he had come to Sasaki for ideas.

It was after this that Son met Jobs in Silicon Valley, through introduction by Oracle founder Larry Ellison, another of Son's entrepreneur friends. Son, Jobs and Ellison talked about the future of information technology at Ellison's home. Son and Jobs, who sought advice from the same Japanese man, started to regard each other as respectable rivals.

Once Son recognizes an entrepreneur as a friend, that relationship always leads to encounters with other new friends and investments in emerging businesses. His feels that such a virtuous cycle of friendships cannot happen only through money-based connections based solely on the pursuit of investment returns. Friendship-based connections, in Son's words, are "assets that don't appear on a balance sheet."

Not all of Son's investments have been successful. When the IT industry bubble burst in 2000, SoftBank was hit hard, and its share price sank to a hundredth of what it had been. Son was forced to sell an investment that was originally worth about 500 billion yen.

"It was miserable. I had a big loss of confidence in myself," Son later recalled. "People who had approached me with all smiles now looked at me like I was a criminal."

Currently, as a result of a series of acquisitions, SoftBank's interest-bearing debt exceeded 14 trillion yen. The amount rivals the annual budgets for the Tokyo or Swedish governments. It has become difficult to increase borrowing.

But early last year Son started to wonder: Should he remain stagnant like this? Is there any way to continue to gain camaraderie connections without worrying about debt? The 10 trillion yen fund he set up with Saudi Arabia was his answer to that question. In the deal, SoftBank is investing about 3 trillion yen, of which 1 trillion yen is being funded by allocating part of its stake in ARM Holdings, which SofBank recently purchased.

With the fund, Son has access to a huge pool of money, whose size easily exceeds the annual investments of venture capital funds around the world. The fund is also included in SoftBank's consolidated accounts, meaning that its performance is now a key driver of the company's earnings. SoftBank has accepted a risk of a size that no other nonfinancial company has ever taken. Rocket Sasaki now lives in a care facility in Hyogo Prefecture. I visited him there last November, and he answered questions for an hour and a half. But at the advanced age of 101, Sasaki occasionally seemed to mix up his memories, making it difficult for us to make sense.

As I was about to leave, Sasaki took out a magazine. It was an issue of Nikkei Electronics that carried a feature on SoftBank's acquisition of ARM Holdings, with Son's photo on the cover.

Sasaki looked down on it and fell silent for a moment, and said: "It looks like Son-kun will continue his fight. Nothing has changed about him from those days."

There was a glitter of pride in his 101-year-old eyes for the fact that he had helped shape what Son is today. It appears Sasaki will not tire of watching Son, a man he described as an "offbeat guy" when he met him 39 years ago, and someone for whom he wouldn't mind being a stepping stone.