How Yahoo turned into a pumpkin

The simple explanation for Yahoo's downfall is that it was unable to compete with the likes of Google. But the company contributed to its own demise with three crucial mistakes.

At a Tokyo hotel on Monday, Yahoo co-founder Jerry Yang expressed deep regret over the way things turned out. He spoke in front of a photo of Masahiro Inoue, who died in an accident at a California classic car race in April. Inoue had spearheaded the creation of Yahoo Japan as a close aide to Masayoshi Son, the chairman and CEO of SoftBank Group. 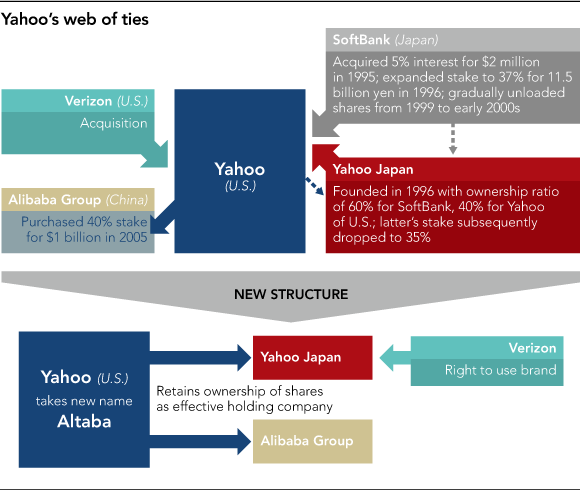 SoftBank is an integral part of the story of Yahoo and Yang. Son "discovered" Yahoo in 1995, when it had only five or six workers on its payroll. He visited the startup in Silicon Valley and was so impressed by its business plan that he immediately decided to invest. The idea, of course, was to create a gateway to the nascent internet -- and gain access to huge amounts of data.

Thus began Yahoo's Cinderella story. For his investment, Son estimated the startup's corporate value at $200 million. Critics said this was too high, but within several years, the company's value topped 100 billion.

Inoue was dispatched to Yahoo and quickly hit it off with Yang. In 1996, they brought Yahoo to Japan, where the brand soon became synonymous with the internet itself.

Yet, Son was worried. "I had one difference of opinion with Yang," Son recalled.

Yang insisted that Yahoo should judge the quality of websites with human eyes. This way, it would always be more than a mere search engine. When Google was founded in 1998, Yang decided to use the young company as a subcontractor.

Yang is said to have made it clear that he wanted Yahoo to remain "low tech." Son thought this was a "really bad" approach.

Yahoo introduced Google's search engine in 2000 but was rattled by its rapid growth -- so much so that Yahoo switched to its own engine. This is when the company began to go off the rails.

Yahoo "loaned Google space under the eaves and was robbed of the whole house," said Makoto Arima, who was the very first employee of Yahoo Japan and served as a representative of Google Japan later.

If that was Yahoo's first big mistake, the second was sticking to the search business and failing to adequately develop other revenue streams.

Son laments this, too. He sought to engineer a merger between Yahoo and U.S. online auction company eBay around 1999 and 2000. The companies signed a memorandum of understanding but failed to iron out their differences.

Son wanted to reinforce Yahoo's auction service. "Yahoo could have become much stronger if it had joined hands with eBay at that time," Son said, admitting the failure of the talks was a big setback for him.

But the aborted merger strengthened Son's resolve to win the auction game in Japan. When eBay entered the Japanese market in cooperation with NEC in 2000, he led Yahoo Japan's do-or-die resistance, declaring that its Yafuoku auction service would charge no fees until eBay retreated from Japan. EBay did just that a couple of years later.

Auctions help explain the different destinies of the American and Japanese Yahoos. The Japanese side has since developed Yafuoku into its biggest cash cow and diversified into shopping, financial services, travel reservations and e-books. As a result, its earnings are not as wedded to search advertising. 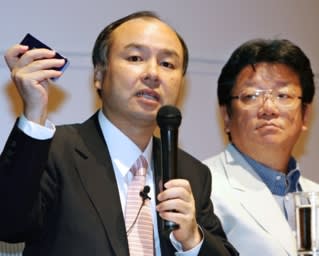 SoftBank Chairman and CEO Masayoshi Son, left, and the late Masahiro Inoue, a former president of Yahoo Japan, in 2006.

The third mistake began to unfold 10 years ago. Yahoo misread the shift in demand from PCs to smartphones, triggered by Apple's iPhone, and failed to adapt.

This time, Yahoo Japan was caught in the same trap. Inoue, who was president of the Japanese business at the time, openly said, "I keep my smartphone in my briefcase."

Internal tensions boiled over in October 2011.

Inoue was effectively the father of Yahoo Japan, and Son maintains to this day that the business "would not have achieved its success without him." But to enable the company to catch up with the times, Son made the call to sack Inoue.

"I've already decided," Son told Inoue when he informed him of the move.

Manabu Miyasaka, who was 44 at the time, replaced Inoue. Insisting on "explosive speed," he put the business back on a growth track. Murakami, who had sparked the coup, was rehired as chief mobile officer to lead the shift to smartphone services.

In the U.S., meanwhile, Yahoo continued charging toward the cliff. It turned down a buyout proposal from Microsoft and Yang was forced to resign as CEO.

Now that Yahoo's core has been sold to Verizon, the remnant of the company is taking a new name: Altaba. Basically, this will serve as a holding company for shares in Yahoo Japan and Chinese e-commerce giant Alibaba Group.

The relationship between Yang, who was born in Taiwan, and Alibaba dates back to 1997, when he visited China for the first time. Jack Ma Yun, Alibaba's founder, served as a guide for Yang on an excursion to the Great Wall outside Beijing.

Though Ma's earlier business endeavors had flopped, Yang recognized his abilities as an entrepreneur and maintained ties with him. In 2005, Yang invested in Alibaba.

The Chinese company has since grown into a powerhouse, Ma is a global star, and Yang's Yahoo is no more.