TAIPEI/SEOUL -- China's Huawei Technologies, the world's third largest smartphone maker, is planning to roll out the first foldable handset with a flexible screen ahead of its bigger rival Samsung Electronics, according to analysts and industry sources familiar with the matter.

The premium foldable smartphone will use a flexible organic lighting-emitting diode display manufactured by key homegrown panel supplier BOE Technology Group, according to those sources. The first batch could be very small but the idea is to beat Samsung to it.

"Huawei's planned volume could be limited to some 20,000 to 30,000 units, or even less, for a small group of first-wave adopters," one person familiar with Huawei's plan said. "The effort is mainly to demonstrate its technology capability and to attract the industry's attention and media coverage."

Its price and the market of launch are still unclear but Yuanta Investment Consulting analyst Jeff Pu said the product will hit the market by "very early 2019."

"The Chinese company wants to be the first in the industry even if the display technology from its panel supplier might not be that ready like Samsung," Pu said, citing his supply chain sources.

Another source said the launch date will depend on technology development and the durability of such panels, which still needs improvement. This move by Huawei and BOE to push ahead highlights China's ambition to demonstrate the ability of its homegrown display technology to lead the industry and to make a big marketing splash in a slowing smartphone market.

BOE, which is heavily subsidized by the government, is already the world's leading large-panel maker for TV screens. It is aggressively venturing into producing OLED displays, a market dominated by Samsung. Compared with the more mature display technology of liquid crystal displays -- used in most phones, PCs and TVs -- OLED displays have the advantage of being able to be molded into curved shapes.

Eric Chiou, an analyst at research company WitsView, said BOE hoped to prove to other clients such as Apple that it is capable of churning out advanced displays which would help the U.S. company cut its reliance on Samsung. "Profitability for this project is not the first priority for the two Chinese companies," said Chiou.

Samsung -- the world's No. 1 smartphone maker -- is also preparing to launch its own foldable smartphone to mark the 10th anniversary of its Galaxy models in the first half of 2019, according to media reports and industry sources.

Samsung's foldable smartphone would feature a 7.3-inch seamless display, said another source familiar with the matter. The folded product will be no thicker than an iPhone 8 or iPhone 8 Plus. "Under the durability test, it could be folded for 20,000 times and its price is likely between $1,500 and $2,000," he said.

Samsung told a small group of analysts that it plans to ship some three million units of such handsets in 2019 although most market watchers believe it could export around one million units at most. It's unclear which markets Samsung will launch the product in.

Apple bought OLED displays from Samsung for the first time for its 10th anniversary iPhone X in 2017 and is planning two iPhone models later this year with OLED screens. However, Apple has as yet no plans to roll out a foldable phone in 2019.

BOE made it onto the Apple's supplier list for the first time in 2018. The list discloses its major suppliers for the previous year during which BOE made LCD screens for MacBooks and iPads, but not for iPhones.

Samsung has said it plans to churn out 200 million flexible OLED displays this year, while BOE and LG Display are only able to make around five million sets this year, according to an industry source familiar with the matter.

BOE said its first flexible OLED manufacturing line in the southwestern Chinese city of Chengdu, Sichuan Province, went into production last year. Two other such production facilities are under construction in Mianyang and Chongqing cities, both also in Sichuan Province.

Despite Samsung's ambitions to reinvigorate its slowing mobile business with the cutting-edge display technology, a spokesperson told the Nikkei Asian Review that the company was "still concerned if the new foldable phone can really satisfy consumers and create enough demand for it to generate profits."

Huawei has become a formidable challenger for bigger rivals Samsung and Apple even as the global smartphone market slows significantly and marks its first year-over-year decline in 2017, said research company IDC. 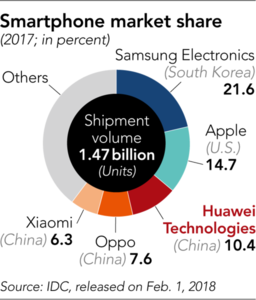 Huawei Consumer Electronics CEO Richard Yu said on July 18 during a phone conference in the southern Chinese city of Shenzhen that his company expects "to ship around 200 million units of smartphones this year" and is likely to replace Apple as the world's No. 2 smartphone maker by the end of 2018.

Yu said Huawei will keep accelerating its smartphone shipment growth in the next two to three years to achieve an annual shipment of 300 million to 400 million, becoming the world's No. 1 smartphone vendor.

Huawei, also the world's biggest telecom equipment maker, is caught in the escalating Washington-Beijing trade war, and faces setbacks in the U.S. market, but it has been able to unveil new technologies in recent years ahead of competitors thanks to its generous spending in research and development.

Huawei declined to comment, saying they do not discuss products that have not launched. BOE did not respond to the Nikkei Asian Review's requests for comments.