GUANGZHOU -- China's Huawei Technologies topped the smartphone shipment ranking in the country for the second straight quarter in the April-June period, while Apple fell a notch to fifth, according to U.S. research company International Data Corp.

IDC said Huawei's sales during the period grew 22.6% from a year previously to 23.5 million units. 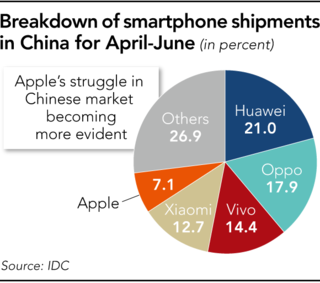 The second and third places were taken by Oppo and Vivo, respectively, both fast-emerging local brands. For the latest quarter, Oppo boosted shipments 11.3%, while Vivo's figure surged 9.3%, with both companies maintaining strong growth.

Apple was the only one among the top five manufacturers that saw shipments decline, with its share falling 2.1 percentage points to 7.1% from the previous quarter.

Huawei has maintained strong growth since mid-2016. That contrasts with the poor showing of Apple, which is being edged out by local players.

Huawei's measures to project a high-end image for its smartphones, including the introduction of cameras by Leica, the German high-end camera brand, while maintaining prices lower than Apple's, has helped it win over Chinese consumers.

The statistics revealed total smartphone shipments in China in the April-June quarter fell 0.7% from a year ago, but it also highlighted the divergence of performance between Apple and its local rivals.