NAGASAKI -- "Welcome to the future" might well be the greeting at a planned hotel at Huis Ten Bosch, where robots will greet guests, clean up and even serve coffee.

The operator of the Dutch-inspired theme park in Nagasaki Prefecture is not introducing the robots as a novelty, but, rather, as a way to slash personnel costs.

The hotel, whose Japanese name can be translated as "strange hotel," will achieve low construction and operating costs by tapping robot staff and renewable energy, according to plans released Tuesday. 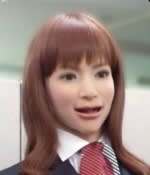 Robots like this will deal with guests at the front desk.

The hotel's first building, housing 72 rooms, will open in July. Another section, with the same capacity, will be ready early next year.

Automation will be used throughout the hotel, which will be powered in part by a photovoltaic system. It will also be equipped with three customer-service robots handling check-ins, at least one "service robot" tasked with serving coffee to customers and other duties, and several cleaning robots. Instead of room keys, guests will use a facial recognition system to enter.

The aim is drive down personnel and energy costs, a hotel's highest expenses, to a third of those at conventional hotels.

The new hotel will start taking online reservations next month, with rates set by Japan's first hotel room auction system. Prospective guests will bid in 1,000 yen increments within minimum and maximum prices designated by the hotel.

Huis Ten Bosch plans to build a similar hotel at group facility Laguna Ten Bosch in Aichi Prefecture by 2016 or 2017. The company wants to build 1,000 hotels in 10 years, chiefly in countries with emerging economies.

Container-style rooms can be easily brought overseas and quickly assembled on-site. And using solar cells and other forms of renewable energy, the hotel can operate even in an area with poor energy infrastructure.

"Soon the middle class of Asian countries will start going on overseas vacations, creating hotel shortages around the world," said Sawada, who is also chairman of travel agency H.I.S.