Will the Apple Watch send smart wear on a tear?

Apple CEO Tim Cook speaks during a launch event for the Apple Watch at the Flint Center in Cupertino, California, on Sept. 9.   © Reuters

TOKYO -- The Apple Watch is likely to intensify competition among global information technology companies in the emerging wearable tech market.

Many uncertainties remain: It is unclear how these products will evolve, or whether they will be widely accepted by consumers.

Key players are eager to try their hands at wearable tech, despite the risks. They cannot afford to let what may replace the smartphone as the next big thing pass them by. LG focuses on design and fashion aspects of its wearable devices.

Apple unveiled its first smartwatch in Cupertino, California, on Sept. 9. The venue was the Flint Center for the Performing Arts, where Apple took the wraps off its game-changing Macintosh computer decades before. Apple's decision to host the event here is indicative of how much importance the company places on the new watch.

CEO Tim Cook cut his teeth with the Apple Watch presentation, his first unveiling of a new product category since taking over from Steve Jobs in October 2011. The audience's responses were mixed.

"The Apple Watch has the most beautiful design among the wearables that have been unveiled so far," one audience member said. "The product has sent shockwaves through the watch industry," another added.

Others were not impressed. "There were few surprises," one said. "It is well within what we expected," another noted.  One critic even questioned if the product was really innovative: "The software may be just a follow-up of what the Google camp already released," he said.

One thing clear was that the excitement among the audience was nowhere near the level seen when Jobs introduced the iPhone or the iPad.

Apple aims to get the smartwatch to market early next year. Until then, comments on the device amount to little more than speculation based on Apple PR. But the announced features, such as linking with iPhones and monitoring user's exercise through its built-in sensors, are nothing new. These features have already been offered by existing wearable gadgets from Sony, Samsung Electronics and LG Electronics. 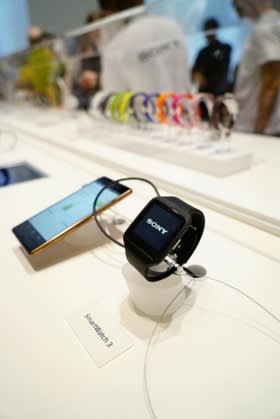 Sony's SmartWatch links up with its smartphones.

Sony's SmartWatch, which links up with some of its smartphones, has been on the market since April 2012. The LiveView, a predecessor to the SmartWatch, was launched in the winter of 2010. This model used Bluetooth to display information from cellphones on its screen.

Apple is likely to quickly catch up with rivals by leveraging its world-renowned product design and software development capabilities. A lot will depend on how WatchKit, the company's new platform for developers of apps for wearable devices, goes over. If developers can create unique, hit apps, the Apple Watch may pull far ahead of the field.

Rivals sought to pre-empt Apple's announcement. They showed off their latest devices at IFA 2014 in Berlin, Europe's biggest consumer electronics trade show, six days before the Apple Watch was unveiled. Having anticipated Apple's market entry, Sony, Samsung and LG clearly made efforts to protect their turfs by pursuing new directions.

Sony showed the public the SmartWatch 3 and the SmartBand Talk wristband at the show. Its improved Lifelog application, however, created the biggest stir for the Japanese company. Sony aims to make the app its biggest selling point and differentiating factor in the wearable tech market.

When these gadgets are used in conjunction with smartphones and Lifelog, the smart devices' various sensors record users' daily activities, such as how much they walked, ran and slept. The devices can even keep records of what videos and photos users viewed on their smartphones, as well as users' activities on social networks.

"We are focusing on developing ways to enrich people's lives," Hiroshi Ito, director of global product planning at Sony Mobile Communications, said. By enabling people to keep detailed records of their everyday lives, wearable devices "can help people look at the past and learn things that will help their lives tomorrow," Ito added.

Sony's business strategy for wearable devices is to pitch them as a tool to improve consumer well-being. The Lifelog application and related services allow users to analyze their daily lives. The company used the same concept for its Smart Tennis Sensor, which enables players to instantly analyze their game on smartphones.

"The wearable device market holds huge potential," Kazuo Hirai, president and CEO of Sony, said. "Some estimates suggest its scale will grow from $2 billion in 2014 to $20 billion in four years." Hirai is also cautious about intensifying competition in the market, which is already showing signs of overheating.

"We are starting to see excessive competition in all areas of the wearable market," he noted. "We are at the trial stage. We have no idea what products will be hits with customers."

Sony sees hardware-software integration as the key to the wearable tech business. Samsung is focusing on integrating its devices more deeply with other products at home.

The South Korean company set up a mock future home at its exhibition booth at IFA 2014. There, the Gear S, the company's latest wearable device, was used to demonstrate domestic life in the near future, showing what the smart device can do with advanced white goods.

The demonstrations included using the Gear S to turn on the lights through voice activation, as well as operating a robot vacuum cleaner and TV from the device. In a separate demonstration, the Gear S was used to check battery levels and door locks on German automaker BMW's i3 electric vehicle, even when away from the car.

Equipped with third-generation telecommunications functions, the Gear S does not need to link with a smartphone to handle telephone and data communications. The gadget uses an operating system called Tizen. Sony and LG wearable devices use Google's Android Wear operating system. The Gear S has other advanced technologies, including an organic light-emitting diode, or OLED, screen.

Samsung is spending big and acting fast to beat its main rival Apple and other competitors in wearable tech.

LG, meanwhile, is focusing on design and fashion aspects of its wearable devices, attempting to make its watches as attractive as conventional ones.

The company selected a round OLED display for its G Watch R, despite the difficulty of manufacturing the display in such a shape. LG's booth presented the devices in a similar way to how upmarket watch boutiques display theirs.

"The wearable device business is similar to the real estate business," Hirai said.

There is only limited space on the human body for wearable devices. So the areas on the body where gadgets can be worn are valuable real estate. "If you can secure prime property, you can develop a good business," the Sony president explained.

This means a large part of the wearable device business is about competition to secure limited body space. It is a zero-sum game, where businesses could stall if they lose prime space to a rival. Companies that secure space will likely be able to lead the age of the so-called Internet of things, in which more devices are connected.

Ignoring wearable tech is not an option for the IT market's biggest players. Doing so would mean giving up on the potentially great rewards that await this competition's victors.