BANGKOK -- The CEO-designate of Telstra, Australia's top telecommunications company, has vowed to speed up its international expansion. David Thodey, the current CEO, surprised investors when he announced his retirement on Feb. 20. 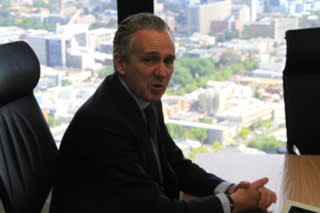 Andy Penn will soon take over as CEO of Telstra.   © Michael Sainsbury

Andy Penn, chief financial officer since 2012, was widely seen as a suitable successor to Thodey, despite his relatively limited industry experience. The former CEO of insurer AXA Asia Pacific Holdings said at a Feb. 23 media conference that he planned to take Telstra beyond its home market, and even beyond Asia.

"In the last 12 months, we have also made investments in Silicon Valley that will really lay the foundations for how we take Telstra forward," he said in Sydney.

A saturated and highly competitive domestic market means Telstra's only opportunity for substantial growth now lies in expanding overseas. At present, business outside Australia contributes 6% to revenue, if the recent acquisition of submarine cable operator Pacnet, based in Hong Kong and Singapore, is taken into account. Telstra aims to raise the amount to 20%.

Telstra last year announced that it had a 5 billion Australian dollar ($3.95 billion) war chest set aside for its Asian expansion. It intends to focus on delivering cloud-based information technology services to enterprise customers. It also formed a joint venture with Telekomunikasi Indonesia last year to offer managed software services to businesses in Southeast Asia's largest economy.

Apart from the $697 million acquisition of Pacnet, the company spent A$508 million on acquisitions in the first half of the 2015 financial year, which ends June 30, according to analyst Richard Eary at UBS. That includes its first foray into Silicon Valley -- buying a controlling stake in video-streaming company Ooyala for A$270 million.

Telstra's international strategy has flipped and flopped since the company's 1992 formation. State-owned Telecom Australia and Overseas Telecommunications merged to create the company.

In 2003, it wrote down the carrying value of Reach, the undersea cable joint venture with Hong Kong's Pacific Century Cyberworks, by A$965 million to zero.

During his tenure, Thodey, 60, also led a group turnaround. Telstra's share price has doubled over the last seven years. He is the first Telstra chief since Frank Blount in 1999 to choose the time of his departure. His decision was unexpected.

Catherine Livingstone, Telstra's chairman, described Thodey as an "outstanding" CEO. "It is testament to David Thodey that we were able to select the next CEO from within the business," she said. Thodey will step down in May.

Thodey's main legacy is that he restored the company's battered brand and its relationship with the Australian government. Things had soured between the company and government under his American predecessor, Sol Trujillo. Criticized by ministers and company insiders as divisive and dismissive, Trujillo presided over a 50% collapse in the group's valuation.

The outgoing CEO also in December concluded drawn-out negotiations over the progressive, A$11 billion sale of the company's fixed-line infrastructure to the Australian government. It took seven years to finalize that deal, which ends Telstra's monopoly over a national "last-mile" network. Decades as a national company had left it with the monopoly.

"We want to work with the government to build out the network it wants to provide," Penn told the Nikkei Asian Review at Telstra's headquarters in late 2013. "The bottom line is we have moved on."

Telstra's first-half net profit was up 22% to A$2.1 billion from the same period a year earlier, the company said Feb. 12. Mobile revenues rose 9% over that period.

In Australia, revenues in the telecoms market are expected to reach about $40 billion in 2015, according to Andrew Levy, head of Telecoms & Gaming Research at Macquarie Securities. He said the sale of fixed-line assets will see Telstra's domestic business suffer relative to its rivals.

Some analysts believe the stock is now overvalued after it reached a fresh 14-year high of A$6.74 on Feb. 4. UBS has a "sell" rating on the stock and a target price of A$4.60. "We believe [Telstra] looks expensive especially against global peers," the company wrote in a recent research note.

Other analysts see an opportunity for further upside. For some years, the international base of Telstra shareholders has remained steady at around the 22% mark, according to Morgan Stanley. They noted in a recent client note that its increasingly attractive yields will underpin its current valuation and attract more offshore investors.

Whichever way the market turns, Penn is taking over the company at a time when it is in great shape to grow globally. Many commentators in Australia believe the game is now Penn's to lose.