India's IT companies must look for new growth drivers

Emerging technologies, Asian markets can offset pressure on US revenues

Indian IT companies need to look beyond Europe and America, which are increasingly turning protectionist, to maintain growth momentum.   © Reuters
CopyCopied

India's information technology companies are facing unprecedented challenges from narrowing profit margins and U.S. President Donald Trump's restrictive immigration policies. To survive in this new world, they should look at business areas such as cloud computing, robotics, artificial intelligence, data analytics, and augmented reality, and at serving industries other than the financial services and telecommunications clients on which they are focused.

India's IT titans are not doing so well, however. In dollar terms, the revenues of the top three companies -- Tata Consultancy Services, Wipro and Infosys -- grew annually by more than 20% until the year ended March 2011, but the pace has since slowed to single digits. Hiring has also eased. In the nine months to December, Infosys for example added fewer than 6,000 employees compared with 17,000 in the same period a year earlier.

The Trump administration's anti-globalization focus is problematic too, given Indian IT companies' dependence on exports to the U.S. More than 60% of their revenues now come from American customers. A proposal to hike the minimum required salary for overseas professionals entering the U.S. on working visas from $60,000 to $100,000 could raise costs and further squeeze the margins of Indian IT companies.

The companies are also over-reliant on a limited number of business sectors, such as banking, financial services, insurance and telecoms, which together account for half of their revenue, on average. More than three-quarters of the export revenues of Indian IT companies comes from IT services and support and business process outsourcing.

Most of the IT services that India supplies caters to the lower end of the $900 billion global IT market, largely in ways that exploit the relatively low wages of Indian staff. Top Indian companies are poor at high-value strategy consulting, which is dominated by American and European companies such as Accenture, IBM and Oracle. Indian IT companies have not invested much in developing their own proprietary software, unlike companies such as Microsoft and Oracle, and hence do not have much pricing power. Worse, they have not been able to exploit rapidly growing digital opportunities fully.

Indian companies, unlike their American and European counterparts, have been slow to acquire smaller companies with niche skills that would have provided them with more competitive advantages. For instance, Accenture has acquired at least 10 companies since 2013, including advertising agency Karmarama and digital solutions provider SinnerSchrader, to increase its digital footprint. By contrast, Tata Consultancy acquired a French company called Alti that mostly caters to banking, financial services and insurance, segments in which Tata was already well-entrenched.

Indeed, Indian IT companies are uncomfortable outside their comfort zones. Guided by short-term stock market considerations, they have neglected to invest in new-age disruptive technologies, and spend an average 0.5%-1% of their revenues on research and development, compared with 2% or so by companies such as Accenture.

Any tightening of America's skilled-worker visa program could create further problems for the Indian IT sector as Trump pushes companies to hire locals. Issuance of so-called H1B skilled-worker visas is now capped at 85,000 each year, with 70% usually going to Indians, according to the U.S. Citizenship and Immigration Service.

Indian IT companies, according to the National Foundation for American Policy, are reporting a high rate of rejection for applications for L1B visas, which are used for employee transfers. Applications for visa extensions are encountering delays, resulting in project delays and cost overruns.

Still, all is not bleak in the U.S. for Indian IT companies. A 2013 study by the Brookings Institution, a U.S. research group, showed that H1B visa holders received salaries 12% higher than American workers with comparable qualifications and experience. This will cushion the impact of the proposed increase in minimum wage requirements because hiring more locals may not necessarily mean paying higher wages.

Indian IT companies can comply with Trump's instruction to hire Americans by setting up delivery centers in southern and Midwestern states where the overall cost of operation is likely to be lower than in more traditional sites. They can also reduce the role of U.S.-based staff in international projects and cut costs by pruning bloated middle-management ranks.

Some critics have argued that Indian tech companies will not be able to hire sufficient local staff in the U.S. because America produces too few science, technology, engineering and math graduates to fill existing demand. However, as Vineet Nayar, former CEO of HCL Technologies, has pointed out, Indian companies train thousands of local non-technology graduates to do coding in as little as 90 days in India; this could be done in America, too. Having more local hires would assist the creation of a more multicultural workplace environment, which some researchers argue can raise productivity and aid innovation.

Just as importantly, Indian IT companies must future-proof their businesses by moving up the value chain through innovation and quality offerings. This calls for increased spending on R&D and investment in upcoming areas such as automation or robotics, perhaps through mergers and acquisitions that so far have been a low priority. This would mean being open to lower profit margins.

At the same time, Indian IT companies need to increase their focus on non-traditional markets in the Asia-Pacific region, in particular China, Japan and South Korea. The domestic IT market can be another option to fall back on; the Indian government's transformation initiatives such as increasing the role of digital payments and introducing a nationwide goods and services tax should provide ample opportunities for IT companies.

The tightening U.S. visa regime remains a serious external risk to the sales and profitability of India's IT majors. But IT companies also need to fix internal issues such as their neglect of investment in futuristic technologies. Moreover, they need to look beyond Europe and America, which are increasingly turning protectionist, to maintain growth momentum. 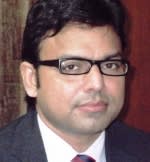 Ritesh Kumar Singh is a corporate economist and former assistant director of the Finance Commission of India.