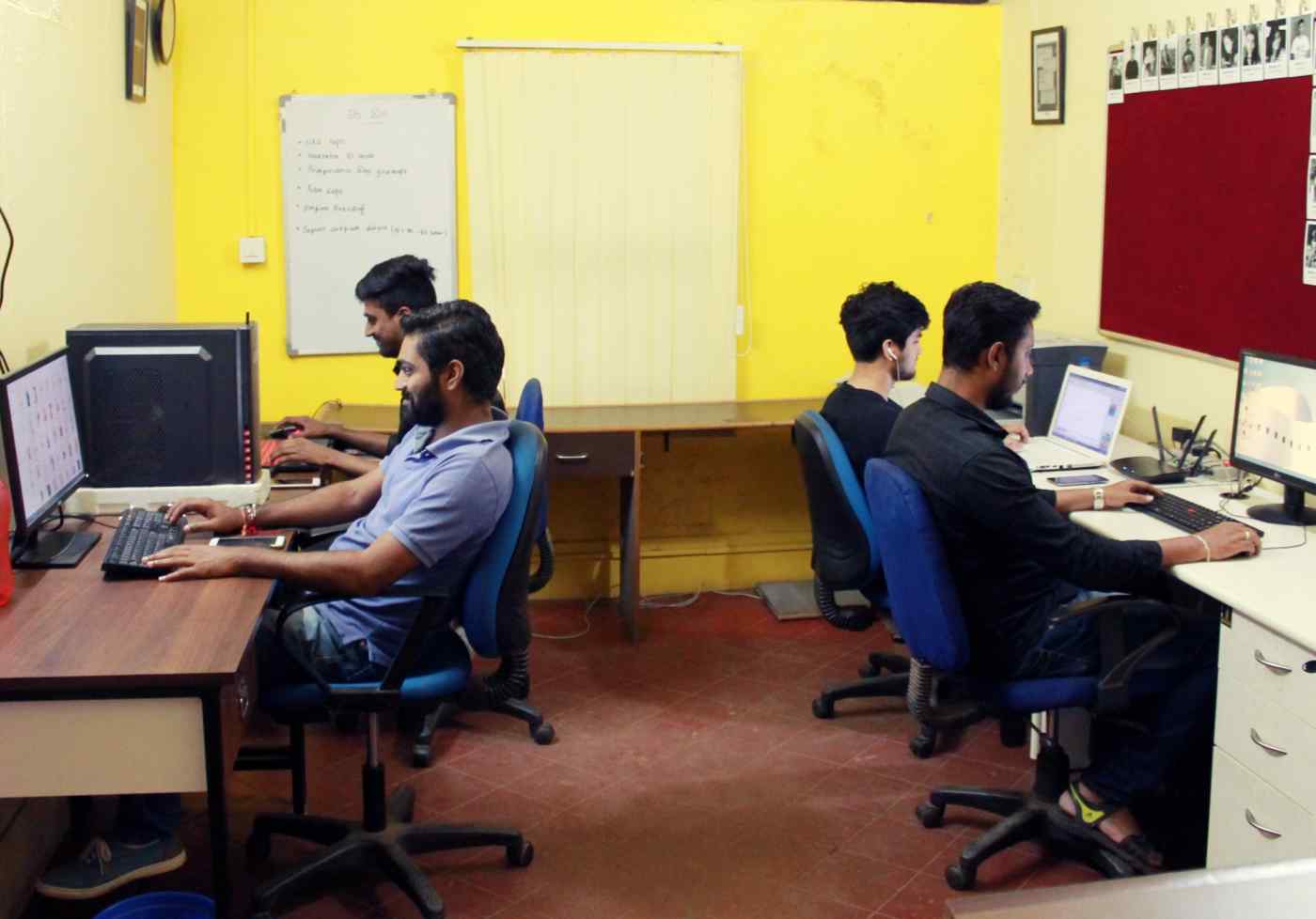 Staff at Merako Media, a media, marketing and design startup based in Mysore, a city with a population of less than 1 million people about 110km from Bangalore (Photo by 101Reporters.com)
KAVITA PATIL, Contributing WriterSeptember 27, 2017 14:00 JST | India
CopyCopied

BANGALORE -- After struggling to find affordable office space in Mumbai, India's financial hub, Sarabdeep Singh decided to move his startup company more than 1,500km north to Mohali, a town with a population of 176,000 in the state of Punjab.

Singh, co-founder of Bodhik, a financial technology company, had been operating from shared office space, which proved inadequate when his team expanded. An office for eight to 10 employees in Mohali costs about 15,000 rupees ($231) to 20,000 rupees a month, including utilities, compared with more than 50,000 rupees excluding utilities in Mumbai, he said.

New Delhi, the information technology hub of Bangalore, and Mumbai collectively host the largest share of both startups and investors, but entrepreneurs such as Singh are increasingly choosing smaller cities to kick-start new ventures.

"The cost of hiring a software developer is at least 40% lower in Mohali compared to Mumbai," he said. "A fresher [new employee] costs us about 15,000 to 20,000 rupees per month. In Mumbai, it's very difficult to find someone at this salary because of the high cost of living, and competition."

Singh said that his personal expenses have also fallen since Bodhik relocated to Mohali, in part because he now spends just five minutes commuting to his office compared with a two-hour journey in Mumbai. Working out of a small town is preferable so long as companies' required skill sets are not too specialized, he said.

Tarun Singh Uppal, co-founder of Vnaya, a provider of online tutorials and parenting support that launched in Mohali in 2012, agreed. "The infrastructure cost and living cost is about 30-40% cheaper than that of the national capital region [New Delhi] or any big city. It wasn't possible for us to start in a tier-1 city," he said.

In addition to lower costs, startups have found new markets in smaller cities and towns because of relatively light local competition.

Vishwas Shringi, CEO and co-founder of Voylla, a jewelry retailer, launched in 2012 in Bangalore, population 11 million, but moved its headquarters to Jaipur, a hub for skilled artisans with about 3.5 million people, two years later. The startup, with more than 1,000 employees, has an online store and more than 200 retail locations across India.

"The infrastructure here is geared towards crafts and textiles," Shringi said, adding that it made sense to relocate to Jaipur because his company wanted to put design and production under the same roof.

Other second-tier and smaller cities in India have also seen a notable increase in startups. Chandigarh in the north recorded the incorporation of just 16 new startups in 2012, according to Tracxn, a Bangalore-based data-research company. But the annual total gradually reached a peak of 120 in 2015, with another 50 in 2016 giving a five-year total of 277. Kochi, a port city in the southern state of Kerala, was home to 297 startups over the same period, Indore in central Madhya Pradesh State recorded 265, and there were 200 in Surat, Gujarat State.

Manish Agarwal, founder of online pharmacy HealthPotli in Raipur, the capital of Chhattisgarh State, said that "being a resident here and knowing the city well, we feel Raipur has the potential to validate our business model." He added that he also found it easier and cheaper to hire staff locally.

Vivek Kejriwal, co-founder and CEO of One Way Cab, a taxi services provider, said it was a strategic decision to have a "smaller bite to chew on initially" by launching in Vadodara, a city in Gujarat of roughly 1.6 million, in 2011.

"It would have taken more resources and time to make a similar mark in Mumbai or Pune (a large city in Maharashtra State)," Kejriwal said. "Using Vadodara as a springboard, we require less effort to repeat the brand's success in Pune."

People in smaller cities are high on commitment and eager to learn and advance in their careers, Kejriwal said, adding that it is easier to test a business model and build infrastructure where employee costs are relatively low.

Merako Media, a communications and marketing company, is based in Mysore rather than Bangalore, which is just 140km away, because of lower operating costs, said CEO Nikhil Furtad. He also said the quality of life is better in Mysore, which is less polluted than Bangalore.

Another draw, according to Furtado, is that Bangalore is intensely competitive, while Mysore is short of creative agencies. Mysore is also his hometown, and the location of his early entrepreneurial activities.

Ketan Sharma, founder of iNVERTEDi, a startup developing enterprise apps, chose to base his firm in his hometown of Chandigarh, although New Delhi is just 250km away.

But for all the advantages that operating on home ground offers, separation from the major startup hubs has its limitations. As the Federation of Indian Chambers of Commerce and Industry said in a February report, "almost all of the accelerators [investors in startups] are located in the main cities."

The federation's report on startup trends noted that companies in tier-1 cities typically receive bigger and quicker funding, with an average deal size 62% higher than that of companies in tier-2 cities. The report studied the profiles of angel investors listed with LetsVenture, an online-funding platform, and found that 88% were based in New Delhi, Mumbai and Bangalore.

"There exists a big gulf in investment flow between startups in tier-1 cities and the other two tiers," the report noted. Between 2005 and 2015, firms in third-tier cities received only 2% of all investment, while second-tier cities took 31% of investments.

Apart from funding, retaining staff is the biggest challenge that entrepreneurs face. Furtado said he has been fortunate to hire experienced people who have returned to Mysore to live with their families, but noted that quality talent tends to migrate to big cities for better opportunities.

Sharma said most people don't want to stay at his company for more than two or three years. After gaining experience, they move to bigger cities for better opportunities and higher pay.

State governments are trying to address these drawbacks by encouraging the dispersal of startups. For instance, the Karnataka State government has sought to expand incubation programs at engineering colleges to all professional and post-graduate institutions in tier-2 cities.

Golden Jubilee Biotech Park, an incubator backed by the federal government and the state government of Tamil Nadu, promotes startups in smaller cities. Sudha Nair, its CEO, said infrastructure in these small cities is improving.

"Instead of creating more job opportunities and congestion in big cities, it's better we move to tier-2 cities," she said. That is why, she added, the government is helping startups in small towns with subsidies and guidance.

These efforts are having an impact. The National Association of Software and Services Companies, a trade association, has reported that second- and third-tier cities are gaining traction, snaring 66% of all new incubators in the country last year.

Low operating costs and market opportunities in smaller cities are helping hundreds of startups in India to flourish without funding. The trend is undermining the industry notion that startups can succeed only if they are funded.