BANGALORE, India   Startups in India are flourishing, and not just in terms of numbers. New ventures are coming up with a dizzying array of innovative products and services unavailable even in advanced economies

This burst of entrepreneurial creativity is fueled by the numerous problems unique to a developing country with a population of nearly 1.3 billion people. Cutting-edge technologies, such as smartphones, artificial intelligence and big data, are finding capital aplenty and more than enough problems to solve. As a result, startups are bringing seismic change to Indian society -- but not without some growing pains. 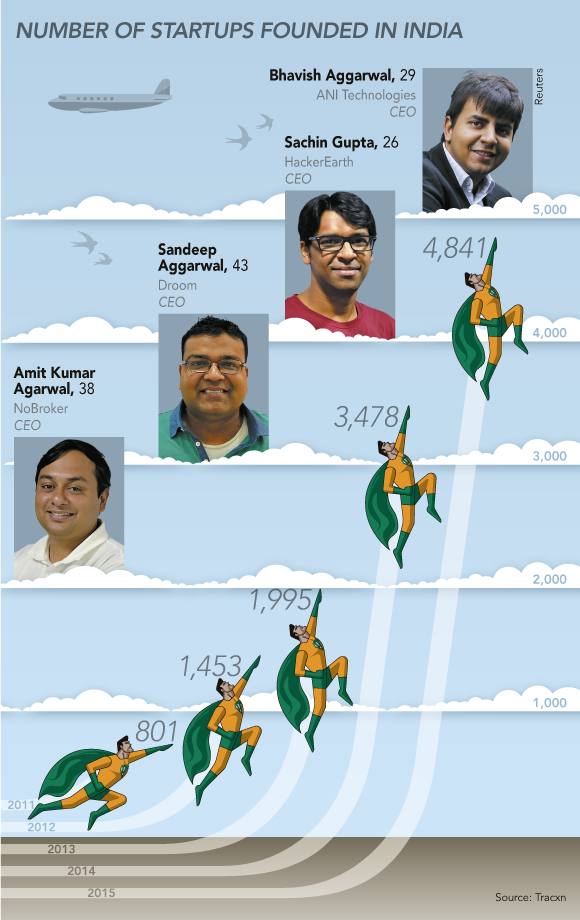 Disruption may be a buzzword in the West, but in India, it can be downright dangerous.

NoBroker, an online real estate startup, has its office within a 30-minute drive from the center of Bangalore, in southern India. The company has neither a sign on its office nor an address on its website.

"The company hides the address of the office because its old office in another location in the city was attacked by a mob of property brokers," Amit Kumar Agarwal, NoBroker's CEO, explained.

India's real estate market is known as a brokers' paradise. Looking to change that, NoBroker launched a website in March 2014 to connect house owners and tenants directly -- no middleman needed. Prospective tenants can contact to up to 10 homeowners listed on the website for free, and up to 25 owners for 999 rupees ($14.50). The service costs nothing for homeowners looking to let.

In India's property market, homeowners and tenants are at a disadvantage. When a tenant rents a room, say, for 10,000 rupees per month, he or she and the owner each pay the broker a commission equal to one month's rent and the same amount to renew the lease every 11 months.

"The business practice has been a hotbed of malignant brokers, and tenants often end up in rooms much inferior to what they were promised," Agarwal said.

Despite the attack on its previous office, NoBroker has grown apace. The company now has a total of 200,000 listings for rooms in Mumbai and three other cities and concludes around 100 lease contracts a day. It plans to expand the service to 20 cities within a few years.

INGENIOUS UNICORNS   More than 4,800 startups were founded in India in 2015, the highest number ever, according to a survey by Indian research company Tracxn.

Attracted by India's huge market potential and intrigued by local entrepreneurs' innovative business models, investors around the globe poured an estimated $6.5 billion into Indian startups in 2015, a threefold increase over the previous year, according to India's National Association of Software and Services Companies.

One result of this investment flood has been a proliferation of "unicorns," unlisted startups with valuations of $1 billion or more. E-commerce site operators Flipkart and Snapdeal are valued at $15 billion and $6.5 billion, respectively, while the market value of Ola Cabs, an online cab dispatcher, has grown to $5 billion.

In addition to massive valuations, all three have something else in common: They turned consumers' problems into opportunities.

To address the country's underdeveloped banking infrastructure, for instance, Flipkart and Snapdeal have created account-settlement and distribution systems that enable consumers without bank accounts or credit cards to shop online

The Ola Cabs service by ANI Technologies, meanwhile, addresses transportation issues. In rural areas, vehicle ownership is almost nonexistent, and rail and bus networks are inadequate. ANI Technologies was founded in 2010 to address this deficiency, and already offers its cab-booking service in 102 cities across the country. It has 350,000 vehicles registered on its platform, giving it control of almost 80% of India's taxi-hailing market. This leaves its U.S. competitor, Uber Technologies, in the dust.

In addition to online booking, another unique aspect of ANI is the priority it places on supporting its cab drivers. For instance, the company has tied up with financial institutions and automakers to make it easier for drivers to borrow money to buy their vehicles or lease a car at low cost. Additionally, for drivers who do not speak English, ANI provides them with smartphones compatible with nine Indian languages.The company also introduced an educational support system for drivers. These moves have led to more applications from prospective drivers living in rural areas.

"The [taxi] industry has to work on the issue of safety of the passengers," ANI Technologies CEO Bhavish Aggarwal, 29, said. "Companies need to weed out drivers who don't drive well or have got poor ratings from customers. Trust and safety are keys for our industry. We have to keep improving tech, design and compliance." 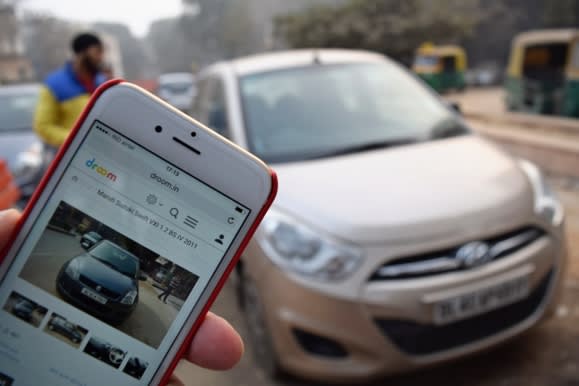 DODGING LEMONS   Droom started an online marketplace for used cars in April 2014. When prospective buyers find a car that catches their fancy, they place a down payment equivalent to 2% of the price of the vehicle and pay the rest after checking it out at the dealership.

The idea itself is simple, but what takes Droom's system to the next level is the protection it offers consumers. For example, the company has developed an algorithm to calculate appropriate prices of used cars based on model, date of production and miles driven. The algorithm also scores the trustworthiness of dealers based on the number of photos and vehicle descriptions and on past buyers' evaluations.

"In the Indian used car market, 85% of dealers are not institutional, and they often rewind odometer readings and overcharge customers," said Droom CEO Sandeep Aggarwal.

India is still struggling to provide the level of consumer protection taken for granted in advanced economies. For businesses like Droom, there is money to be made in creating new ways to keep both buyers and sellers safe.

In less than two years since Droom began the service,  the company has seen its monthly transaction value soar to $7.5 million.

Dealers are primarily reliant on walk-in customers, and many are keen to join Droom to expand their sales routes. Rudi Marek, who operates a used car dealership on the outskirts of Delhi, said "Sales have grown 25% on an increase in visitors from afar."

HackerEarth, based in Bangalore, has a more niche business model: protecting companies from resume fraud by assessing applicants' IT engineering skills. The company offers its services to 2,500 clients.

"Resume fraud is committed by 10% to 15% of job applicants," said Sachin Gupta, the 26-year-old CEO of HackerEarth.

To measure applicants' skills, HackerEarth asks them questions -- "Show the shortest route from point A to point B on the Google Map," for example -- and evaluates the methods and time taken for them to draw their conclusions.

Job offers for IT engineers in India increased 45% in 2015 from the previous year, according to staffing agency JAC Recruitment, a sign that competition for competent workers is likely to heat up.

"Demand for the prevention of mistakes in hiring workers will surely grow stronger," Gupta said.

ROOM TO IMPROVE   India came 130th out of 189 countries in the 2016 business environment rankings compiled by the World Bank. It is the lowest among the four Brics countries, which also include Brazil, Russia and China.

The World Bank's rankings are based on 10 categories, including ease of launching new businesses and availability of electricity. Though ranked 8th in protection of investors and 42nd in fundraising, India stands at 178th in the category of legal costs and time needed to settle breaches of contract.

In India, it takes about four years to settle lawsuits involving business contracts, 10 times as long as in Singapore. And when there is a settlement or compensation in Indian cases, a large portion of the money goes to the lawyer or lawyers.

This inefficiency in legal proceedings makes many individuals and companies reluctant to go to court, which only makes breaches of contract more common.

The Indian government held its first event for startups in mid-January. Prime Minister Narendra Modi called for entrepreneurs and investors, who had gathered there from across India and abroad, to work together to overcome such problems and help create more jobs.

"Those who found startups, the biggest thing they have is compassion. When they see a problem, they cannot ignore it," Modi said. "Startups don't always mean a billion-dollar company. If I can create jobs for five people, then that means I am helping someone. Youth can become job creators."

The government launched the "Startup India" campaign to support new businesses in hopes they will further invigorate the economy. The campaign includes the planned creation of a 100 billion rupee fund for investing in startups and the introduction of preferential measures for new ventures, such as corporate tax exemptions in their first three years.

U.S. companies have been setting up centers for offshore development and research and development programs in India since the 1990s, generating a large number of engineers and other personnel fluent in English.

This laid the groundwork for India's startup ecosystem, which has flourished recently thanks to the growing number of Indian businesspeople heading top American IT companies, including Microsoft and Google.

STRONG FOUNDATION   The overall strength of the Indian economy is another reason for the rapid growth of startups. The International Monetary Fund estimates that India's gross domestic product grew 7.3% in 2015 and will continue growing in the mid-to-high 7% range between 2016 and 2020. This contrasts with China's slowdown to the 6% level.

India is also expected to top China in population. With an average age of 26.6, India will continue to reap the "population dividend," when the ratio of the working-age population rises, until 2045.

Poverty and promise, obstacles and opportunities, innovation and inefficiency. India's contradictions, it seems, have ushered in a golden age of startups.