India takes a ride with e-rickshaws

Electric vehicles could be a solution for India's crowded, chaotic roads MUMBAI/NEW DELHI -- With many global automakers pressing ahead with fuel-saving, low-polluting electric cars, India is taking a niche route that may be more suited to its own market -- electric rickshaws.

Popularly known as the "Toto," an e-rickshaw is a three-wheeled form of public transport that can carry up to five passengers and a driver. It is a cheap, low-emission way to get around in a country with a crowded, chaotic road system and a population of 1.3 billion.

Over the last couple of years, thousands of e-rickshaws have been running alongside traditional public transport, such as regular three-wheelers, buses and pedal rickshaws.

"People here love the Toto. We give them door-to-door service and ply routes where traditional public transport doesn't," said 32-year-old Michael, who has been driving an e-rickshaw in a town near the sprawling eastern city of Kolkata for two years. It is a good opportunity for the school dropout, who can earn an average of 500 rupees ($7.70) per day after spending 50 rupees to charge the batteries. Small towns around Kolkata are increasingly adopting e-rickshaws.

Currently, e-rickshaws are manufactured by local, lesser-known companies. While the vehicles seem around to stay, drivers complain they are not sturdy enough.

Yet one major Indian manufacturer is coming into the market. In early September, the country's leading vehicle manufacturer Mahindra & Mahindra announced the launch of its e-Alfa Mini, a zero-emission e-rickshaw designed specifically for Indian conditions, at a price of 112,000 rupees.

"At Mahindra, we are aligned to the government's vision to become a 100% EV nation by 2030," said Rajan Wadhera, president of the company's automotive division.

Mahindra will start by manufacturing 1,000 e-rickshaws per month at its plant in the northern city of Haridwar. It is set to gain from government tenders for 25,000 electric rickshaws and an equal number of electric cars. The vehicles are slated to be deployed for public transport next year. 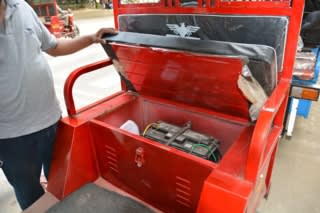 E-rickshaws are fitted with batteries in a box under one of their seats. (Photo by Kiran Sharma)

Pinki Gurung, another resident of the town near Kolkata, has made e-rickshaws her main form of private transport, booking them whenever her family visits relatives.

"It is very comfortable for five people and is cheaper than normal auto rickshaws," she says. "It feels personal and we can hire it for as long as we want and not worry about a rising bill."

As the government looks to reduce its crude-oil import bill and rein in pollution to meet the Paris climate accord, it recognizes the need for changes to public transport in smaller towns, including the introduction of e-rickshaws.

India imports over 80% of its crude-oil requirements, a figure that is projected to double to around $300 billion by 2030. Adapting to electric vehicles could make a big dent in that.

The U.K.-based accounting firm Grant Thornton reckons "a major thrust" by the government is needed to sell 6 million electric vehicles by 2020 as a step to meeting the Paris climate goal by 2030.

The stories of Michael and Gurung are being replicated across major cities such as Nagpur in western India and Jaipur in the north. In May, road and highways minister Nitin Gadkari, and chief minister of Maharashtra, Devendra Fadnavis, launched India's first multi-modal electric-vehicle project at the airport complex in Nagpur city.

The project brought together e-buses, e-cabs and e-rickshaws onto a single booking platform, the Ola app. The fleet of 200 vehicles consisted of 100 Mahindra & Mahindra's e20 Plus cars, with the rest from manufacturers such as Tata Motors, Kinetic and TVS. E-rickshaws line up outside a college in New Delhi to pick up students after classes. (Photo by Kiran Sharma)

"Even if the government succeeds in replacing 50% of public transport with electric vehicles, it is going to be huge," said Anil Sharma, principal auto analyst at IHS Markit.

While e-public transport has yet to catch up in the bigger cities, the capital, Delhi, is leading the way. New Delhi-based Mool Chand says he is happy he quit his job to be an e-rickshaw driver. (photo by Kiran Sharma)

Mool Chand, 42, a New Delhi-based e-rickshaw driver, earns around 20,000 rupees ($307) a month, almost double what he earned as a contract government employee for 11 years.

He bought an e-rickshaw with his savings of 110,000 rupees, less than half the price of a traditional three-wheeler.

Fully charging an e-rickshaw takes eight to nine hours, Chand says, after which it can travel 80-90 kilometers at a top speed of 20 kph.

Big companies coming on board In April, the taxi-hailing service Ola added e-rickshaws to its options for those living in Delhi and nearby. Prime Minister Narendra Modi booked his first e-rickshaw ride using Ola as part of his Stand-Up India campaign to spur enterprise among women and less-advantaged members of society.

Ola is backed by the Japanese telecom giant SoftBank, and has invested 500 million rupees in its e-vehicle project, including battery-charging infrastructure.

The company's sales in the domestic market have not been encouraging, prompting it to seek opportunities in markets such as the U.S. and Europe.

Other players, such as Tata Motors and Ashok Leyland, have been investing in electric buses. There have also been early moves in the passenger-car segment.

Tata Motors' British arm, Jaguar Land Rover, recently announced that all its new models from 2020 would be either hybrid or completely electric. Battery-powered car maker Tesla is seeking duty exemptions in India to sell its marquee cars.

"As for electric vehicles for private use, the price gap between traditional fuel cars and electric cars is still huge, hence the consumer incentive to buy them is still low," said Sharma from IHS Markit.

"The hassle of swapping batteries every few kilometers needs to be addressed if we will make electric vehicles popular," he said. But seeing electric public vehicles on the roads could encourage buyers, he added.

In 2015, the government announced the Faster Adoption and Manufacturing of Hybrid and Electric Vehicles plan to encourage manufacturers of the alternative fuel technology. The plan did not seem to gain much momentum, however.

According to the Society of Manufacturers of Electric Vehicles, 22,000 units were sold in India during the year ended March 2016. Of those, only 2,000 were four-wheelers, a tiny fraction of the 3 million passenger cars sold. According to International Energy Agency, the share of electric vehicles in the Indian car market is only 0.02 percent, much lower than in other markets.

China, on the other hand, is a world leader, with over 50% of the global market share. It spends heavily to subsidize local companies and push them to the forefront of electric mobility technologies.

In India, where even basic electrical supply is patchy and charging infrastructure minimal, more investment is essential.

The cost of batteries -- an electric vehicle's largest component -- and of the electricity for charging them, are the biggest challenges, Grant Thornton notes.

"While this does present a challenge to set up a viable battery manufacturing plant in India, it also means that companies must look for other options to power such vehicles," Grant Thornton said.

"Another challenge is electricity generation for batteries ... The plan should consider renewable options over fossil-based options, ensuring the dream of an all-electric passenger vehicles fleet is realized with minimal carbon footprint."

Chinese battery makers have the top shares in the global battery market, with other producers such as Japanese electric motor makers in competition.

In India, the lack of public awareness and adequate technologies could hamper the growth of the electric vehicle market, despite the country's efforts to be competitive and do its share to meet international environmental  commitments.