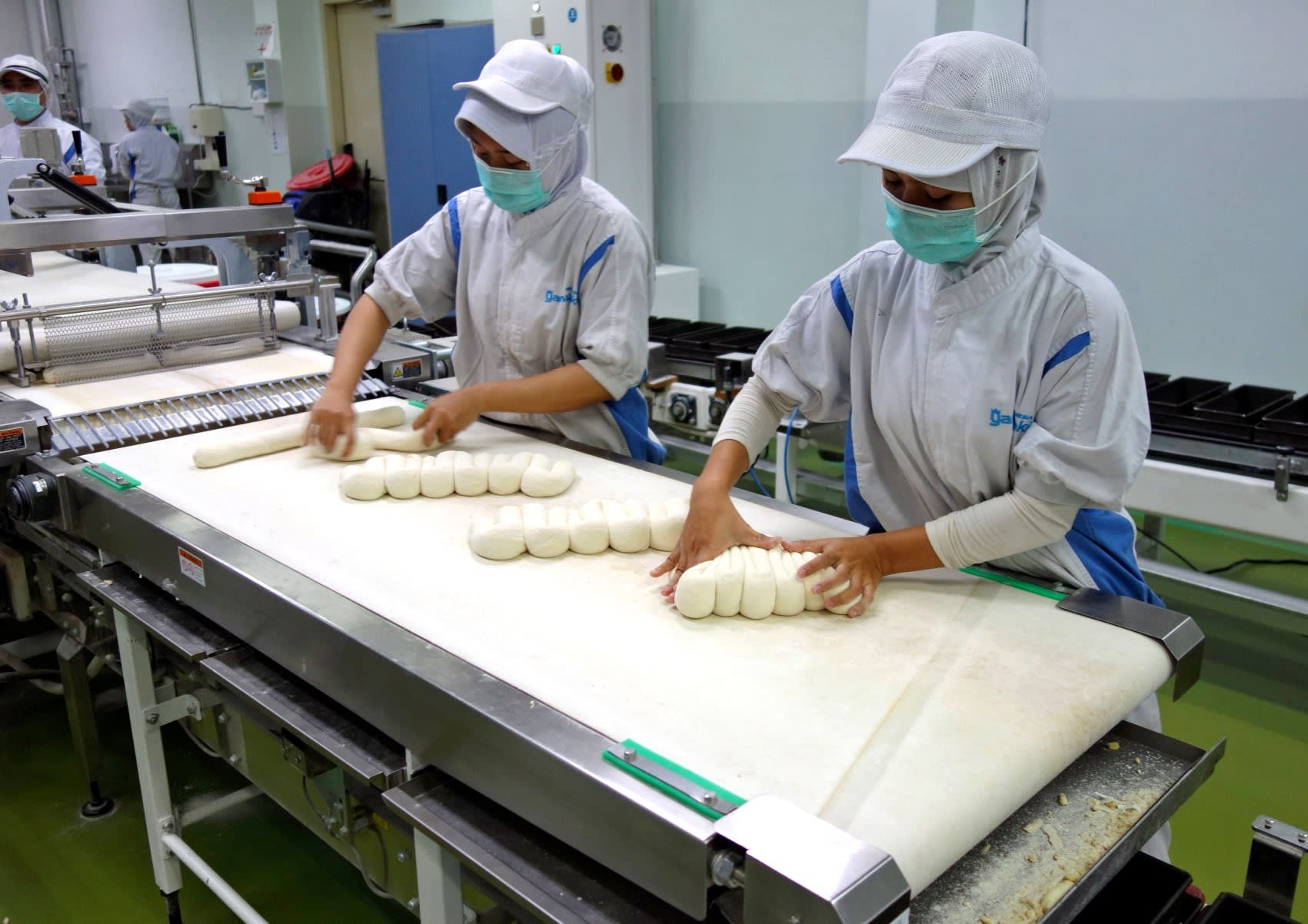 The trading company has asked Japanese food and daily goods makers to build factories in the world's fourth-most populous nation. It now supplies ingredients to these factories. It also markets the factories' output via major retail chains in the country.

At home, Mitsubishi owns the Lawson convenience chain and is building a vertically integrated business structure that yields a profit at every stage. Now it is transferring this model to the emerging world's burgeoning populations.

At a factory in Bekasi Regency, about 40km east of Jakarta, workers quickly put slices of chocolate into lumps of bread dough. Every day, the bakery churns out 23 kinds of breads and pastries. It is run by a joint venture between Japan's Yamazaki Baking, Mitsubishi and Alfa Group, Indonesia's largest food distributor. It opened in 2014 after Mitsubishi invited Yamazaki to Indonesia in 2011.

Alfa Group, which began cooperating with Mitsubishi in 2011, operates 13,000 Alfamart convenience stores in Indonesia. Yamazaki ships bread products to 5,200 Alfamarts within 170km of the factory. Flour comes from a factory run by Sriboga, a major flour producer in Indonesia in which Mitsubishi holds a 10% stake.

Plenty of room in diapers

Like Japanese consumers, Indonesians prefer soft bread. They even cut off the crust. Yamazaki touts its bread's softness and whiteness, putting the Japanese word funwari, or fluffy, on the packaging to emphasize the bread's Japanese quality. To let local consumers know that packaged bread can be toasted at home and still taste good, Yamazaki has 13 employees handing out samples at Alfamarts. 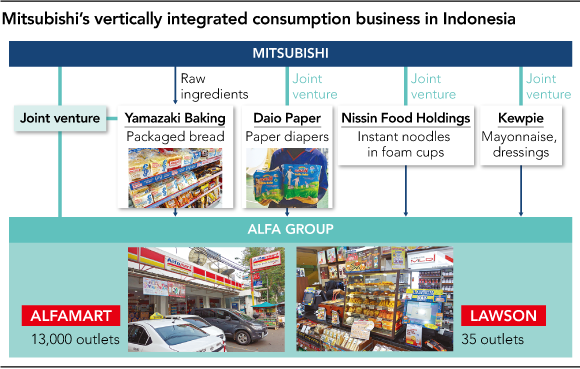 Indonesia has 255 million people -- and a demographic bonus. The proportion of those aged 15 to 64 is expected to keep increasing relative to the overall population until around 2040. This will be huge for growth.

Because rice and noodles are staples, Indonesians only consume about 20% the amount of bread that Japanese do. But with rice and noodle consumption stabilizing, "there is huge room for bread products to gain ground," said Ichiro Saito, president of Yamazaki Indonesia.

There is a problem. Indonesian law prohibits foreign equity in a local company running outlets with floor space of 400 sq. meters or less. But Mitsubishi can lean on Alfamart to provide it with small retail stores. That's the consumer side. On the supply side, it has had success persuading Japanese consumer goods makers to set up shop in Indonesia.

Like Daio Paper, which set up a joint venture with Mitsubishi in 2015. Last year, the venture began shipping paper diapers from its factory in Bekasi Regency. There is a lot of room in Indonesia's paper diaper market; only 40% of Indonesian mothers currently use them.

Indonesia is humid throughout the year so it is important for diapers to be dry. "We tell Indonesian consumers that our diapers are thin like underwear and easy to dry," said Shozo Ishikawa, head of the joint venture. Sales are brisk, and Daio Paper plans to spend 2 billion yen ($17.6 million) to increase capacity.

At Mitsubishi, Takehiko Kakiuchi took over as president in April 2016. For the preceding fiscal year, Mitsubishi logged a net loss for the first time in its history, due to commodity market fluctuations. The former "ace" of the trader's food department then decided to focus on the more revenue stable lifestyle business.

In the year through March 2017, the lifestyle business brought in 121.3 billion yen in net profit, accounting for 28% of overall profit. Among Mitsubishi's group companies, Lawson, which was consolidated in February, contributed 12.2 billion yen; Mitsubishi Shokuhin, a distributor, 7.7 billion yen; and Itoham Yonekyu Holdings, a manufacturer, 6.7 billion yen. In Japan, Mitsubishi's vertical integration is about to be completed.

But consumption in the country is not expected to grow further due to the shrinking population. Mitsubishi thus wants to make Indonesia its "second homeland," said Yuji Tsushima, vice president of MC Living Essentials Indonesia. Indonesia may not start contributing to Mitsubishi's bottom line for some time but could eventually eclipse Japan as a market, given its population and income growth.

Mitsubishi is also keen to export measures to make customers more loyal. It has introduced Ponta -- a loyalty points program run by subsidiary Loyalty Marketing -- to Alfamart and other retailers. More than 15 million Indonesians have so far registered for the program.

A third homeland could be Myanmar. In 2015, Mitsubishi bought 30% of a milling and coffee business owned by Capital Diamond Star Group, which deals in property and food businesses. Since CDSG also runs retail stores, it will be a bridge between Japanese and Myanmar companies in a similar fashion to Mitsubishi's Indonesian operations.

Although Mitsubishi fully controls Lawson in Japan, it has yet to take full control of the downstream of the supply chain in Indonesia because of regulations on foreign ownership. In Indonesia, the company currently runs 35 Lawson outlets -- all pilot stores.

In late June, 7-Eleven effectively pulled out of Indonesia. Modern Internasional, a mid-tier Indonesian conglomerate that had run the convenience chain in the country, closed all outlets (there were 116 at the end of March). Fierce competition from Alfamart and other retailers -- plus a lack of cooperation with Seven-Eleven Japan -- was blamed.

The success of Mitsubishi's Indonesia strategy depends on if the trader can strengthen its partner supply chains and deepen ties with the Alfa Group.