JAKARTA -- In Indonesia's capital, 7-Eleven is not your typical "grab and go" convenience store. It is more like a cafe: Customers sit at tables, eating packaged meals and sipping Slurpee frozen drinks. The store has air conditioning and free Wi-Fi. Open 24 hours a day, every day, 7-Eleven shops have become a favorite haunt for young Indonesians after school or work.

With 176 outlets in the country, the convenience store chain now faces the challenge of growing without drawing the wrath of suspicious regulators, or competitors eager to squash a foreign brand.

Henri Honoris, president of Modern Putra Indonesia which owns the country's 7-Eleven franchise rights, describes 7-Eleven as a hybrid of traditional and modern lifestyles. "After school, we used go to a local coffee shop or food stall to hang out," Honoris said, sitting in a recently opened shop inside the Indonesia Stock Exchange building in central Jakarta. "Now young people want air conditioning and want to use the Internet. So we combined them."

When it opened its first outlet in 2009, "Sevel," as 7-Eleven is known to Indonesians, shook up the retail industry with its eat-in spaces. At that time local competitors like Alfamart and Indomaret were, for the most part, just places where people popped in to buy household goods. But 7-Eleven was different. The rows of motorcycles parked under its bright signs at night are a testament to its popularity as a place to see and be seen.

Honoris and his staff closely observed customer behavior and built the business to meet needs. To lure trend-following youngsters, MPI put Cold Stone Creamery ice cream parlors in some of its stores. It also created new flavors for its fried chicken, which has become the best-selling product at many outlets.

In addition, the company launched a service so customers who buy a lot of ice cream, fried chicken and other ready-to-eat dishes can call a taxi to take them and their meals home. And food deliveries are available for those who prefer eating at their offices. 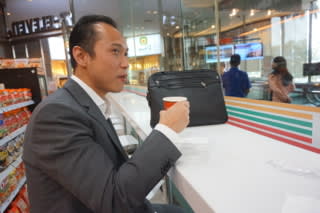 The convenience chain has changed the lives of many Indonesians. It has also been a lifesaver for Modern Internasional, parent company of the franchise owner. Founded by Honoris' grandfather, Otje, in 1971, it originally manufactured and sold Fujifilm cameras. When Honoris joined the company in 2001, digital cameras were turning the business upside down. Sales and profit started to fall. Honoris soon found himself cutting jobs instead of selling cameras. The company's payroll, which stood at 2,650 in 2007, was cut by more than half to 1,300 in 2008.

The family decided they needed to change the company's business model to stay afloat. They approached 7-Eleven Inc., the U.S.-based subsidiary that manages worldwide licensing for Japanese parent company Seven-Eleven Japan. The two parties had agreed to team up earlier, but the plans were shelved following the 1997 Asian financial crisis. Executives at 7-Eleven were skeptical at first but after two years of negotiation they signed a master franchise agreement in 2009. The Honoris family was back on track. In 2013, 7-Eleven accounted for more than 60% of Modern Internasional's 1.27 trillion rupiah ($103 million) in sales.

Honoris said he will continue to focus on opening stores. The company will soon open its second kitchen in Cakung, 20km east of downtown Jakarta, where its ready-to-eat food will be made and distributed to stores overnight. The new facility will allow Modern Putra Indonesia to open up to 90 shops in 2015, compared with this year's target of 50 stores. Honoris said that while his company remains focused on Jakarta, additional kitchens will help it expand into nearby cities and bring the total number of stores to more than 2,500 over the next decade. He predicts that by then, convenience stores will account for nearly 100% of the group's revenue.

MPI also plans to enter e-commerce, which is catching on with young Indonesians. Starting next year, in a partnership with local e-commerce companies and Blue Bird Group, Indonesia's biggest taxi operator, 7-Eleven stores will act as a hub for online payments and merchandise pickups. MPI also plans to lease out storage space in the outlets to its e-commerce partners. Blue Bird's logistics subsidiary, Iron Bird, will handle deliveries.

Although convenience stores have taken root in Indonesia, some problems have emerged. Conveniences stores have become a symbol of modernization, drawing criticism from mom-and-pop stores for stealing their customers. Residents near stores sometimes complain about the sale of alcohol leading to loud, late-night partying in once quiet neighborhoods.

Local authorities, who also have to deal with traffic congestion, have held back on issuing permits. Rival chains such as Lawson have been forced to close stores in some areas after complaints that they were operating without authorization. Incoming President Joko Widodo, who takes office Oct. 20, is known as a strong supporter of traditional markets.

Meanwhile, as 7-Eleven pushes deeper into the hinterland, MPI faces an increasingly challenging regulatory environment. The legal status of 7-Eleven became the subject of controversy precisely because its business blurred the lines between retailing and food service. Is it a minimarket or a cafe? Because the chain did not fall neatly into either category, regulators had to scramble to create one, resulting in a complex and fragmented set of rules.

As things stand, 7-Eleven operates under a restaurant license. Honoris said his company has no difficulty getting operating permits. But it is becoming harder for MPI to open up big new roadside stores. The company has responded by shifting its focus to opening smaller shops inside malls and office buildings.

Honoris argues his company's close ties to small business is beneficial for both sides. MPI sources some of 7-Eleven's private-label products from local manufacturers. The company will start franchising its outlets to individuals next year, which Honoris said will not only boost MPI's growth but also help small business owners earn a living.

U.S. based 7-Eleven Inc. opens stores in big Southeast Asian countries through licensing agreements with local companies. It has dealt with similar issues elsewhere, such as how to live side-by-side with traditional retailers. In Thailand, there are food stalls at many 7-Eleven stores' doorsteps. Still, it has become the largest convenience chain in the country, with nearly 8,000 outlets.

Few doubt that Indonesia's consumer market has bright prospects. As the economy grows, millions of low-income citizens are set to enter the middle class. With their basic needs met, they will have more money to spend on efficiency and quality. This has already drawn a gaggle of foreign retailers into the country. And Alfamart and Indomaret, which each run nearly 10,000 stores, show no sign of slowing down.

Honoris seems to relish the competition. "We are still in the developing stages" he said, grinning as he finished up his Toraja coffee -- an Indonesian variety -- before leaving for Tokyo. There he will meet with potential partners in hopes of bringing back a hit product. "We are very committed. We won't stop growing," he vowed.