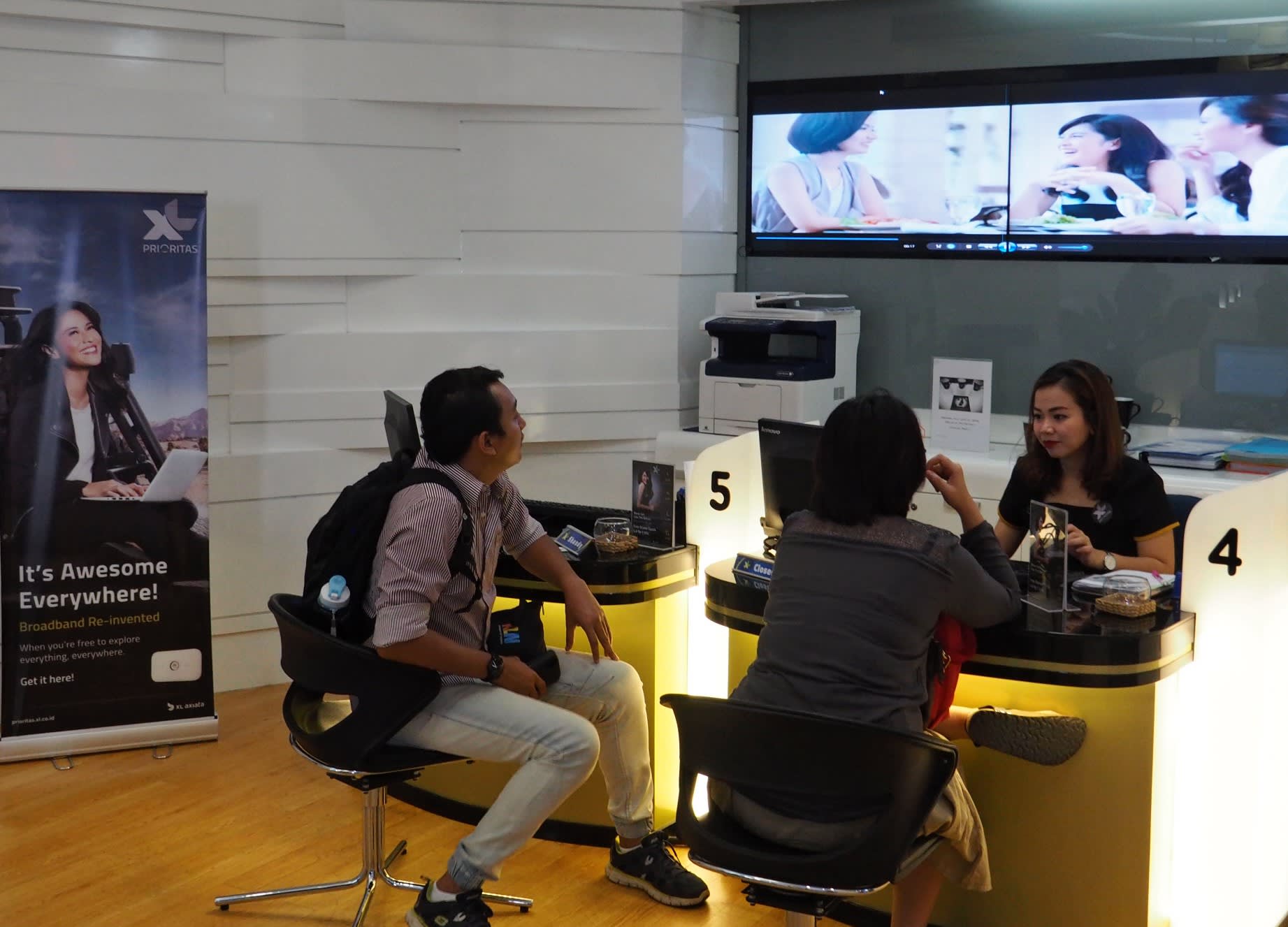 JAKARTA/BANGKOK -- Wireless carriers in Indonesia are shifting their strategic focus as market growth plateaus. Now that smartphones are ubiquitous in the country, the goal is to make the most of them by introducing postpaid plans for bigger chunks of data.

By encouraging customers to go ahead and use more data, this evolution could have spillover effects for video streaming sites along with financial services and e-commerce companies.

XL Axiata has launched a plan it calls XL Prioritas, allowing subscribers to consume up to 100 gigabytes of data. It hopes this "use now, pay later" approach -- as opposed to far more popular prepaid plans -- will attract data guzzlers. A 35-year-old office worker in Jakarta recently switched to XL Prioritas, signing up for 800 minutes of talk time and 6GB of data for 400,000 rupiah ($30.82) a month. He said he prefers this because he no longer has to worry about his remaining payment balance, like he did with his old prepaid plan.

XL Prioritas subscribers can opt for at little as 1GB, or go for the maximum 100GB at a cost of 750,000 rupiah. Since subscribers are required to pay with credit cards, there is little risk to the carrier.

So far, XL Axiata has accumulated 490,000 postpaid contracts, after a 10% increase over the past few months, CEO Dian Siswarini said. The carrier hopes to raise the ratio of postpaid users to 20-30%, from a little more than 1% at present. It also hopes to increase the average monthly payment from around 100,000 rupiah to 180,000 rupiah as soon as possible.

Ninety-nine percent of Indonesia's mobile phone holders still use prepaid plans. They go to shops and, typically, pay extremely small sums for limited contracts. This has contributed to widespread use of cellphones in rural areas.

The total number of cellphone contracts in Indonesia hit 340 million in 2015, well above the population of 250 million. This made the country the world's fourth-largest wireless market after China, India and the U.S. But with the penetration rate at over 130% of the populace, there is little room for growth.

Indeed, growth is decelerating. This is putting pressure on carriers to squeeze more money out of existing users. The average monthly payment per wireless connection is about 40,000 rupiah, which works out to less than one-tenth the average for Japan's NTT Docomo -- over 4,000 yen ($38.88).

Postpaid users, on average, pay 2.5 to five times more than prepaid ones.

Indosat, another major player, has begun offering "all you can eat" plans for its fourth-generation high-speed, large-volume services. The 4G services are available mainly in big cities such as Jakarta.

Industry leader Telkomsel is now accepting cash deposits for a set amount of access per month, targeting users without bank accounts or credit cards. This is seen as a step toward postpaid plans.

Improved telecom infrastructure is underpinning the change in strategy. Telkomsel, XL Axiata and Indosat have been expanding their 4G services to smaller cities.

At the same time, audio and video streaming services are determined to tap the market. Netflix, the U.S. video streaming company, broke into Indonesia in January. Swedish digital music company Spotify arrived in March. As users become accustomed to burning through data, they are likely to use their phones more and more for banking, shopping and other tasks.

For Telkomsel, XL Axiata and Indosat, average usage increased 12.5% on the year in the January-March period of 2016, according to Indonesian securities house Mandiri Sekuritas. While the market for wireless and other telecom services is forecast to grow some 10% this year, success in promoting postpaid plans could have a significant impact on carriers' earnings.

A similar shift is occurring in other Southeast Asian markets as carriers look to secure long-term customers.

Competition for postpaid subscriptions has been intensifying in Thailand since the launch of 4G services earlier this year. Advanced Info Service, the No. 1 provider, offers 4,990 baht ($143) smartphones for free to customers who switch from prepaid to postpaid plans. Rival True Corp. has started offering to halve charges for up to 24 months.

Both AIS and True offer these perks on the condition that subscribers lock themselves in for at least six to 12 months.

Postpaid contracts account for 20% of all cellphone plans in Thailand, up from 10% five years ago. With middle- and high-income earners increasingly opting for deferred plans, Thai subscribers to such plans pay three times more, on average, than prepaid users.

The penetration rate of postpaid plans in Southeast Asia roughly correlates to gross domestic product per capita. Subscribers opting for postpaid services outnumber prepaid customers in Singapore, while in Indonesia and the Philippines, the rates are well below 10%.