JAKARTA -- Indonesia's leading private oil and gas company is snapping up resource stakes around the globe, seeking to steel itself to increasingly difficult conditions at home. Indonesia is Southeast Asia's largest oil producer, but supply has tightened due to economic growth and sluggish development of new fields. Drilling is becoming increasingly inefficient, with companies forced to explore in distant, deeper waters.

This has Medco Energi Internasional looking elsewhere in hopes of shoring up profitability.

On Monday, the company announced that it would acquire eight Tunisian resource blocks for $114 million. Upon local government approval, wholly owned subsidiary Medco Tunisia Petroleum is to buy all shares in Storm Ventures International (Barbados), which controls the fields.

The target company is a unit of Canada-based Storm Ventures International.

The eight working areas are estimated to have reserves totaling 12.3 million barrels of oil equivalent, with expected daily production of 2,800 barrels. Two of the eight blocks are already producing oil, two are under development, and the rest are still being explored. 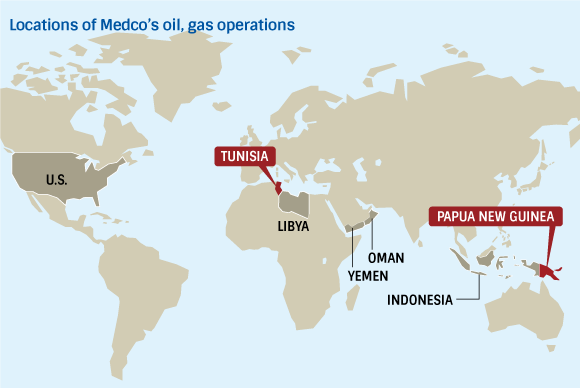 Medco has been expanding its operations in the Middle East and North Africa. It already owns oil and gas interests in Oman and Yemen, and it recently started developing an oil field in Libya with the aim of starting production in the next few years.

Closer to home, subsidiary Medco Asia Pacific struck a deal to buy a 90% stake in Moonbi Energy. The unit of Moonbi Enterprises holds four development sites within a zone called Petroleum Prospecting License No. 470, adjacent to the large Juha gas field in Papua New Guinea. The value of the deal was not disclosed.

According to Jero Wacik, Indonesia's minister of energy and mineral resources, the country's daily production target for 2014 will be cut from 870,000 barrels to a record low of 818,000 barrels.

Amid this waning output, Medco's earnings have taken a hit from increased development and sales expenses. In the fiscal year through December, the company's net profit declined for the second straight year.

State-owned competitor Pertamina is also racing to expand overseas. It has acquired interests in Algeria and Iraq.