Indonesia's huge, diverse Muslim population could give it halal leadership JAKARTA When a Muslim fashion brand here declared one of its product lines "Indonesia's first halal-certified headscarves" in February, Indonesian netizens had a field day.

After all, it is unusual for headscarves -- and clothing in general -- to be subject to Muslims' halal/haram scrutiny.

"Halal" means "permissible," while "haram" means "forbidden." These terms traditionally apply only to food and drinks -- with the basic rule being that all of them are halal except for a few prohibited ones, such as pork and alcohol.

Clothing, meanwhile, is commonly subject only to Islamic guidelines regarding how much and which parts of the body should be concealed -- which are different for men and women.

"Are you sure the hijab you wear is halal?" reads a banner at Zoya, which runs dozens of retail outlets across the country. 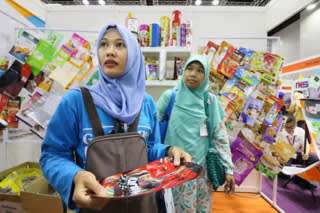 A halal exhibition held in Kuala Lumpur in April displayed hundreds of products geared toward Muslims. (Photo by Yumi Kotani)

The modest clothing company was accused of staging a PR stunt, and was battered with criticism for stirring uneasiness among local Muslims -- some of whom now think they should pay attention to the materials their outfits are made of.

He said Zoya's halal claim was misplaced, because the halal certificate was granted to one of its fabric suppliers -- not to the company. Nevertheless, Hakim believes the whole controversy is a good opportunity to educate the public on "halal awareness."

"The concept of halal in Islam doesn't concern only food, but also every aspect in life -- including clothing," he said.

Hakim's view on halal matters is on the more conservative side of Islam.

And in the world's most populous Muslim nation, which prides itself on being the world's third-largest democracy, much of the diverse 200 million-strong Muslim population would beg to disagree with him.

Except perhaps for the chorus of agreement on the prohibition of pork, Indonesian Muslims have varying standards on the halal status of food and drinks. For example, some think wine is OK because it contains only a small amount of alcohol, while others steer clear of it.

Some think it is okay to eat beef and chicken, regardless of how they are prepared. Others insist there must be a reassurance that the animals are slaughtered according to the Islamic way, which includes slitting the animal's throat while saying "bismillah," or "on behalf of God."

Of course, there are various levels of compliance. Nevertheless, Indonesia's Law on Halal Product Guarantee has taken a somewhat extreme approach to halal matters by making almost everything subject to its provisions.

Article 4 of the law says, "Products entering, circulating and traded inside Indonesia must be certified halal."

Another article of the law defines "products" rather broadly: "Goods and/or services [comprising] food, beverages, medicines, cosmetics, chemical products, biological products, genetically engineered products, as well as items that are worn, used or made use of by the public."

Hakim admits the law will be hard to implement, but suggests that derivative technical regulations currently being drafted may clarify some of the more contentious points.

Also, he suggested that the passage of the law, after nearly a decade of delays in deliberations due to intense controversy, may be "political." Lawmakers from the previous government passed the law on Sept. 25, 2014 -- a week before the newly elected legislators were sworn in. Three weeks later, then-President Susilo Bambang Yudhoyono signed it, just a few days short of new President Joko Widodo's inauguration.

The law is set to come into full effect in 2019, in order to allow time for the government to issue all the needed technical regulations and give industries five years to comply.

"BURDEN" FOR INDUSTRY While the law suggests it will subject every kind of product and service to halal/haram scrutiny, only food and pharmaceutical industries have reacted. Other industries may think it unlikely that the law will be applied to them, hence their silence on the matter.

The pharmaceutical industry has argued that most of the raw materials for their products are imported, therefore it is very difficult to make sure all of them meet halal certification requirements.

Meanwhile, the Indonesian Food and Beverage Association, or GAPMMI, said it regrets that the certification was made mandatory instead of voluntary -- companies choosing to keep producing food with prohibited ingredients have been instructed to put a non-halal label on their products. People gather for a group photo at a halal exhibition in Kuala Lumpur in April. Malaysia and Indonesia are competing to become a hub for Muslim-friendly products and services. (Photo by Yumi Kotani)

Failure to comply will subject a business to sanctions that include written warnings, fines or the revocation of a halal certificate already obtained. Potentially more damaging, however, is public exposure to an alleged case of disobedience -- once a product is labeled or insinuated as containing pork or pig DNA, it is hard to sell it to the predominantly Muslim population.

"In principle, we agree that the halal law is needed, because there have been demands for halal products from our customers in Indonesia and globally, and the trend indeed has been increasing," GAPMMI Chairman Adhi S. Lukman said. "But this law ... will place a heavy burden on producers."

Lukman said the certification is not exactly an issue for large food manufacturers in Indonesia, which commonly seek a halal label for items they produce in large numbers.

"We thought it essential for doing business in Indonesia, which has the largest Muslim population in the world," said a spokesman of Toridoll, the Japanese operator of Marugame Seimen restaurants. He added that the number of Muslim customers increased after Marugame obtained the certificate in October last year.

Lukman, however, thinks imposing the regulations on small and micro businesses -- such as street food stalls and vendors -- is not realistic.

Hakim of LPPOM MUI says these businesses -- there are millions of them -- can enjoy certification free of charge, but who will subsidize the costs is controversial. Some non-Muslim members of the public have voiced an objection to any use of taxpayers' money for this purpose.

At present, certification costs between zero rupiah (for subsidized businesses) and 5 million rupiah ($368) for a halal certificate that expires after two years.

Additionally, street foods are not commonly subject to halal/haram scrutiny. The average Indonesian Muslim will automatically assume they are halal, because the sellers are mostly fellow Muslims and because they are familiar with the ingredients.

Jakarta office worker Tifa Asrianti, for example, says she has no problem eating at street food stalls, even though they never display a halal label.

"I know what Indonesian foods are made of. For example, sayur lodeh -- I know what the ingredients are," she said, referring to a traditional vegetable dish simmered in coconut milk.

"Things like minestrone or povitica, however, I would have to research first what they are made of," she added, referring to foreign dishes from Italy and Eastern Europe.

Asrianti said this does not mean she avoids foreign restaurants that are not halal-certified altogether. She is just "more careful" with them.

All the controversy does not stop the Ministry of Industry from setting out plans to develop several "halal industrial zones" in Indonesia where halal-certified manufacturers can gather in one area that will have its own LPPOM MUI laboratory.

The ministry is set to put the plans in motion sometime this year.

Imam Haryono, director general for industrial zone development, said the move is meant to boost the competitiveness of the country's halal industry, as it is currently lagging behind those of its Southeast Asian neighbors, most notably Malaysia, and even non-majority Muslim nations like Singapore and Thailand.

Indonesia's large Muslim population, unsurprisingly, makes it the top Muslim food market -- consumers there spent $157.6 billion on food and beverages in 2014, according to the State of the Global Islamic Economy Report 2015-2016.

In terms of halal food industry development, however, Indonesia does not even make it to the Top 10. Malaysia led the rankings here, followed by Pakistan, the United Arab Emirates and Australia. Nestle Malaysia is the world's largest producer of halal products.

The Association of Southeast Asian Nations Economic Community, which was launched in December last year, is another concern for Indonesia. The regional economic integration scheme encourages free flows of products between the 10 member states of ASEAN, so there are worries that halal food from neighboring countries may soon flood the archipelago.

The plans to develop the halal industrial zones are in anticipation of this, Haryono said, and also to tap into the "growing potential" offered by the estimated 1.7 billion Muslim population worldwide.

"The Indonesian government doesn't want to be left behind in benefiting from the potential of the global halal product market," he said.

"The Industry Ministry will continue to encourage local industries to tap into the growing potential -- especially in the Middle East and in non-Muslim nations whose Muslim populations have kept growing," he added.