JAKARTA -- Telekomunikasi Indonesia (Telkom), the largest telecommunication provider in the country, has appointed Alex Sinaga, the CEO of its mobile subsidiary Telkomsel, as its new chief. The post has been vacant since October when former CEO Arief Yahya resigned after being appointed as the minister of tourism by President Joko Widodo. 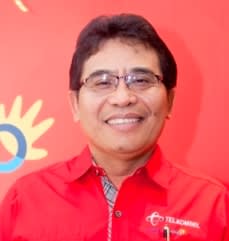 Sinaga was appointed on Friday following a shareholders meeting and a reshuffle of the board. The minister of state-owned enterprises cut the number of Telkom's board members from seven to four, including the CEO.

The Indonesian government has been carrying out reforms at 138 state-owned enterprises as of May. Telkom's reshuffle came following changes in management at flag carrier Garuda Indonesia on Dec. 12.

Sinaga became CEO of Telkomsel in 2012. He has served as a general manager in the parent Telkom since 2000 and had been in charge of the wireless network division.