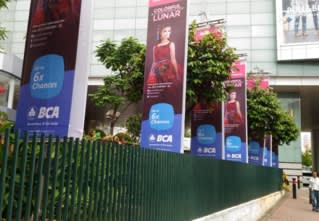 Bank Central Asia, which recently overtook Singapore's DBS Group Holdings as Southeast Asia's largest lender by market value, was the last of the big three to report its full-year earnings. The bank on Thursday said its net profit grew 9.3% to 18 trillion rupiah ($1.36 billion).

That beat the 2.3% profit growth at Bank Mandiri, Indonesia's largest lender by assets, and the 5% rise at Bank Rakyat Indonesia, the No. 2 player by the same metric.

Nevertheless, like the figures of the two state lenders, BCA's result paled in comparison to its performance the previous two years. The private lender's profit rose 21% in 2013 and 15.7% in 2014.

BCA said its profit growth was supported by an "expanding loan portfolio and lower cost of funds." It said it handed out 387.6 trillion rupiah worth of loans last year, up 11.9% from 2014.

Credit grew "across all segments," with the corporate sector booking the highest increase, at 17%. Commercial and small and medium enterprise credit, as well as consumer credit, grew around 9% each. BCA said that toward the end of the year, an improving economic situation and a pickup in the consumption cycle contributed to the increases.

Like Mandiri, BCA said it will continue to be "cautious" about extending loans in 2016, in order to keep its ratio low. "We're aware that the economic situation will still impact on the Indonesian banking sector's performance, including BCA's," Jahja Setiaatmadja, BCA's president, said in a press statement on Thursday.

On the other hand, BRI, known for its focus on microfinancing, aims to more than quadruple its microloan disbursements this year to 67.5 trillion rupiah.

BRI Vice President Sunarso said last month the bank had no particular concerns about nonperformance in the microloan segment, adding that it had one of the lowest ratios compared with other sectors.

Kim Kwie Sjamsudin, head of research at Yuanta Securities Indonesia, said that for the most part, the earnings "came in within our expectations."

As for this year, Mixo Das, a Singapore-based equity strategist at Nomura, said it is "becoming difficult to predict the banks' earnings due to the recent discussions surrounding banking regulations." He was referring to the Indonesian Financial Services Authority's plan to impose a ceiling on deposit interest rates.

"The major banks are fundamentally strong and will benefit from Indonesia's economic recovery," Das said. "But investors may be on the sidelines unless there is more certainty in regulations."