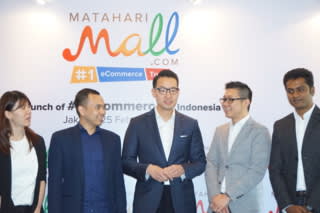 John Riady, a director at Lippo Group and a grandson of its founder, Mochtar Riady, said the group is targeting $1 billion in sales from Mataharimall within two years.

The investment will be used to hire talent, develop the shopping portal and expand the group's distribution network.

Mataharimall will open in March.

"Our vision is to build the most powerful ecosystem that brings together buyers and sellers to do business anytime and anywhere," Riady said Wednesday.

The sprawling conglomerate is the latest to tap into Indonesia's online retail market as its smartphone economy grows. Alibaba, the Chinese e-commerce giant; SoftBank, a Japanese cellphone service provider; and Lazada, a Singapore e-tailer; plan to enter or expand their e-commerce businesses in Indonesia, the world's fourth most-populated country.

Lippo Group hopes to leverage its existing distribution and retail networks so Mataharimall can grow faster than its competitors. Lippo-affiliated department store operator Matahari Department Store and hypermarket operator Matahari Putra Prima have a combined 400 stores or so across the archipelago.

Mataharimall will feature products from these and other stores. Consumers can also pay for, collect and return goods purchased through the site at 131 Matahari department stores.

Lippo has been building up its Internet-related businesses in recent years. It partnered with Japan's Mitsui Corp. in 2013 to launch Indonesia's first 4G service and open a data center. More recently, it has established Lippo Digital Ventures, which invests in early-stage Internet companies.

Riady declined to comment on future partnerships, simply stating that the group aims to become "the No. 1 e-commerce company in Indonesia."