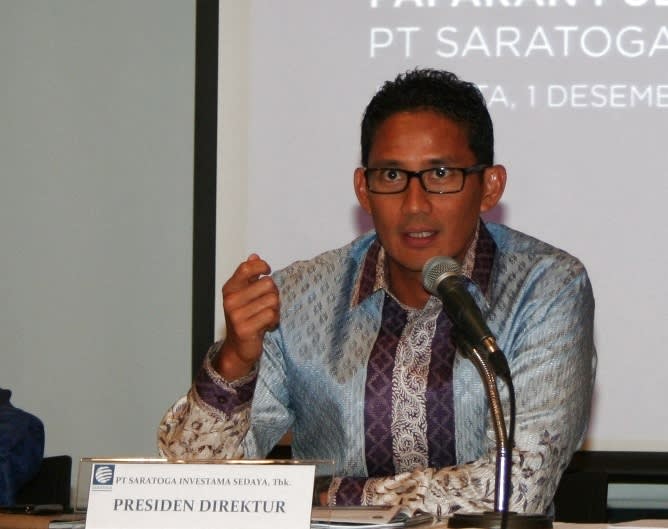 JAKARTA -- Saratoga Investama Sedaya plans to shift a big chunk of its portfolio from natural resources to the consumer sector amid a global decline in commodity prices and a booming domestic market.

Saratoga's president Sandiaga S. Uno said he plans to bring up the ratio of how much Saratoga invests in consumer-related companies from the current 10% of its net asset value to up to 40%. The increase will come during the next five years.

"We are extremely excited about the rising middle income class," Uno said.

The investment company, which went public last year, had stakes in 17 companies with a total net asset value of 21.7 trillion rupiah ($1.7 billion) as of September. The majority of these companies deal in natural resources, such as coal producer Adaro Energy, and infrastructure, such as telecommunications tower operator Tower Bersama.

Saratoga makes profits by acquiring shares in a company when the price is low, improving the company's financial performance and later selling the shares at a higher price. The company has capitalized on investments it made in the aftermath of the Asian financial crisis of the late 1990s, when Indonesia's economy was hit hard by a plunging rupiah.

Saratoga recently made its first investment in the apparel business by acquiring a 4% stake in Gilang Agung Persada -- which operates franchise stores of high-end foreign fashion brands such as Guess, Celine and Swarovski -- for $5 million.

"We are also looking at sectors such as fast-moving consumer goods and food," Uno said, referring to snacks and beverages. "Our emphasis will be on private and growth-stage companies because that will allow us the flexibility to work hand in hand with partners and the management."

The shift comes amid a global downtrend in commodity prices. Saratoga suffered a net loss in 2013, mainly due to the weak performances of the commodity-related companies it holds stakes in. Although Saratoga swung to a net profit of 762 billion rupiah in the January-September period, Uno wants the company to partially divest itself from the natural resources sector, such as coal and sand shipping company Seroja Investment.

He added that finding attractive deals in the consumer sector is becoming increasingly difficult; foreign investors' strong appetite for consumer-related stocks is driving up valuations, he said.

"Making money the easy way is no longer here," Uno said. "There is big competition from foreign entities looking to invest in Indonesia."