Hary Tanoesoedibjo is interviewed by reporters, including some belonging to his MNC Group, in November.
WATARU SUZUKI, Nikkei staff writerFebruary 28, 2016 19:00 JST | ASEAN
CopyCopied

JAKARTA -- When Indonesia's state-owned telecommunications company on Jan. 27 blocked Netflix, the U.S.-based video streaming service, Hary Tanoesoedibjo was there to cheer the move.

"If I were the government," he told reporters a few days after the move, "I would block it."

The media tycoon apparently has put some thought into the matter. "One, Netflix has to have a legal entity in Indonesia so that it will pay taxes," Tanoesoedibjo continued. "Two, its servers should be in Indonesia, so the content can be monitored. Three, foreign companies should not have a majority ownership in [Indonesia's] media industry."

Indonesians have an alternative of sorts: MeTube, launched on Jan. 29 by Tanoesoedibjo's Global Mediacom, also known as MNC Group. While the name mimics that of another popular streaming service, a big portion of the content comes from programs that the group's television stations have aired.

The comments made by Tanoesoedibjo -- known among locals as Hary Tanoe -- reflect how the mogul is blurring the lines between his approach toward business and politics. Tanoesoedibjo has been crisscrossing the archipelago promoting the United Indonesia Party, which he established a year ago. According to its website, the party hopes to "realize an Indonesia that is developed, united, just, prosperous, sovereign, dignified and cultured." Meanwhile, Tanoesoedibjo's appetite for business shows no signs of being sated. Tanoesoedibjo plans to invest up to $500 million in his businesses this year. Among the plans:

In a recent interview with Forbes, Tanoesoedibjo said the time he spends on business and politics is "fifty-fifty, out of 16 hours a day, seven days a week."

Born as the son of a successful business man in the city of Surabaya, East Java, the 50-year-old is among a breed of powerful tycoons that emerged with the downfall of the autocratic regime of former President Suharto (1967-1998). After obtaining an MBA in Canada in 1989, Tanoesoedibjo returned to Surabaya to set up an investment company, Bhakti Investama. A few years later, the company became known for obtaining capital from a fund run by billionaire investor George Soros.

Tanoesoedibjo's big opportunity came during the Asian currency crisis, which struck in 1997. The rupiah was among the currencies that took a plunge.

But Tanoesoedibjo was in position to profit. He took his investment company public shortly before the crisis deepened, and used the proceeds to buy his corporate crowns: three TV stations networks, two of which had been run by members of the Suharto family. During Suharto's three decades in power, his family firmly planted itself into Indonesia's business communities.

By picking up some of the Suharto family jewels, Tanoesoedibjo emerged as a prominent post-crisis political and business figure.

As a media mogul, he lured young audiences by strengthening on lifestyle and entertainment content. He introduced Indonesian Idol and X Factor Indonesia -- domestic versions of popular foreign shows. With an eye on global trends, his TV networks also backed JKT48, a Jakarta offshoot of Japan's popular idol group AKB48. 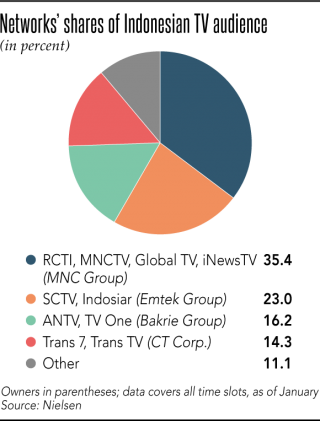 The three networks currently account for about a third of Indonesia's entire TV audience.

As the Indonesian economy bounced back from the currency crisis, advertising revenue from foreign and domestic companies turned the networks into cash cows that Tanoesoedibjo milked to expand his financial services and property businesses.

Tanoesoedibjo also got into online media early on. Some bets have not worked out; the group's partnership with Japan's Rakuten on a shopping portal ended in 2013. Others have soared. Linktone, currently MNC Media Investment, a gaming company that the group acquired in 2008, reported a surge in revenue last year.

Buoyed by his business success, Tanoesoedibjo forayed into politics.

He joined the NasDem Party in 2011 but later quit due to disputes with Surya Paloh, an owner of a TV news channel who later took over the party's leadership. In the election year of 2014, Tanoesoedibjo became the running mate of Wiranto, founder of the People's Conscience Party. After the pair failed to gain enough support to secure the nomination, Tanoesoedibjo resigned from a second party and threw his support behind former general Prabowo, who went on to lose to President Joko Widodo.

Undeterred, Tanoesoedibjo established the United Indonesia Party in February 2015. While the party's popularity has yet to be tested, Tanoesoedibjo's frequent appearances on the TV stations he owns have helped boost his presence. So has his Twitter account, which has more than 1 million followers.

But his ratings among investors are falling. The market value of Media Nusantara Citra, Tanoesoedibjo's largest listed company, is down about 40% from a year ago. At 27 trillion rupiah ($1.89 billion), it trails far behind Surya Citra Media, the country's No. 2 TV network operator, which has an owner who rarely appears in public.

Tanoesoedibjo's efforts to restore confidence through share buybacks have had limited effect. Some analysts fear that Tanoesoedibjo is taking too much risk. As a result of an aggressive expansion drive, the interest bearing debt of MNC Investama, a holding company, surged from 4.1 trillion rupiah at the end of 2011 to 24.5 trillion as of September 2015, according to FactSet data. This led to a huge foreign exchange loss on the company's dollar-denominated debt in the first nine months of 2015, when the rupiah tumbled to a 17-year low. Standard & Poor's has downgraded the company's credit rating.

There are also lingering concerns over Tanoesoedibjo's involvement in legal disputes, including an entanglement with one of Suharto's daughters over the ownership of a TV network.

"Foreign investors are still bullish, but a lot of local investors don't trust [the group's] corporate governance," an analyst at an Indonesian brokerage said. Another analyst echoed this sentiment, saying Tanoesoedibjo's rising political ambitions can lead to irrational corporate decisions.

Tanoesoedibjo has brought in many professionals to serve as directors at his group companies, but Tanoesoedibjo himself still serves as president of most of them.

Tanoesoedibjo seems to be brewing a political strategy ahead of Indonesia's next presidential election, in 2019. A recent text message made public reads, "Someday I'll be a leader of this country." It should be noted that at times Tanoesoedibjo has expressed willingness to back other politicians.

Tanoesoedibjo is hardly Indonesia's only businessman with political ambitions. And with competition intensifying in the private sector, these executives are having to sort out their business and political affairs.

Tanjung is known for his close ties with the previous president, Susilo Bambang Yudhoyono. He became a key economic minister during the final months of Yudhoyono's administration. Meanwhile, Sandiaga Uno, a popular Indonesian businessman, decided to step down from all of his corporate positions last year after being appointed an advisory board member of the opposition Great Indonesia Movement Party.

Tanoesoedibjo rose through the ranks as a trader, buying and selling assets. "Every situation always creates opportunities, but the opportunities are different," he told Forbes. His appetite for success seems larger than ever, but the potential pitfalls have equally grown. In the race for power in Indonesia, his ability to manage both business and political interests is being tested.