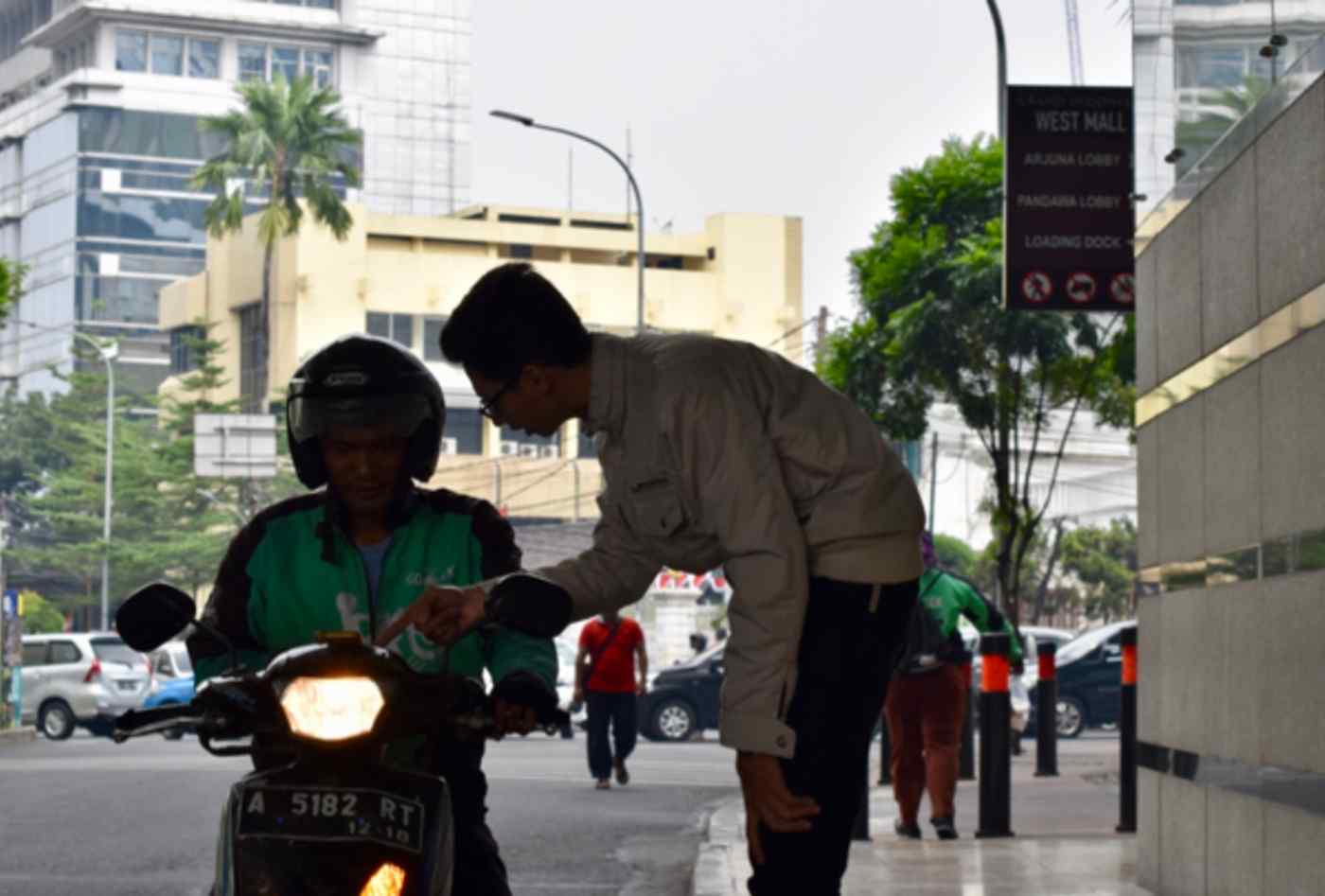 TANJUNG GUSTO, Indonesia -- The fast pace of development in Indonesia's cities has spawned many a technology-based startup in the last few years, from ride-hailing apps to online shopping giants to touchscreen food delivery services. These are the early fruits of a tech economy the government hopes will be worth $130 billion by 2020.

For many in remote parts of the far-flung archipelago, where standards of living are much lower than in the cities of Java and Sumatra, startups are more homespun and their ambitions are modest. Yet across the gamut of would-be entrepreneurs, from rural remote villages canopied by palm trees to thronged vast cities, there are common challenges: from raising cash, to nudging government into necessary reforms, managing complicated logistics and fending off jealous competitors, many of the hurdles are identical and boil down to the scramble for funding sources and government backing.

The Aug. 18 announcement that online shopping giant Tokopedia was to get a $1.1 billion injection from a consortium led by Alibaba Holding shone a spotlight on the tech sector, which has also bred the likes of Go-Jek Indonesia, the ride-hailing and courier service that is giving Grab and Uber a run for their money. 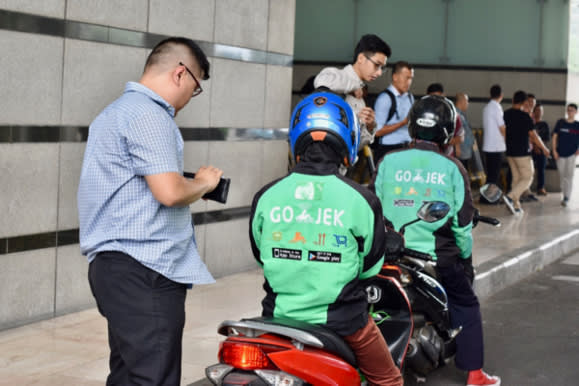 Go-jek passengers pay their drivers after arriving at their destination, a huge central Jakarta mall. (Photo by Simon Roughneen)

Just days before the announcement of the Alibaba-Tokopedia deal, U.S. market research company CB Insights named Jakarta as the world's leading "frontier" market city in terms of total venture capital injections announced since 2012 -- $789 million in funding across 127 deals, twice as much as second-placed Dubai, and almost three times as much as neighboring Bangkok and Kuala Lumpur, which tied for fifth place.

"Bolstered by a young, more confident, and growing middle class, and rising smartphone penetration, a burgeoning crop of tech startups are now attacking both consumer and small business financial services in Indonesia," CB Insights said in the report.

It noted however that the bulk of venture capital funding deals were still concentrated in major economies such as China and those in Western Europe. The U.S. is still the biggest destination for venture capital and absorbed 58% of the 2012-2017 total.

The spate of recent deals shows that there is increasing confidence in Indonesia's digital economy as more people live their lives online. Photo-sharing app Instagram one example: Its biggest user base in the Asia-Pacific region is Indonesia.

"Five to six years ago, if you were talking about getting investment for a business model that was non-conventional, there was little appetite," said Dayu Dara Permata, vice-president of Go-Jek Indonesia.

Go-Jek takes its name from 'ojek,' the Indonesian word for motorcycle taxi, long a popular and relatively fast way to weave through the city's infamously congested traffic.

Jostling for market share and investment capital, Go-Jek has innovated and expanded into new businesses to the extent that "it is not an ojek company" any more, according to Permata, She cites as an example Go-Life, a wing of Go-Jek Indonesia that she co-founded, which offers a range of services such as car maintenance and home-cleaning. Indonesia's digital economy has more room to grow. A 2016 report by Singaporean sovereign wealth fund Temasek Holdings and Google estimated that Southeast Asia's web-based economy could be worth $200 billion annually within 10 years, as the region adds 3.8 million new internet users each month.

With a population of 260 million, Indonesia is the biggest potential market in the region, with e-commerce market expected to expand to $46 billion in a decade. President Joko Widodo has set an even higher bar, saying that Indonesia aimed to have 1,000 "technopreneurs" and a digital economy worth $130 billion by 2020.

But investment in Indonesia's wider economy has often been held up by complicated rules and permits -- hurdles the government acknowledges need addressing.

"We have too many regulations, too many permits, licenses," said Thomas Lembong, chairman of the Investment Coordinating Board, speaking at a recent seminar organized by The Economist in Jakarta.

"A lot of the laws are unclear, uncoordinated, conflict with each other," he said.

There have been some changes, such as the establishment of a so-called one-stop service for investors, aimed at reducing the need for companies to visit multiple ministries and agencies to process paperwork and get permits signed.

The government plans to bring broadband to regional capitals, further boosting Indonesia's appeal as a digital economy and making doing business in general easier across the archipelago.

"By 2019 all capitals in regions around the country will be connected to broadband," said Rudiantara, Indonesia's minister for communication and information technology, speaking at a recent event held at the Center for Strategic and International Studies, a Jakarta research organization.

But even if networks are expanded as planned, Indonesia's digital sector will still make a small fraction of the country's nearly $1 trillion economy. Indonesia's main exports are still mostly in natural resources such as minerals, palm oil and coal.

Around half of the gross domestic product is generated by small and medium enterprises, of which there are an estimated 50-60 million, including the smallest street vendors and roadside shops. Most of the population -- 80% -- does not have a bank account and 203 million people earn less than $4.50 a day, according to a 2016 report by consulting company KPMG.

In rural Indonesia, particularly outside the most populous and developed western islands of Java and Sumatra, not only are internet and phone signals limited to major towns, some areas are so remote and underserved that a school counts as a startup.

Vast distances and dense jungle terrain mean that villagers in Ujang in the north of Kalimantan have to face five to 10-hour boat trips, depending on the weather and season, just to get to the next town.

With no school in the village, Sri Tiawati founded her own startup, ferrying books and teaching materials on successive boat trips up and down the Magang River before launching the indigenous Punen Semeriot school in December 2015.

"High tide is faster, in five hours we can reach it. In low tide, it can take 10 hours, we have to drag the boat some of the way," she said, recounting the effort needed to reach the village.

Just as sharply dressed young Indonesians angle for start-up capital in the metropolitan areas, Sri Tiawati, then only 22, faced dilemmas of her own, albeit on a different scale, in raising money and resources.

"The main challenges at first were how to acquire books and other teaching tools," she said, which she got around by lobbying indigenous leaders across Indonesia for donations.

The Punen, numbering around 142,000, are part of the bigger Dayak ethnic group, and are among the dozens of indigenous people seeking government reforms giving them autonomy over managing what they deem to be their customary land -- just as entrepreneurs are hoping the government will continue to streamline the bureaucracy around doing business in Southeast Asia's biggest country.

"I can see that the government has been trying to support new entrepreneurs," said Go-Jek's Permata. "But it has a lot of other priorities, and the private sector can also chip in."

But for both kinds of startups, government rules have not been the sole obstacle. Just as Go-Jek has faced the ire of conventional taxi and ojek drivers, which have taken to streets to protest that ride-sharing apps were undercutting them, Sri Tiawati has had to deal with tribal enmities and petty jealousy.

Perhaps envious at Sri Tiawati's success in getting the school up and running, the neighboring Belusu group -- with which her nomadic Punen people have what she called "a complicated relationship" -- started issuing threats and spreading baseless rumors that she was getting a lavish government salary.

"I was threatened I would be murdered, they would stick my head in front of the school," she said, recounting how she was unable to get back to the village for more than a month due to the threats.

"I still have many challenges at my school," she said. "But I will keep trying."