Hong Kong's flagship airline Cathay Pacific will cut 96% of its passenger capacity in April and May after seeing its load factor drop to 53.1% in February.   © Reuters
Industry in focus

BANGKOK/TOKYO -- Hanging in the balance amid the global crisis surrounding the novel coronavirus, Asian airlines are struggling to maintain proper operational efficiency.

The outbreak of the virus has limited the globalized movement of people. Although the epicenter of the epidemic has shifted from China to Europe, according to the World Health Organization, regional transmission of the virus has become largely apparent in most of the countries and regions in Asia.

Aside from the public health impact, the damage wrought on business has become more clear as national flag carriers in Asia revealed their February operational data. Thai Airways International reported last week that it carried 1.19 million passengers in February, a sharp drop of 23% compared with the same month a year ago.

The airline's load factor fell to 70.8% from 81.9% in February 2019. This is barely above the 70% level, which is widely recognized as the lowest level for any routes to maintain profitability. When looking at passenger load by region, Asia's numbers fell to 58.2% from 78.0% last time, while those in Europe remained as high as 82.5%.

Hong Kong's flagship airline Cathay Pacific Airways carried 54% fewer passengers in February, with its load factor down to 53.1%. The airline on Friday announced it will cut 96% of its passenger capacity in April and May, following a 65% reduction in March. Its low-cost carrier unit HK Express will go further, grounding all flights from Monday until the end of April.

"We are facing an unprecedented challenge as the COVID-19 pandemic continues to cause widespread disruption to our operation and business," Cathay Pacific Group Chief Customer and Commercial Officer Ronald Lam said earlier. "In February alone, we made a significant unaudited loss of more than 2 billion Hong Kong dollars ($260 million) at the full-service airline level." Fear surrounding the pandemic has prompted Asian governments to take increasingly severe measures to try to contain it, including city lockdowns or store shutdowns, further interrupting the flow of travelers. Airline companies are emerging as the primary economic victims.

Singapore Airlines on Monday announced that it will be cutting 96% of its capacity until the end of April. As a result, the group will ground 138 of its 147 aircraft. The announcement came a day after the Singapore government said it will bar all short-term visitors from entering or transiting through the country beginning late Monday evening.

To mitigate the impact, the company said it "is engaging in discussions with several financial institutions for its future funding requirements." It is also negotiating with aircraft makers to defer upcoming plane deliveries.

Two budget airlines based in Thailand are also paring back. Thai AirAsia has suspended international flights through April 25, and Thai Lion Air will suspend international and domestic flights from March 25 to April 30.

Like their regional peers, mainland Chinese airlines have seen their passenger load factors fall off a cliff. China Southern Airlines' figure dropped to 47.1% in February from 85.2% a year ago. Two other major state-owned carriers -- China Eastern Airlines and Air China -- fared only slightly better, with 50.3% and 51.4% respectively.

The smaller carriers were in a similar state. Shanghai-based Spring Airlines held out relatively well at 63.7%, but passenger load factors for Juneyao Airlines and Hainan Airlines Holding, an HNA Group company with eight domestic airlines under its wing, both dipped below 50% in February.

For all mainland China airlines, the largest fall came from their Hong Kong links, due to the ongoing social unrest in the territory since last summer.

Chinese airlines carry the statistical label of "regional," which includes services to Hong Kong, Macao and Taiwan, since Beijing considers all these destinations to be domestic -- though in reality they come under separate immigration and customs controls.

The February load factor for the top three airlines under this category, of which Hong Kong occupies a good portion, only reached about 35-36%. The virus has exacerbated their overall poor performance.

China Southern said in a statement on Wednesday that the Guangzhou-based carrier "will strengthen capacity control and explore market demand to closely track market trends" as travel demand remains weak due to the pandemic. 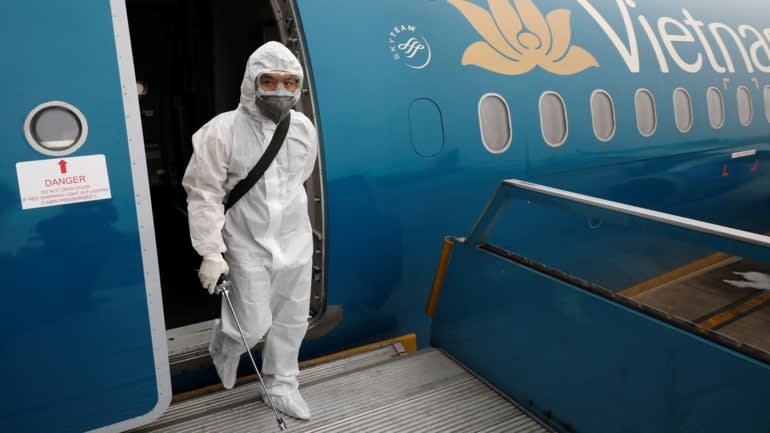 In a statement, China Eastern said "the demand and willingness of passengers to travel have been significantly reduced." The Shanghai-based airline has vowed to "actively optimize and adjust its transportation capacity deployment in the future."

At the moment, no airline carriers expect the world to return to normal any time soon. Deeper economic damage is expected for March as European and Asian countries resort to city or nationwide closures to contain the pandemic.

"The situation has further deteriorated since February," said Cathay Pacific's Lam. "Our advance passenger bookings show no clear signs of recovery at this stage, and the gap in bookings compared to 2019 continues to widen."

"In March, April and May, we are considering reducing flights by 20%," said Soradej Namruangsri, Thai Airways executive vice president of operations.

The CAPA Center for Aviation in its report last week warned that most of the world's airlines face bankruptcy within two months. The International Air Transport Association in its analysis on March 17 predicted that the new coronavirus outbreak would result in passenger revenue losses of up to $113 billion globally in 2020.

Singapore's OCBC Credit Research presented a scenario in which it assumed that Singapore Airlines' passenger revenue will drop to zero and will only earn cargo revenue for the quarter ending June.

Stating that the assumptions are not far-fetched in the given environment, the research firm's analyst Ezien Hoo wrote that "this indicates a high likelihood that its committed unutilized banking facilities and existing cash balance would barely cover Singapore Airlines' cash gap from operating expenses."

Hoo pointed out that Singapore Airlines would need to seek external funding either from its banking relationships or possibly from its major shareholders. 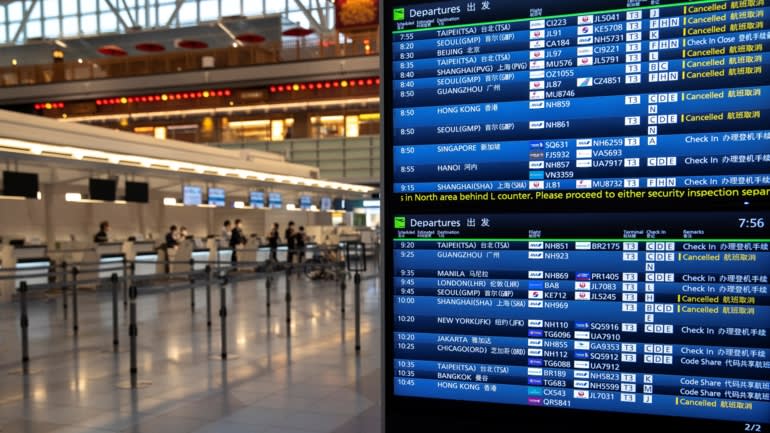 Asian airlines are seeking ways to scramble out of the mire.

Thai Airways has chosen to change its captain to find a way through the crisis, with President Sumeth Damrongchaitham to resign from April 11. The survival of the company will then depend on the leadership of Chakkrit Parapuntakul, who was assigned as acting president on Wednesday.

The national flag carrier's employees are now encouraged to take unpaid leave until June 30. Company executives have reduced their salaries by 15% to 25% between March and August. The board of directors also agreed to reduce their remuneration by half, with all these measures parts of its efforts to cut expenses by 30%.

Thai Airways had 103 aircraft as of end-December. A source said the carrier had grounded 12 aircraft, apart from another 12 that are undergoing maintenance.

The operator of Pudong International Airport in Shanghai saw its passengers decrease by 81.5% to 1.13 million in February compared with a year ago. Both international airports in Guangzhou and Shenzhen in mainland China also witnessed a fall of about 80%, with monthly passengers dropping below a million people in February.

Hong Kong International Airport's passenger numbers in February were down to 1.9 million, representing a year-on-year drop of 68%, owing to a significant fall on traffic to and from mainland China and Southeast Asia.

The Airport Authority Hong Kong said in a news release on March 15 that it was expecting a continued drop this month as airlines are suspending more flights, and as various jurisdictions continue to implement immigration restrictions and quarantine measures.

As the airport authority predicted, Cathay is cutting back its operations to three flights per week to only 15 destinations from Hong Kong. Lam at Cathay on Friday vowed to "maintain a minimal number of flights to and from key destinations in our network to ensure these vital arteries remain open."

However, the airline warned that even the ability to maintain this so-called "skeleton schedule" could be at risk if further travel restrictions are implemented.