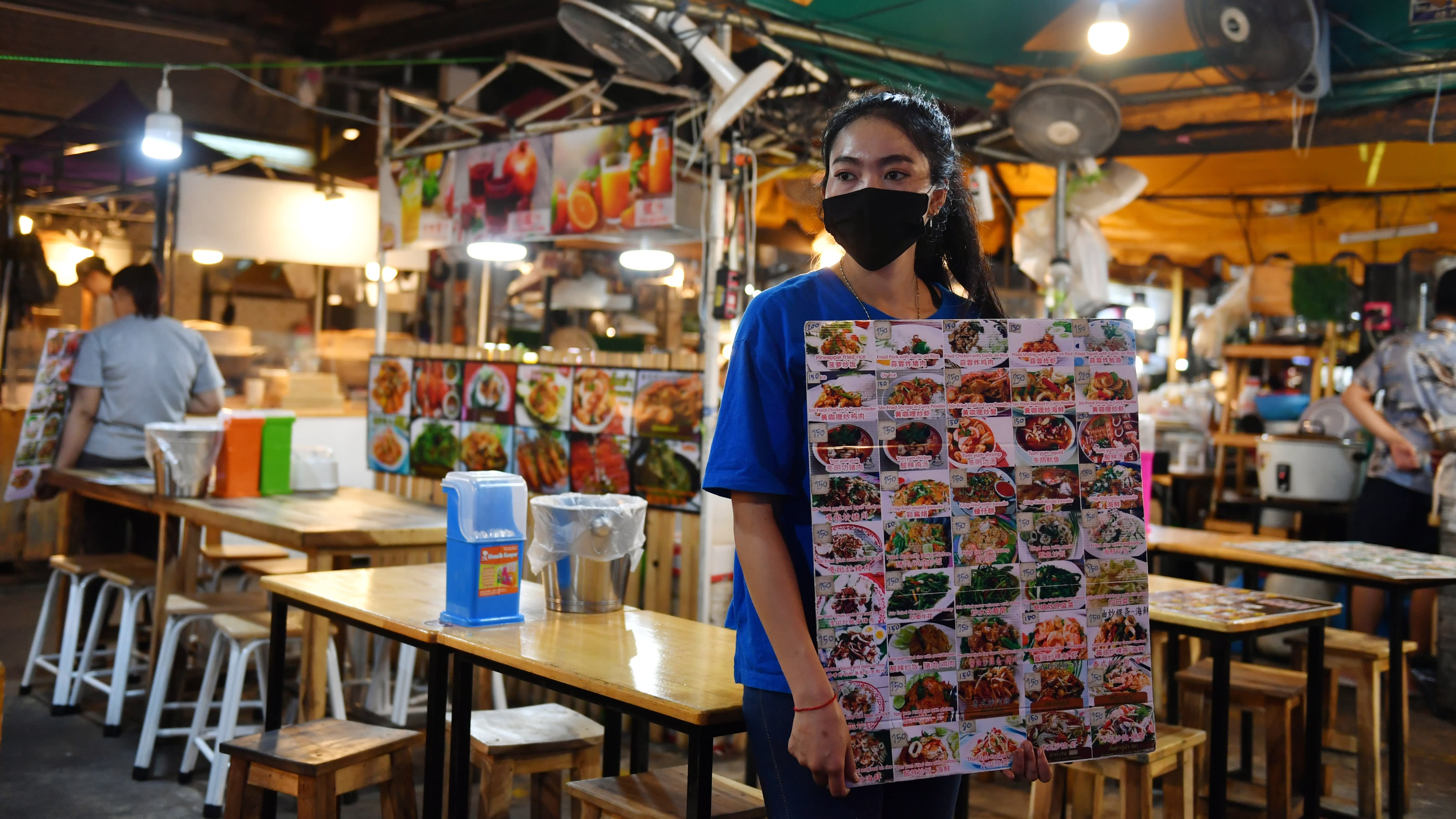 A woman at a restaurant waits for customers in a night market in Bangkok. Facing a drastic decrease in the number of foreign tourists, Southeast Asia's tourism industry faces business shutdowns and even bankruptcies stemming from the coronavirus outbreak.   © Reuters
Industry in focus

SINGAPORE/BANGKOK/JAKARTA -- A resort hotel in southern Thailand's popular beach town of Hua Hin is to close all its operations permanently on Monday, becoming the latest corporate victim of the new coronavirus, which has dampened travel demand in Asia.

In a letter to its employees, the hotel, Banyan the Resort Hua Hin, said it could not carry on making cumulative losses at a time when the number of foreign tourists continues to fall sharply due to the coronavirus outbreak. Like many other hotels in the country, a large portion of its guests had been from China, where the virus originated.

Monday marks the 50th day since Beijing banned outbound group tours on Jan. 27 in an effort to contain the coronavirus, which triggered massive booking cancellations in major travel destinations for Chinese tourists such as Thailand, Vietnam, Singapore, Indonesia and elsewhere in Asia.

Now, after the World Health Organization declared COVID-19 to be a "pandemic" with more than 130,000 infection cases globally, and as more travel restrictions and warnings are put in place, Southeast Asia's tourism industry faces business shutdowns and even bankruptcies as a result of the disease.

As happened after the SARS outbreak 17 years ago, once the pandemic is over, tourism demand will likely recover. Large companies are trying to survive the current downturn with cost cutting, but smaller businesses have less capacity to implement such measures.

According to Kongsak Khoopongsakorn, president of the Thai Hotels Association Southern Chapter, most debt-ridden local hoteliers are now negotiating with their lenders for a debt moratorium. "Everybody is trying to survive and I think some can still move on with their operations, but some may not be lucky and they will have to quit if the situation gets worse," he told the Nikkei Asian Review. Tourism is a major industry for many countries in Southeast Asia. The region welcomed about 30 million Chinese arrivals in 2019, accounting for over 20% of total international visitors. The number was also seven times more than that recorded in 2009 (4.1 million). Some countries rely more heavily on Chinese tourists, who make up 28% of visitors to Thailand and 32% of those to Vietnam, mainly due to geographical proximity and relatively lower travel costs.

The latest official statistics illustrate the severe impact of the current environment on these countries. Thailand's inbound visitor arrivals dropped 44% in February from a year earlier, while Vietnam's dropped 22%, both marking a sharp fall from what had been steady growth until January. Hotel occupancy rates in Indonesia's popular destination of Bali -- where the country's first death from the coronavirus was reported -- are now at a meager 20%, according to Indonesia's Hotel and Restaurant Association.

As a result, businesses that relied on Chinese travelers have been severely hammered. Statistics from Thailand's Commerce Ministry show that eight hotels have filed for bankruptcy this year to mid-February, while 21 restaurants were out of business. Meanwhile, 74% of Vietnamese companies said they could go bankrupt if the coronavirus outbreak and related restrictions last more than six months, according to a government survey reported by local news outlets in early March.

Even in the countries with more domestic-driven economies, "the spillover to the retail sector and the knock-on impact on domestic consumption arising from a sharp drop in Chinese tourists' spending should not be underestimated, as such indirect effects could outweigh the initial direct impact," Singapore's DBS Group Holdings' economists warned in a report issued on March 10. 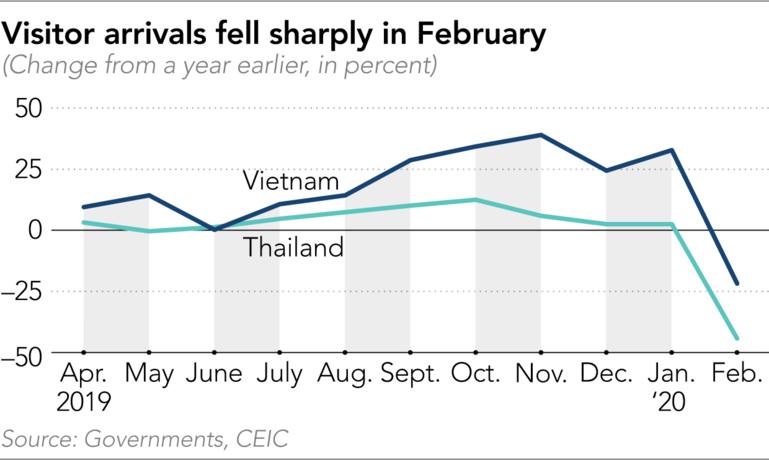 Beyond Southeast Asia, corporate casualties have already surfaced. Fujimiso, a six-decade-old traditional Japanese ryokan inn, is believed to be one of the first bankruptcies in the country resulting from the coronavirus outbreak. The old inn had in recent years relied on Chinese group tourists and suffered a slew of cancellations since January, leading to its closure, credit researcher Tokyo Shoko Research reported.

At least five more coronavirus-related tourism bankruptcies had been reported in Japan as of Friday. These include another ryokan, a cruise ship operator, a sushi restaurant, a Japanese kimono rental service and a travel agency, due to falling demand from foreigners as well as from domestic tourists. Most of these businesses were already struggling before the coronavirus outbreak, with reasons including stiff price competition and weak demand following natural disasters.

In Southeast Asia, a prolonged coronavirus epidemic and related restrictions pose a risk of wide-scale corporate default, as demand begins to wane. Companies based in Malaysia, Thailand, Indonesia, Singapore, the Philippines, Vietnam, Laos and Cambodia have combined debt of $30.8 billion due by the end of this year, according to data from Dealogic.

Thailand, which relies on Chinese visitors and whose tourism industry has been decimated by the outbreak, accounts for a third of the region's total debt, at $11.2 billion, followed by Malaysia, Singapore and Indonesia.

While Southeast Asia's total maturing corporate debt is dwarfed by that of companies based in Japan ($82.9 billion) and South Korea ($35.4 billion), the debt burden may yet prove too much for the many small and midsize enterprises that comprise Southeast Asian economies. "A ban for longer than a month will probably disrupt, or even sever their operations because they are less likely to have funds to cushion the impact," said Syam Resfiadi, chairman of the Umrah-Hajj Travel Agents Association. A growing trend which has seen about 1 million people a year taking part in umrah, or a pilgrimage to Mecca that can be taken at any time of the year, Resfiadi said that the ban would result in a monthly loss of some 2 trillion rupiah ($134 million) among travel agents offering such tours.

Against this backdrop, governments in Southeast Asia are racing to provide support measures for the coronavirus-hit businesses, especially for vulnerable smaller companies.

The Indonesian government has said it will exempt restaurants and hotels at selected tourist destinations from some regional taxes for six months, starting from April. It also unveiled on Friday its second stimulus package worth nearly 1% of its gross domestic product, or 125 trillion rupiah ($8.5 billion). It included relaxation of income tax for individuals and companies and relaxation of loan payments for micro, small and medium enterprises. General view of the Kaaba at the Grand Mosque in Mecca on March 6, after Saudi authorities suspended Islamic pilgrimages to the city. Travel agencies in Indonesia have been hit hard by the ban.   © Reuters

Singapore Prime Minister Lee Hsien Loong said Thursday in a televised message that the government was preparing a second package of relief measures to cushion the economic impact of the outbreak, following a $4 billion package announced last month which included a 30% property tax rebate for hotels.

"We will help our companies with their costs and cash flow, to keep them afloat through the storm," Lee said, calling for preparation for the time when the disease crisis has passed. "We will help our workers keep their jobs, and retrain during their downtime, so that when things return to normal, our workers will be the first out of the gate, and immediately productive."