GURUGRAM, India -- Jeetender Sharma likes to gamble. Or at least one would think so, judging from his decision to build a new electric motorcycle factory capable of cranking out 1 million units annually -- roughly eight times more than the number of e-motorbikes sold across all of India last year.

Sharma, founder and managing director of Gurugram-based startup Okinawa Autotech, decided in May to invest 2 billion rupees ($28 million) in the plant and new product development. The factory's opening, scheduled for next spring, will add to his company's existing production capacity of up to 180,000 units.

The 4-year-old, family-owned venture's expansion would seem ambitious at the best of times. But it looks especially risky now, after a sudden change in government policy wiped out subsidies for most of the electric bikes on the market.

In fact, Sharma aims to capitalize on the new, tougher regulations. The Indian government wants e-bikes to succeed to help its fight against severe pollution, so much so that it is looking to ban most fossil fuel models. Traditional motorbike sales in India -- the world's largest two-wheeler market -- have hit the skids.

Put another way, India's massive market is about to be electrified on a large scale. This would create a new world leader in electric vehicle production and usage, right alongside China.

Sharma is not the only entrepreneur who sees the makings of a boom. Several of his competitors are doubling down on production lines, backed by powerful investors like Sachin Bansal of Flipkart fame and Taiwanese scooter maker Kymco. 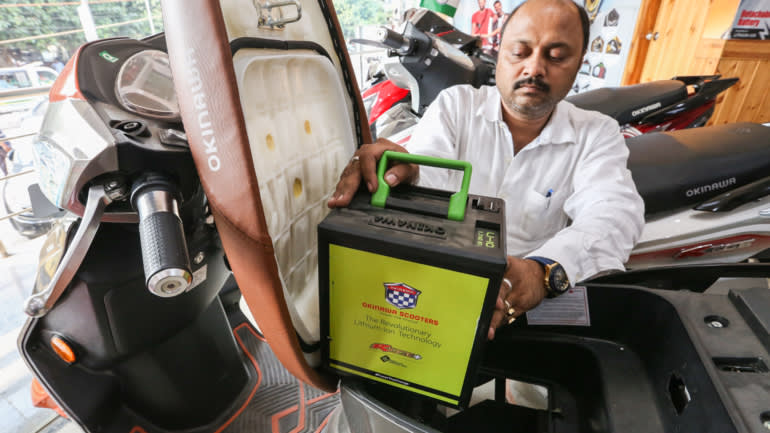 India's annual two-wheeler sales top 20 million units, far ahead of the 4.4 million cars and trucks. The electric segment remains small but has been growing rapidly: Sales more than doubled to an estimated 126,000 in the year ended March, from 54,800 units the previous year, according to the Indian Society of Manufacturers of Electric Vehicles.

The growth was largely driven by a government subsidy program known as Faster Adoption and Manufacturing of Hybrid and Electric Vehicles, or FAME. Launched in 2015, the scheme doled out 7,500 to 22,000 rupees to buyers of virtually any battery-powered two-wheeler, regardless of range and other specifications.

Then, on April 1, without much consultation with the industry or consumers, the government switched to what it calls FAME 2.

The revamped program sets high bars for eligibility: a minimum travel range of 80 km per charge, a top speed of 40 kph or faster and a minimum battery capacity of 2 kilowatt-hours. The bikes must be powered by lithium-ion batteries and equipped with regenerative-energy braking systems, which capture kinetic energy to increase efficiency. Domestically made parts must account for at least 50% of the final product cost.

The rules were meant to encourage the spread of more advanced, greener vehicles. But it was a shock because very few existing products met the criteria. While there are no reliable statistics available, industry insiders say FAME 2 was a major disruption.

Meanwhile, the overall Indian vehicle market -- including conventional motorcycles -- has been stuck in one of its worst slumps ever since last fall. In August, domestic sales of all two-wheelers were down 22% from the same month a year earlier, marking the ninth straight monthly decline.

The slowdown has been blamed on a mandatory insurance requirement imposed in summer 2018, as well as sluggish household income growth and fear of a ban on gasoline models. But industry insiders say the impact of the insurance rule is wearing off, and the prospect of a ban only benefits electric vehicle makers.

Okinawa's Sharma said he decided to build his new factory for two reasons. First, he sees the electric vehicle market and the broader auto market as distinct. "The EV market is at a nascent stage and we feel no impact of the overall automobile slump," he said.

Second, he considers FAME 2 a "positive" for Okinawa. Some of the company's bikes qualified for the new regime in May. Most other manufacturers only released eligible models a few months later.

Sharma claimed Okinawa sold 45,000 bikes in the year through March, although the Society of Manufacturers of Electric Vehicles counted a smaller number for Okinawa in the same period. This year, Sharma expects sales volume to hit around 100,000 units.

"We expect the full capacity of the new plant will be utilized within three to four years," he said. His rivals are powering up, too.

Ather Energy, another electric two-wheeler startup, raised $51 million in a Series C funding round in late May. Bansal, who co-founded Flipkart before selling a majority stake in the e-commerce company to Walmart, and Hero MotoCorp, a former Honda Motor joint venture that ranks No. 1 among India's gasoline motorcycle makers, both invested in the Bengaluru-based venture.

Ather can produce 30,000 e-scooters a year but, like Okinawa, it is aiming for the 1 million mark. It hopes to get there within five years. It also plans to install 6,500 charging points across 30 cities in India by 2023.

The Hero Group, a family-run conglomerate that co-founded Hero MotoCorp with Honda, already has the Indian industry leader in electric two-wheelers by sales volume -- Hero Electric Vehicles. In mid-July, Hero Electric revealed its plan to expand production capacity to 500,000 units within three or four years, from the current 100,000, with an investment of around 7 billion rupees.

Yet another contender is Taiwan's Kymco. It announced in mid-June that 22Kymco, a joint venture with Indian electric two-wheeler startup Twenty Two Motors, was launching production at a new plant. The Taiwanese company is reported to have invested $15 million in Twenty Two, and will pour $50 million into the Gurugram joint venture to expand production capacity and battery infrastructure in the next few years.

These and other manufacturers believe they can make a compelling case to consumers.

They say e-scooters generate energy costs in the range of 0.1 to 0.2 rupees per kilometer, versus 1.4 to 2.5 rupees for gasoline motorbikes, depending on engine efficiency and traffic.

Armed with those numbers, buyers have been doing some math.

Say an e-scooter costs 0.15 rupees per kilometer, and a comparable gasoline bike costs 1.5 rupees. The e-bike would be 1.35 rupees cheaper to ride 1 km, or 54 rupees per 40 km -- a common daily commuting distance.

That translates into 16,200 rupees of savings over a 300-workday year, and 81,000 rupees over five years, or a typical ownership period.

An e-scooter with more than 80 km of range and a top speed above 50 kph sells for roughly 50,000 rupees more than a premium-brand gasoline model. But the energy cost savings over five years should more than make up for the difference. Factor in a FAME 2 subsidy, and the e-bike becomes even more cost-effective. Electric motorbikes have already proved practical in China, where more than 1 million are estimated to have been sold in 2018 alone. Over 3 million electric two-wheelers are running on Chinese roads. By contrast, India's total e-fleet appears to be about 400,000 to 500,000 units, based on accumulated sales over the past decade.

If electric bikes overtake old-fashioned models in India, it could have powerful effects not only economically but also environmentally. Replacing millions of exhaust-spewing bikes with electric alternatives would help combat the air pollution that plagues Indian cities.

This is why ministers and senior officials in the perpetually smoggy Delhi area want to make India a "global EV hub."

So far, the efforts have been haphazard. In March 2018, Prime Minister Narendra Modi's cabinet ministers went public with discussions on a goal to have electric vehicles account for 30% of all vehicles on Indian roads by 2030. This appears to remain the objective today, though no declaration has been made.

This past June, the government think tank NITI Aayog, which is chaired by Modi himself, revealed a proposal to ban two-wheelers with fossil-fuel combustion engines of up to 150 cc on March 31, 2025. This is ambitious, considering sub-150 cc models accounted for 86% of two-wheelers sold in the year ended March. But again, the goal is not official.

One thing the government has actually done is cut the Goods and Services Tax on electric vehicles to 5%, from 12%. The new rate took effect on Aug. 1. Gasoline vehicles, meanwhile, are taxed much higher, at 28%.

It is unclear how much Modi's mix of regulations and incentives will promote greener mobility. Ultimately, economic logic may be a more powerful force for change. One after another, food delivery services and ride-hailers are announcing that they are adopting electric vehicles because they are cheaper to run; consumers are likely to follow.

While incentives can certainly give sales a fillip, Ernst & Young consultant Som Kapoor believes that "economics will drive the EV shift" rather than government policy.

Indeed, business was bustling at Garud Automobiles, one of Okinawa's major dealers in Delhi, on a public holiday in early October.

"I feel only a rising interest in EVs among consumers," said Ishwar Mangla, who owns the dealership. He only started selling e-bikes after FAME 2. "Sales are going up, and I'm not facing any damage by FAME 2. Not only from individuals, but we are receiving orders from delivery pizza chains as well. I am glad I started this business."

A shopper who had just purchased a new Okinawa e-scooter that did not qualify for FAME 2 said he bought it because he was "really worried about air pollution."

"I did not care about the subsidy much," he said, explaining that he plans to ride the scooter to the construction site he oversees. This entails about 30 km of daily travel, well within the vehicles range of 60 km per charge.

"I will see if it really works well for our work," he said. "If it does, we will buy more."