Food delivery drivers dance with death for Alibaba and Tencent

HONG KONG/SHANGHAI -- Lu Zhiyin hops on his electric scooter, bracing for the battle ahead.

The deliveryman for Chinese food takeout service Ele.me races against the clock every day, speeding side by side with cars and dodging obstacles. He has a mobile map to guide him but rarely stops to study it.

"We went the wrong way," Lu sighs. With a glance at his rearview mirror, he hangs a U-turn, heading back against the Shanghai traffic.

"I'm afraid of being late," the 29-year-old explains. Lu earns 7 yuan (99 cents) from each timely delivery. Delays can cost him far more: Ele.me fines drivers who fail to reach destinations on time, on top of a possible 50 yuan penalty if a customer complains.

Ele.me and its larger competitor Meituan Dianping are scrambling to keep hungry Chinese customers happy. Analysts say food delivery not only yields billions of dollars in revenue each year but could also determine the fortunes of the rivals' respective backers -- the powerful Alibaba Group Holding and Tencent Holdings -- in digital payments and other fields. But as front-line warriors, Lu and millions of drivers like him stand a real chance of becoming casualties.

A tragic example came in August when Typhoon Lekima, the fifth-largest cyclone in Chinese history, hit Shanghai. Despite a red alert from the weather authorities, Ele.me and Meituan sent their teams out. An Ele.me driver entered a flooded parking lot and never returned.

Braving death to deliver a meal is nothing new. Back in 1993, U.S. chain Domino's Pizza had to withdraw its 30-minute guarantee following numerous accidents and costly lawsuits. More recently, Taiwan reported three deaths linked to food deliveries in five days in October. Related accidents in South Korea hit 568 in the first seven months of this year -- twice the figure for all of 2016 -- according to local news site Newstapa.

Worldwide, it is becoming clear that the convenience of the digital economy comes at a price for the people who make it possible. Amazon.com faces criticism over harsh conditions in its vast warehouses. Ride-hailing and delivery "gigs" that promised flexibility have turned out to mean low pay, long hours and high risks.

Nowhere are those risks greater than in China, many believe. Ele.me and Meituan alone deploy a total of at least 5.7 million delivery personnel. These drivers have been thrust into a cutthroat competition that raises the danger. Generally, deliveries within a 3 km radius must be completed in about 30 minutes, including cooking time. This makes safe driving virtually impossible, according to interviews with over a dozen drivers for the two companies. While the penalties for delays vary, all the drivers Nikkei spoke with said late deliveries dent their earnings.

In some cases, being one second late means losing half a payment.

Meituan and Tencent declined to comment, while Ele.me did not respond to the Nikkei Asian Review's repeated inquiries. An Alibaba spokesperson said that "courier safety is of the utmost importance to us."

The stakes are certainly high for the companies. China's food delivery transactions last year totaled 500 billion yuan, or $71 billion, according to investment bank Bernstein. The value is expected to triple by 2023. Not bad for a market that was virtually nonexistent five years ago.

More importantly, food delivery is part of a much larger war between Alibaba and Tencent. China's top two internet companies are clashing over everything from lifestyle services to advertising and cloud computing. Since everybody eats, analysts say success in food delivery will help Alibaba or Tencent attract more users to their platforms.

For now, Meituan is the undisputed delivery leader, with a 52% market share in the first half of this year, market research firm Analysys reported. On its own, the business founded by Delaware University dropout Wang Xing in 2010 is China's third-largest internet company by market capitalization, trailing only Alibaba and Tencent.

But Alibaba is not going to let Ele.me go down without a fight. 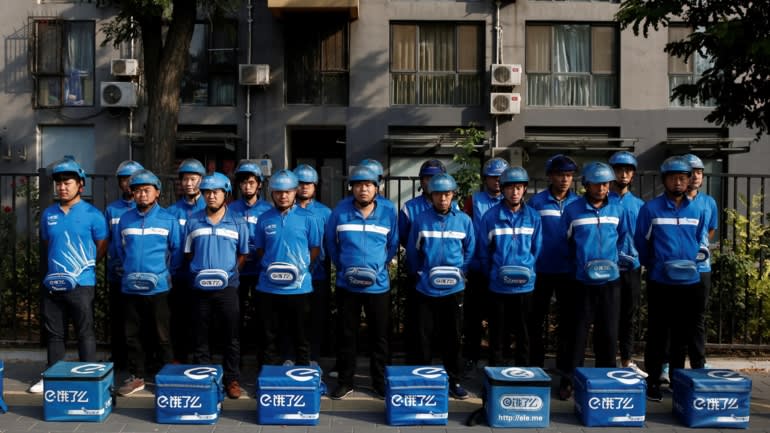 The front-line warriors: Ele.me drivers stand at attention during a morning briefing in Beijing.   © Reuters

Alibaba acquired Ele.me at a valuation of $9.5 billion in April 2018. In November, before Alibaba's secondary listing on the Hong Kong Stock Exchange, the e-commerce giant said it would use some of the $12.9 billion in proceeds to expand the food delivery business.

"Alibaba invested in food delivery services strategically, focusing on reaching more new users, and gaining more synergy effects in its ecosystem," said Danny Law, an analyst with Chinese brokerage Guotai Junan International. As part of this, under Alibaba, Ele.me has poured 3 billion yuan into marketing and subsidies to widen its customer base.

But even Alibaba can only burn cash for so long. Market watchers see both competitors shifting from an emphasis on low prices to better service.

Speed is the second most important factor when Chinese customers choose a takeout platform, after only food safety, a study by Beijing-based Big Data Research found. So not only have Ele.me and Meituan essentially revived Domino's 30-minute guarantee, they have refined it by offering "insurance polices" against long waits.

Last year, Ele.me gave customers the option to pay a small premium on their order value in exchange for 25% back if it is delayed 15 minutes, and a 70% refund for 30 minutes. Meituan quickly matched this.

The time limits are in effect rain or shine. While the compensation is not directly deducted from drivers' payments, many believe that the companies recoup at least some of the insurance payouts by penalizing them.

To avoid the penalties, Lu guns his e-bike at about 50 kph on Shanghai streets where the speed limit is half that. Red lights are the same as green ones for him, he said, adding, "It's normal for us to risk our lives at work."

While Lu has managed to avoid accidents so far, he said colleagues have had three in a single month.

Shanghai saw an average of two accidents involving delivery drivers per day in the first half of 2019, government statistics show. Ele.me contributed to 111 cases, or 34.2%. Meituan was just behind at 109.

"I believe 80% of these accidents were caused by insufficient delivery time," said Yu Yong, a Meituan deliveryman. "Only those who drive fast enough can make it."

Being fast enough is the only way to earn enough.

Like most gig economy players, Meituan and Ele.me do not pay delivery personnel basic salaries even though many work full-time. Instead, they pay per order.

If a deliveryman consistently turns down orders, the system will automatically send fewer jobs to that driver, making it even harder to earn a living.

Close calls are common. Pan Jiang, who drives for Ele.me in Shenzhen, recounted a recent accident. The 31-year-old father of three admitted he was speeding when a motorcycle up ahead made a sudden turn. "I hit the brake but my bike was going too fast to stop." The next thing he knew, he was bleeding on the ground.

Pan said the experience did not make him more careful. "At peak times, I have 13 orders to deliver in less than an hour. I'm so stressed. The only thing I care about is to deliver food as quickly as I can."

Meituan says it has shortened delivery times largely thanks to artificial intelligence and other high-tech systems, which help match drivers with orders and plan routes. But drivers argue technology is not a silver bullet.

Navigation systems can do more harm than good. A screenshot of Meituan's app shared by one driver showed a shortcut through a walled office complex, which looked promising on the map but was impossible in reality. Since the app calculates the acceptable time based on the suggested route, the deliveryman had to speed to compensate.

The media is scrutinizing the industry, too, including Communist Party mouthpieces. After the death of the Ele.me driver in the typhoon, the state-owned Guangming Daily wrote: "Even airlines and train operators have to suspend their services during typhoons due to safety considerations. ... How can food delivery drivers withstand the threat of extreme weather?"

Both Meituan and Ele.me send drivers in-app safety tips. But Qu Xiaoping, a 22-year-old Meituan driver in Shenzhen, and many others call the training and advice "completely useless."

"On one hand, the company asks us not to run red lights," Qu said. "On the other, they have shortened our delivery time. How can we make it if we respect the red light?" Drivers are skeptical that the emphasis on speed will ever change. "If one platform slowed down," one said, "no customers would choose them."   © Reuters

Qu's and many others' demands for more time have gone unanswered -- underscoring a sense of powerlessness among the troops.

The majority of drivers hail from rural areas and struggle to find work in China's teeming cities. Most are hired through recruitment agencies, meaning they cannot convey their concerns to Meituan or Ele.me directly.

"It is unthinkable that food takeout platforms would give us more time," said Li Ning, a 33-year-old female Ele.me driver in Shenzhen who recalled leaping off her bike to avoid an oncoming car. "If one platform slowed down, no customers would choose them."

Lu in Shanghai is not holding his breath for extra minutes, either. After the typhoon, he said the only change at Ele.me was that drivers were asked not to speak with the media.

"Quick delivery is the core of food takeout platforms. I don't see how they are ever going to change that," he said. "When generals fight, it is the soldiers who suffer."

Names have been changed to protect drivers' identities. Additional reporting by Eduardo Baptista in Hong Kong.