In Cambodia's boomtown, a gamble on Chinese money goes sour

SIHANOUKVILLE, Cambodia -- On a Saturday afternoon late last year, dozens of dealers lounged around DV Casino waiting for their last paycheck. While they waited, workers hauled furniture out of the building's column-fronted entrance.

Management had announced just the day before that the Chinese-run casino, which had opened less than a year ago, was closing indefinitely for "maintenance."

"They said they have to install a sewage system," one dealer told the Nikkei Asian Review, as several webcam-equipped gambling tables sat empty nearby. "We think they're closing because many of the Chinese have gone back to their homes."

DV is just one example of how Sihanoukville, a city whose runaway growth was fueled by Chinese money and online gambling, abruptly lost its main engine. 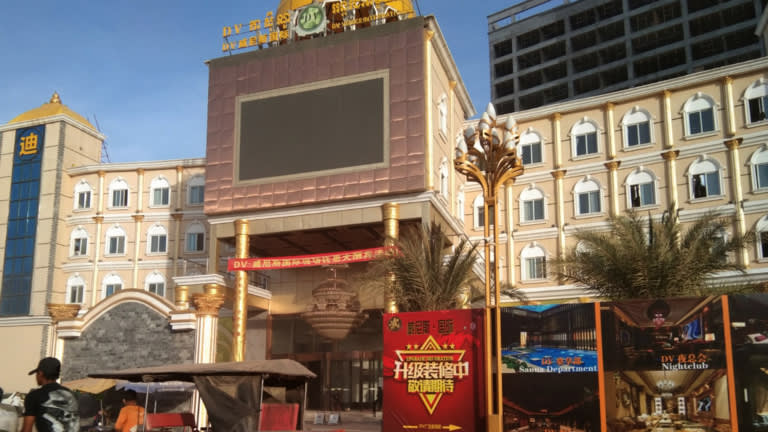 DV Casino is one of several in Sihanoukville impacted by the online gambling ban announced last August. (Photo by Shaun Turton)

Beijing has pledged billions for infrastructure in Sihanoukville, including a $2 billion expressway linking the coastal city with the capital Phnom Penh, while Chinese companies have invested in SEZs, ports and power stations.

But alongside the official works came speculative money, much of it funneled into casinos, the number of which had ballooned to more than 70 by late last year. Many locals, meanwhile, borrowed big to invest in property and other businesses aimed at serving the influx of Chinese workers.

Before long, the gambling-fueled investment boom had transformed a sleepy backpackers' destination into a "chaotic construction site."

Ben Lee, head of Macau-based consultancy IGamiX, which studied the gaming sector in Sihanoukville prior to the ban, puts its revenue "conservatively" between $3.5 billion and $5 billion a year. Of that, Lee estimates, a staggering 90% came from online gambling.

"Whilst land-based casinos do abound, however, what was funding the land-based casinos, or most of them, was the online portion ... generating the bulk of the income," he said. He estimates there were around 200 online operators prior to the ban employing more than 200,000 people.

The boom turned to bust in August, when Prime Minister Hun Sen unexpectedly announced that Cambodia would criminalize online gambling. Of 72 casinos in the city, four are shutting down and 23 have laid off employees, with more than 7,000 workers affected, according to Ministry of Labor officials.

The decision to shutter the lucrative industry was widely seen as a result of pressure from Beijing. Chinese authorities had come to view Sihanoukville as a haven for gambling sites targeting players in mainland China, as well as a base for internet scams, money laundering and criminal gangs.

How effective the ban will be in tackling crime remains to be seen. The Philippines is also grappling with crime related to online gambling, though Manila has so far resisted Beijing pressure to outright ban the industry. But for Cambodia, it has already brought home an additional painful lesson: relying too heavily on Chinese cash can be a risky bet.

Over the weeks that followed Hun Sen's announcement, thousands of Chinese workers departed Sihanoukville, leaving behind them stalled projects, debt-saddled local developers, broken infrastructure and a mass of shuttered businesses. 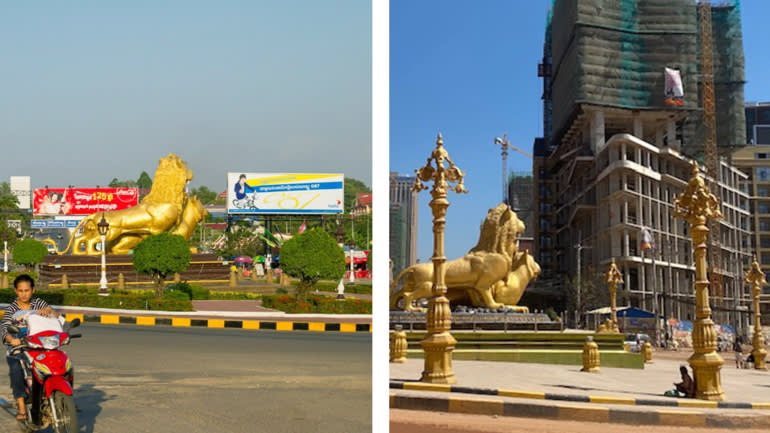 Reports of how many people have left the city vary -- local media has cited figures of more than 100,000 -- but one indication comes from a recent survey by the Federation of Business Associations of Sihanouk Province, a newly formed group representing Chinese businesses.

Since August, almost 800 restaurants have shut and daily orders have plummeted by more than 80%, the survey found. Restaurants' daily earnings have fallen from an average of $1,500 to $200, while monthly earnings from food delivery dropped from $3,000 to $800.

Despite a glut of unfinished buildings, the 22-year-old said he is struggling to find work.

"If I can't get work in the next few days, I'll go home," Sothear told Nikkei, pointing out the concrete skeletons of several stalled projects nearby. "They're all stuck," he said. "Many sellers are currently sitting tight, holding on to their land until such time as prices are once again on the increase," Hodge said. This has stabilized the market after "some initial softening" in land and sales prices.

The biggest impact, he said, was on the rental market, with commercial rents dropping by about 30% and hotel rates decreasing by up to 50%, roughly back to pre-boom levels.

While the decline has been hastened by the gambling ban, Kim Heang, CEO of Khmer Real Estate, said the slowdown could be traced to June, when a building under construction in Sihanoukville collapsed, killing 28 workers. The tragedy prompted authorities to review projects and better enforce safety standards. They have since shut down more than a dozen sites.

But for locals who bet big on the good times continuing, it was the ban that dealt the decisive blow. Rescuers search for survivors amid the rubble of a collapsed building in Cambodia's Sihanoukville on June 22.

Many took out loans to build properties to rent to Chinese workers or start a business to cater to the surging demand. "It was high reward, but high risk," Heang said.

Cambodian social worker Mab, who asked his surname not be used, went into debt to build a second house and buy five luxury cars to rent out. After the ban, none of the vehicles were returned. He later found one at the airport and four more parked at different casinos.

The father-of-two -- whose wife is pregnant -- has now sold his fleet, at a discount of 50 cents on the dollar, as well as his family's house to begin paying off the loan.

The stress remains immense, he said. "In four months, I've lost about 9 kg."

Teacher Leang Sophanna borrowed half of the $600,000 he used to build a 20-room condo complex in Sihanoukville. A casino manager rented the building for $18,500 per month until the ban was announced, at which point he abruptly left. Unable to find new tenants, Sophanna said he has taken on extra teaching shifts to make repayments. Others were in a worse situation, he said.

"Many are in tears because they borrowed money from the bank," he said, adding he expects many residents to begin selling off assets in the months to come. "This is a huge problem."

Despite the heavy debt loads, many of those who took out loans remain optimistic about the city's future, hoping it can now follow a path of more sustainable, if slower, growth.

Khan Khonnara and her husband, who extended their guesthouse amid the boom, believe tourists will return to the city, though they say inflated prices for food and other everyday items are discouraging visitors.

Vann Thy, who works for a Hong Kong developer and also built property to accommodate now-departed Chinese workers, thinks the city is still well-positioned, saying the ban will be good for its future.

"Sihanoukville could be the modern city of Cambodia," he said. "It's a multiple economy zone it doesn't depend on just one category but we have the train, the airport, the seaport, we have very nice islands and special economic zones. If the government tries to change completely, Sihanoukville will be better."

That optimism is shared by Chinese workers and entrepreneurs who remain in the city like Ye Jiankang, who arrived in July from Sichuan province with his wife. While he intended to find work in construction, the pair now run a noodle stall inside a new mall.

Like several of his compatriots who spoke to Nikkei, Ye pointed to China's Belt and Road investments in Sihanoukville as a reason to remain hopeful.

"We will stay and find a way to support ourselves," Ye said, adding he has asked his cousin to join them. "It's hard back in China. Even if there's stability, it's not dynamic." Chinese investment has sparked a massive construction boom in Sihanoukville.

Yu Peng and Yang Degang, leaders of the Association of Overseas Sichuan and Chongqing Compatriots, also pointed to Cambodia's dollarized economy and lack of capital controls as advantages for business in Sihanoukville.

Yang, an electroplating factory owner, said many Chinese migrants had arrived in the coastal city after seeing their businesses in China decline. At the end of 2018 and start of last year, he said Sihanoukville was the "hot topic" on Chinese social media.

"We imagined Sihanoukville to be a place with gold everywhere," he said. In reality, he found the city to be like a "chaotic construction site." But while it had been "hit hard" by the gambling ban, Yang says he plans to stay.

"Chinese people are very resilient. We stay here because under the bubbles, there is beer."

To better organize following the ban on online gambling, about 50 Chinese business and interest groups in Sihanoukville have come together to establish the Federation of Business Associations of Sihanouk Province.

Its headquarters, on two levels of a high rise in downtown Sihanoukville, houses members including organizations representing different Chinese provinces, a PLA veterans group, Chinese media outlets, a Taoist association and a rescue crew on call to help people in distress.

The federation's executive president Chen An, said the group wants to bridge the divide between the Chinese and Cambodian communities, a relationship seriously damaged by the scale and speed of Sihanoukville's development.

He said the aim is to foster a positive business environment for those "with a stake" in the city's future. An abandoned building in Sihanoukville: The sudden ban on online gambling has sucked money out of the Cambodian city.

"Where you used to see exponential growth, those times are gone and are not going to come back. Now it's going to be more linear growth, which is healthy. In the past, because of the rapid growth, a lot of business ethics were disrespected."

But simply popping the bubble does not remedy the entrenched problems facing the city, most pressingly a lack of adequate infrastructure.

With the city chosen to host the region's leaders at the 2022 ASEAN summit, the government knows the coming months will be crucial in getting their coastal boom town back on track. Asked by Nikkei about the state of the city at a recent event, Interior Minister Sar Kheng acknowledged that authorities are in a difficult position.

"But now we are working hard to find a way to control security and order and development in the province."